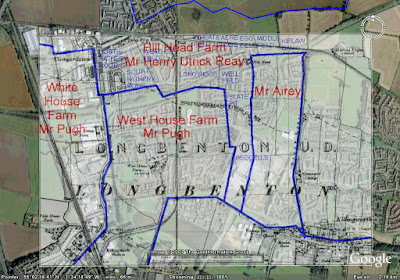 Camperdown didn't come into existence until around the 1820s. South of the main road that passes through the villages the lands that Camperdown would later stand on were at one edge of Killingworth township, which was in turn part of Longbenton parish. It was held as part of the barony of Merlay (Morpeth). Land within the township was held and tenemented by many individuals and institutions, the main ones being the Killingworth family.

1373 - A detailed survey (written) was made of Killingworth in this year. The township was divided into fields (more than twenty named) and within each field the various landholders farmed strips, or selions, of land. Fifteen landholders are mentioned as holding tenements in Killingworth and strips of land scattered among the fields. One of the fields mentioned is Dimisdale (Dymmyngesdale). This name survived until the 18th century and can be identified with the lands abutting Burradon Township

1704 - The last male heirs of the Killingworth family, Oliver and Luke, were by this date dead and the lands that they had held in Killingworth were divided out between their sisters: Mehitabel, Deborah, Blandina and Bethseba. Dimisdale was assigned to Mehitabel Killingworth, wife of Thomas Partis.

c. 1737 - Dimisdale farm and other lands in Killingworth were sold to John Williams of the Close Gate glass house.

1767 - John Williams sold his land and property in Killingworth to George Colpitts. Colpitts was to pay a land tax of £8 4s. 9d. in this year and again in 1779. This is just short of the figure for Burradon Township. We can therefore calculate that he held about 500 acres

1790 - Elizabeth Harrison, the niece and heiress of George Colpitts, married Henry Utrick Reay of Co. Durham and brought ownership of the lands by marriage to him.

1793 - The common lands of Killingworth Township were enclosed by a parliamentary act. It is possible that some enclosure had taken place previous to this date - Dimisdale Farm could be almost synonymous with Hill Head farm which survived until the 1960s. Each landholder was allocated a tract of land within the township to enclose, where before they would have had scattered strips and closes throughout the township. This land would become an individual farm each one adjoining the village of Killingworth. Henry Utrick Reay was allocated Hill Head farm, although part of this may have been sold shortly afterwards to the Ogle family of Burradon. Thomas Pugh was allocated West House farm which ran to the line where Moor View now occupies. He was also allocated White House farm which covered the west side of Camperdown where the industrial estate now occupies. See the Ownership Map of Killingworth Farms.

1828 Mar.13 - Henry Utrick Reay died in London. His eldest daughter Elizabeth Anne inherited his lands. She married Matthew Bell of Woolsington. They were to live in Killingworth Hall. He served as a member of Parliament.