1896 - The Cramlington and District Co-operative Society purchased land, from Eustace Smith, to erect a purpose built store. This was opened on 17th July 1897, a large tea and entertainment being provided. The building had two floors consisting of a grocery department, shoe sales and repairs, a drapery department and a dance hall. Eustace Smith had purchased a large land holding in Weetslade from the Brandling family at some time between 1842 and 1896.

1900 Sep - The "Co-op" felt that a butcher's shop was required for their business and Mr Morrison's shop in Camperdown was leased. After only a few weeks this was felt to be inadequate so more land was purchased to the side of the existing store from Eustace Smith. The Co-operative Society had purchased 880 square yards more than was necessary. This land would not be utilized for some time.

1901 Dec - The Burradon and District Working Men's Social Club was opened. A photograph from around this time (see above) shows the Grey Horse to be a smaller building than the present one and also to be of stone construction. Another photo of the Halfway House, probably of the same date, shows it also to have been constructed in stone and be of a simpler design. It is also around this time that the Collier Lad became the Camperdown Inn, which possibly indicates a rebuilding of the pub into the spacious and grand building that still remains today. In the following decade both the Grey Horse and Halfway House would be rebuilt, enlarged and made grander. The owners of these pubs were responding to higher expectations from their customers and the competition they felt from each other.

1903 May 26 - The first coals were drawn from the new colliery at Weetslade [Lizzie Pit]. This pit was connected underground to Burradon Colliery.

1904 - The school was extended to be able to hold 750 pupils. This followed Balfour's education act of 1902 which took education into state control and funding. The extension is clearly visible as it was done in brick as opposed to the stonework of the original school of 1861. Two houses at the end of Middle Row were demolished to make way for the extension. However, two houses were added on to Burradon Terrace in compensation for this. These houses incorporated a proper staircase and upstairs windows.

1911 Sep 04 - An electric water pump was installed and started in Burradon Colliery. The water from the colliery was pumped down a gutter at the side of where the recreation ground now stands towards Burradon Terraces. The Times reported on 12th July:

"An electrification scheme is nearing completion at the Burradon Colliery, Northumberland, belonging to the Burradon and Coxlodge Coal Company (Limited), of Newcastle-upon-Tyne, in which the plant, which has been supplied by Messrs. Ernest Scott and Mountain (Limited), includes a three-throw pump, with rams 10in. in diameter and 15in. stroke, arranged to deliver either 270 or 400 gallons a minute, against a head of 900ft. A three-phase slip-ring motor, working at 2,750 volts, 40 cycles, drives the pump through two reductions of gearing. Two pinions and shafts are provided of different sizes to give the required speeds on the crankshaft. The motor drives on to the pinion shafts through a flexible coupling, the pinion shaft being run between two pedestal bearings.

There are also installed two 250-h.p. slip-ring motors, arranged on one cast-iron bedplate, with an intermediate rope pulley mounted between them. Each motor drives through a flexible coupling on to the rope pulley, which is utilized to drive a ventilating fan. The ventilators of the pit will depend on this fan, and therefore the two motors have been provided so that there may always be a spare motor to be put into commission by merely inserting the pins in the flexible coupling. Two motors, each of 100-h.p. capacity, are also used for driving compressors inbye." 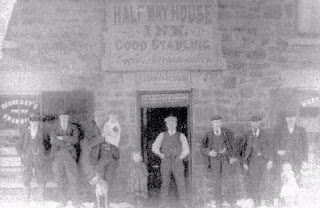 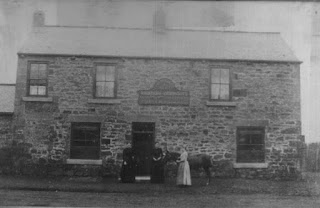 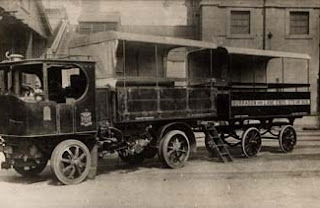 1914 Mar 02 - The first steam bus ran from the Camperdown Hotel to the tram interchange at Benton a few miles to the South. The trams ran into Newcastle. Tickets could be purchased from Harry Anderson. It was a multi-function vehicle carrying mostly passengers at weekends and goods during the week.

1915 Apr 15 - A German zeppelin, this being wartime,  flew over the SE of Northumberland including  Burradon, which caused a certain amount of panic.

1915 Nov 06 - The shopkeeper and lay preacher Alex Bolton died. A memorial in his honour was unveiled in the United Methodist Church on March 4th of the following year. This appeared in the Morpeth Herald during 1904 and refers to Lay Preacher and shop owner of Burradon Alexander Bolton. A well-known local character he owned a shop and post office on Burradon Road near the school - now a men's hairdresser. his son Joseph took over the business shortly after this date and was still being listed on trade directories in 1938. He became a business owner after being blacklisted from working in the collieries. He wasn't the only one in the Northern Coal District to follow this course.

Reservoir - Smaller than on the 1894 map to make way for railway sidings which run to the power station
Pit Row - c1820?; a smaller row than on the 1894 map indicating that it was no longer being used for dwellings, but rather store rooms for the colliery
Recreation Ground - In existence by 1894 as a football field. Now expanded
Double Row - 1872; 3 rows of 7 dwellings each; 1872 description: 17-18ft square, one room and an attic, the attics are ceiled and have a fireplace, floor of wood [in the previous colliery rows the floor was only of beaten earth], a washhouse and privy was attached to each house, a high step up to the door for dryness
Strawberry Terrace - first recording; 7 dwellings
North Row - 1872; 27 dwellings; see Double Row for description
Middle Row - 1872; 25 dwellings reduced from 27 to make way for a school extension; see Double Row for description
Mission Chapel - 1894; Church of the Good Shepherd [an Anglican chapel-of-ease]. This map indicates a building to the east of the church which was not present in 1894
Infant School - In existence by 1894; on this map the building has been enlarged from 1894
Office Row - 1860; 1861 30 dwellings; 1871 40 dwellings; for an 1872 description see Burradon Terraces except in Office Row the garret was unceiled
Colliery Manager's House - In existence by 1858; on colliery end of Office Row