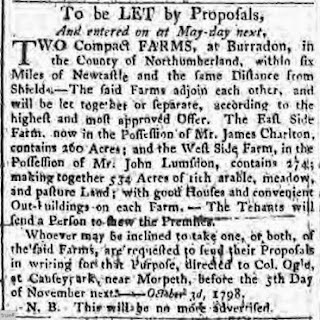 By the mid 17th century the knightly Ogle family had acquired, piecemeal, the whole of the township of Burradon. This had allowed them to consolidate their holding and convert the medieval open fields into two modern farms, the East and West farms, by way of field enclosure.

1664 Dec. - Major James Ogle died and was buried at St. Andrews, Newcastle. His lands in Burradon were inherited by his son, William. William did not appear to reside at Burradon between the period 1664-1676. The main family seat was at Causey Park a few miles to the North of Burradon. The East and West farm were leased to tenant farmers.

1664-1676 - The hearth tax returns for the period 1664-74 show that the lands were being tenanted by a yeoman farmer William Armourer, who was almost certainly living in the pele tower, which by this time must have been extended, by a farmstead having been joined on to the South and East sides, as it had five hearths. An extra door had been made on the South side of the tower, which can still be seen today. The hearth tax returns for Burradon are listed below (2s. charged on each hearth in a home worth over 20s.):

The return for 1674 is not divided into townships, only the return for the whole of Earsdon parish is shown, but no William Armourer is mentioned in this year and no dwelling in the whole of Earsdon parish is assessed at more than one hearth. Only Robert Wright is mentioned as a name continuing from 1666. Were the farms untenanted at this time? It could also simply be that the assessors were not allowed access to the pele tower. Also what is suggested from all four returns is the residents of Burradon were landless labourers who were fairly mobile, probably being hired on a yearly basis.

1676 - William Ogle, the heir of James and Jane, was said to be from Burradon when he was elected to the four and twenty (parish council) for Earsdon parish.

1678 Jul. 09 - EAST FARM Samuel, a son of Edward Rutter, is buried at Earsdon church. This is the first mention of the Rutter family in documentation relating to Burradon. Although the occupation of Edward Rutter is not stated in the Earsdon parish register entries, he does appear to be of some status and in 1693 was elected to be a churchwarden. It is probable that he was a tenant farmer at Burradon.

1685 - WEST FARM First mention of William Pace in the Earsdon parish registers. He is also likely to have been a tenant farmer in the other moiety of Burradon. He served as a churchwarden in 1687. This is the last mention of a Pace family member in the registers however.

1709 - WEST FARM The Pace farm is by this date being tenanted by John Cook, who is styled as Mr. In the three entries relating to him in the Earsdon parish registers. He is last mentioned in 1712.

1716 - WEST FARM The first entry for Robert Alder in the Earsdon parish registers. No clue as to occupation or status is given for Robert, but his long occupancy (until at least 1732) and his filling a gap in the dates between other known tenant farmers suggests that he was probably a tenant farmer himself.

1729 - EAST FARM Last mention of the Rutter family in documentation regarding Burradon.

1734 Dec. 09 - EAST FARM Mary, the wife of Edward Charlton, was buried at Earsdon. The Charlton family were to remain at Burradon until at least 1798. It would appear that up to three generations of Charltons farmed at Burradon. Until 1779 no occupation is given in the numerous entries of Charltons in the Earsdon parish registers, but after this date the occupation of farmer is given.

1738 Jan.11 - WEST FARM From this date until 1752 there are three instances where a Robert Cutler, husbandman, is mentioned.

1767 Apr. 12 - WEST FARM First of seven recordings of John Lumsden, a farmer, in the Earsdon parish registers. It can be presumed that he farmed land vacated by Robert Cutler as he runs contemporary with the Charlton family. He is last mentioned in 1785.

1798 - This advert was placed in the Newcastle Courant during 1798 by Colonel Ogle of Causey Park, near Morpeth in an effort to attract new tenants to his farms at Burradon.
"To be LET by Proposals - And entered on at May-day next, TWO compact farms, at Burradon... The said farms adjoin each other, and will be let together or separate according to the highest and approved offer. The East Side Farm, now in the possession of Mr James Charlton, contains 260 acres; and the West Side Farm, in the possession of Mr John Lumsden, contains 274; making together 534 acres of rich arable, meadow and pasture land; with good houses and convenient Out-buildings on each farm. - The tenants will send a person to shew (sic) the Premises... NB This will be no more advertised."

According to Norman McCord, in North East England: The Region's Development 1760-1960, at the end of the 18th century North East England was an important centre of agricultural development and regarded as a place where farming was superior to most parts of England. However, a large amount of the good reputation enjoyed was based around the work of the Culley brothers, who were hugely successful innovators based in the north of the county. McCord states:

...fertile soils of North Northumberland such as Millfield Plain were much more susceptible to improvement by existing techniques [than the] boulder clay of SE Northumberland.

"It must surprise many who have hitherto been led to consider the agriculture of Northumberland as a model for the rest of the kingdom, to learn that a great portion of the county, extending from near Newcastle-on-Tyne on both sides of the railway as far north as Warkworth, is as little drained and as badly farmed as any district we have yet seen in England, and that the occupiers of the small farms can only eke out a scanty subsistence by careful parsimony and by employing no labour except that of themselves and their families."


1798 - There were fourteen men aged between fifteen and sixty living at Burradon. Between them they owned four carts and eight horses, although most of these would have been the property of the two farmers. This is only three years prior to the first census where twenty-nine people in total were living at Burradon. These figures would have been expanded in recent times by the arrival of small-scale quarrying around the farmstead area. The first quarry worker mentioned in the Earsdon Parish registers appears in 1798, although in 1787 Joseph Potts of Burradon described himself as a stone cutter.

1804 Feb. 14 - The sole landowner William Ogle Wallis Ogle died and seems to have been replaced with an exact namesake. An estate map was drawn up in this year which shows the fields of Burradon township to be fully enclosed and the roads to be exactly in the same position as they are today. The map was later used (1839) by the tithe commissioners. They found in this year that 473 acres was being used as arable land, fifty as meadow and eleven acres waste. One quarry to the east of the tower was in existence.

1811 - Sir Matthew W. Ridley is recorded as the owner of Burradon Quarry. He was from a prominent North-East family who owned the town of Blyth. The stone he wrought was principally used for the construction of a glass works in that town.

1811 - The census of this year enumerates forty-eight persons living in Burradon. This figure is up from twenty-nine on the 1801 census. Expansion of quarrying may account for most of this rise, although we have no detailed information on the inhabitants occupations.