From the middle ages until the late 20th century the administration of various services etc (mostly poor relief) was carried on through the church network. Churches administered an area called a parish. the parish was further subdivided into areas called townships (named vills in earlier times).

Burradon Township was part of Earsdon Parish. The village we now know as Camperdown was in Longbenton parish but the North of the road was in Weetslade township, the South side was in Killingworth Township. The colliery was built in Burradon but for reasons yet to be fully established the owners established the colliery housing across the border in Longbenton parish. The boundaries were demarcated by streams that have since been filled in by the colliery track and main road (although a section of ancient stream can be found past the railway bridge towards Weetslade).

Weetslade had been owned by the Hazlerigge family since 13th century and the settlement was therefore called Hazlerigge. But a name was needed for the shops, pubs and housing that was springing up on the South side of the road in Killingworth Township. The four and twenty of the parish (like your modern-day councillors) decided on the name Camperdown, although we do not have the documentary evidence of this. But... "1840 Aug 06 - A baptism recorded in the register of Longbenton, St. Bartholomew gives the first recorded reference to the name Camperdown as a settlement. "William to John and Mary Cockburne of Camperdown, pitman."

The 1906 Kellys trade directory list "Hazlerigge is locally known as Camperdown" and by 1910 the name Hazlerigge has been dropped officially altogether. At around this time the boundary between Burradon and Camperdown is moved from the colliery track (ancient stream) to the Seaton Burn Wagonway rail line. 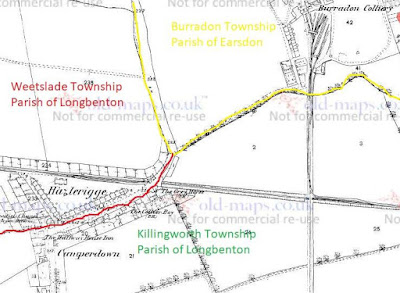 The area of Burradon township throughout the period from the early 13th century to c.1912 is enclosed within the blue line on the above maps. The boundary seems to have been demarcated by streams, no longer in existence. A small section of one of these streams can still be found just west of Camperdown, however, and the course of this and other streams show up on early maps. North West Burradon is bounded by Sandy's Letch. This leaves the Seaton Burn at Annitsford and re-joins at Seaton Delaval. The northern-most boundaries have now been lost to the modern village of Fordley.

1804 - The area of Burradon township was 535 acres 2 rods and 26 perches (the acreage seems to have remained at around this figure throughout the middle ages).


1861 - According to the census of this year Hillhead farm consisted of 175 acres.


1905-1912 - The areas would have changed dramatically around 1912 when the boundary between Burradon and Camperdown was moved to the line of the Seaton Burn waggonway. Later in the 20th century a new settlement of Fordley was built on the lands in the north of Burradon township.


Burradon was in Tynemouth Parish and the parochial chapelry of Earsdon. Camperdown was in Longbenton Parish.


1865 - Killingworth parish was formed out of Longbenton and Camperdown became part of thois new parish.


1860s - The new primitive methodist chapel (still extant as a dwelling house) was part of the Seaton Delaval methodist circuit.


1892 - Burradon was separated from Earsdon parish and added to Killingworth.

Burradon was in Wansbeck constituency, Killingworth and Weetslade in Tyneside constituency. At sometime between 1904-31 both Burradon and Camperdown became part of Wallsend constituency.

1888 - A local government board act was passed which required the setting up of urban and rural district councils. Camperdown was included in Weetslade Civil Parish which was formed out of Longbenton Civil Parish.

1899 April 01 - Camperdown became a civil parish in its own right which was the smallest unit of public administration. It was part of the Tynemouth Rural District which administered such things as implementing public health acts.