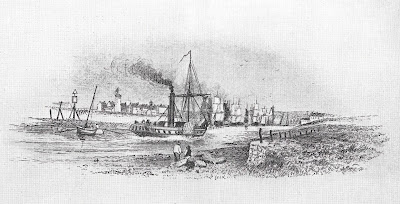 A letter sent by Taylor Winship, who was effectively the managing director of Cowpen Colliery, on 24th May 1819, mentions a steam vessel being at work in Blyth harbour. The majority of the coal from Plessey and Cowpen collieries was shipped from the harbour to ports on the East coast of England and the low countries. CE Baldwin in "The History of the Port of Blyth" explains: 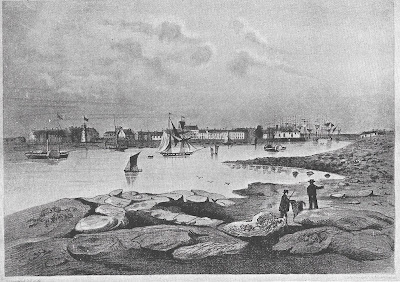 "As the coal was carried entirely in sailing vessels it was no unusual occurrence that considerable delay took place in getting them to sea when there was an unfavourable wind, and consequently the Cowpen owners tried the experiment of having a steam vessel for towing the vessels to sea. The experiment was a great success and 1st June 1819 must have been a great day in the history of the river. The following account from the "Blyth Monthly Gleaner" of that date gives a delightful account of the proceedings:
'Since our last there has been the greatest number of ships in Blyth Harbour that was ever known in the recollection of the oldest inhabtant. On the 8th ult there were 67 sail, 64 laden, two in dock and one in ballast. On account of the wind remaining sometime in the South, the laden vessels could not get to sea and several continuing to come in almost daily caused such a grand display on the above day. A dinner was liberally given by the owners of the Cowpen Colliery at Mr Bowes' to all the captains in the harbour, and the afternoon was spent in the most agreeable manner.
The owners of Cowpen Colliery, in endevouring to obv⁮iate the the inconvenience of vessels not being able to get out of Blyth in a Southerly wind resolved to make an experiment with a  steam boat belonging to Newcastle to tow ships to sea.
The boat arrived in the harbour between 7 and 8 in the morning of the 18th June 1819.
In the forenoon the Resolution captain T Hogg, coal laden, was towed as far as the outer beacon, to the great satisfaction of a number of spectators. A brig and a sloop both laden were towed to sea in the same style. The steamer then then returned to the quay, when a party of shipowners etc, went on board and spent the afternoon in great conviviality.'
A steam boat was purchased and the first sailing ships to be towed to sea were the 'Brilliant', 'G Bulmer', 'Master' and the 'Richard and Ann', Stephen Bergen, master being afterwards kept constantly in use."


In 1842 another experimental steamship was to be found on the river. The steamer 'Bedlington' was commissioned by Netherton Colliery at a cost of £4925 [about £500,000 in 2018] built by TD Marshall and Woodhouse at South Shields. It met the colliery wagonway at staiths near the mouth of the Sleekburn. It was a roll-on, roll-off vessel. No unloading of the coal wagons was necessary, a type of ferry rather than a collier boat. It was 277 tons gross and could travel at up to 7 knots on a coal consumption of eight-hundred weight per hour. The vessel was wrecked in 1846. Bedlington was followed by 'QED' , built by John Coutts of Walker. It had only a small engine and the owners were disappointed with the performance, eventually having the vessel converted to sail.

But higher powered steam vessels would soon become the norm.