From the mid 19th century maps of South East Northumberland show small reservoirs dotted around the landscape, often near collieries, to supply this industry and the dependant population with water. 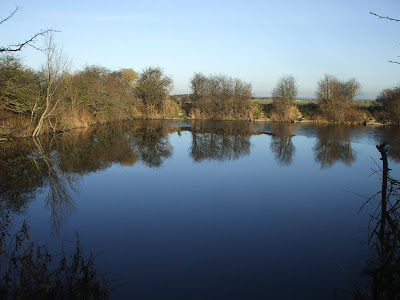 A reservoir still exists at Blyth although it no longer provides the water supply to the residents. It is now used by an angling club. It was from the 1850s, though, part of a water works. Adjoining the reservoir is the foundations of a building with rows of toilet cubicles inside. This probably dates from the 1970s when the site was used as a caravan park. The toilets were built within what were two disused cottages, presumably built  for the Water Works staff.

Wallace in his History of Blyth how the landowner constructed a water works following an act of Parliament in 1847 (Water Works Clauses Act).

"1854  Oct., extensive works for the purpose of giving the town a pure and plentiful supply of water, undertaken by Sir Matt. W. Ridley, were brought into successful operation, superseding the bringing of water to the town by carts, and the yet more primitive mode of females carrying water on their heads in skeels from the " far pit," — the almost universal practice 50 years ago. Nov., a meeting of rate-payers agreed to light the streets with gas."


Leases on dwellings often specify that water had to be obtained from Ridley's Water Works as part of the agreement.

By the late 19th century the piecemeal system of local government, sanitary authorities - outside of Government control and administered by volunteers -  and utility provision was no longer adequate. District Councils had come into existence by 1894 and sought to improve provision as this article illustrates:


"The South Blyth Council is engaged in consideration of one or two large undertakings at the present time. The general  sanitation of the district has been discussed at some length since the Council's formation; the question in regard to the main roads has been taken up; and the Council is advancing in the direction of making a new road to Newsham. These are all big items. But the Council now shows a disposition - as those who read the report at the last monthly meeting would perceive - to engage in a more important undertaking perhaps than any it has tackled, namely the purchase of the Water Works from which the South Blyth district derives its supply. The resolution was passed - that a committee make full inquiries into the matter - does not of course commit the Council to any definite line of policy; indeed it may be said that the motion was nothing but a formal one. Still the probability is that the idea will naturally develop, and the result will be that the South Blyth water supply will be in the hands of the local authority. There will of course be two sides to the question as to the town acquiring control of the water supply; but there can be no doubt that the advantage arising from such a proceeding is an obvious one - if possession can be obtained on fairly easy terms and it can be worked at a reasonable profit.


Unquestionably there is no more important matter for any local authority than the means of supplying the district under its charge with an adequate supply of pure water. It is the essential part of their work, for although a district may go without artificial light for a pretty lengthy period - we have heard of places being in this predicament - it cannot do without water. The full importance of the matter is recognised by the South Blyth, the Cowpen and the Bedlington Urban District councils. The Cowpen councillors have discussed at some length the water question - it has always been a serious one with them - and on Thursday week they had an interview with an engineer in reference to the laying of of the proposed line of pipes from Healey Wood to Bebside. The details of the extensions were considerably elucidated by the interview, and further explanations will given later when the Council and the engineer will meet together at the Water Works. The Bedlington council is evidently not troubled by the apprehension of its water supply running short just at the present time, for negotiations are being made to supply the NER Company with twenty million gallons for their works at North Blyth."


By the time of the 1961 Ordnance Survey mapping the Water Works was no longer in use. The 1978 map shows a camp site.


An interesting case held at Tynemouth Petty Sessions, in the development of water supply, was reported in the Morpeth  Herald 5th April 1884. The local sanitary authority were suing seven pitmen from Burradon Colliery for non-payment of rates.

The pitmen had previously agitated for a water supply to be brought to Burradon instead of relying on the colliery's supply. The reasons for this is not stated. The pitmen were found not to be liable for payment as the Water Works Clauses Act of 1847 stated that occupiers were not the ratepayers. The pitmen were tenants of the Colliery.