Just to the South of Rothbury is a hillfort on a ridge of high land. The views over Rothbury and the Cheviot Hill are incredible. And as a prehistoric monument this is a real gem and easily accessible, a car park being sited at the foot of the hill. In fact, among all the the prehistoric monuments in the National Park it is probably the best and a first port of call. It is not the largest however. This distinction goes to Yeavering Bell, near Wooler, which has over 130 dwelling huts recorded within the interior. There are some others of note listed on the National Park website in the Breamish Valley near Ingram and the Clennel Valley near Alwinton.


Not far from Lordenshaws hillfort are excellent examples of cup-and-ring rock art and burial cairns from the prehistoric period. But are all these features connected and what is a hillfort?

Lordenshaws is a circular structure with an outermost defensive ditch about 140m in diameter. When the fort was in use the ditch was up to 2.5m deep and 9m wide.

There is also an inner ditch which may be from an earlier period in the lifespan of the fort and there is some evidence of ramparts between the two. There are two entrance ways, one to the east side and another to the west, which simply cut through these ditches on a straight line. They are flanked by large boulders. 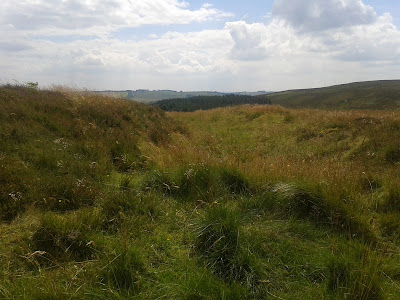 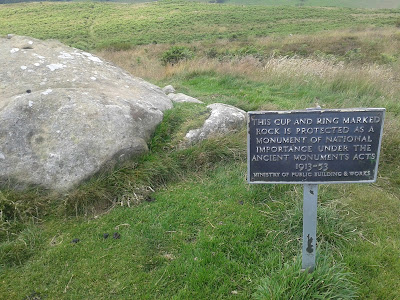 The inhabitable area on the inside of the fort is roughly 70m in diameter. One feature is clearly identifiable as a dwelling. It was a roundhouse made of stone, the walls being 1m high. The roof would have been constructed from turf or thatch. The floor was sunk into the ground, which is not completely typical for this period.

Other sunken features are also to be found within the fort, but they are considered too small to be huts. There has not been a huge amount of archaeological work done on this site, so perhaps in the future the secrets of these features may be unlocked.

Hill forts belong to the iron age period which is roughly from 600BC to around AD100 when the Romans inhabited Britain. The main dwelling of the Iron Age continued to be the roundhouse which had persisted throughout the earlier Neolithic and Bronze Age periods. However, what was different in the Iron Age was that the dwellings were being grouped together and enclosed behind palisades and defensive ditches. The religious and ritual structures of the previous periods, such as henge monuments and cup-and-ring marked rocks, were no longer constructed. The elaborate funereal practices were also abandoned. These included placing cremations in stone-lined cists and burial in long barrows or cairns. Funerals seem to have become much simpler in the Iron Age. Archaeologists know much less about death rituals than from previous times.

The presence of cup-and-ring marked rocks and cairns indicates that Lordenshaws had a use and significance before the hillfort was constructed.

The precise function of the hillfort is not known. But pressures on land were increasing and with it the insecurity of communities. Hillforts became numerous throughout Northumberland, and indeed Britain. Northumberland has the highest recorded concentration of hillforts of any county of Britain. However, it has been suggested they were built for powerful chiefs and they were as much as a status symbol as they were functional, something like a medieval castle. They also had a practical purpose of protecting stored grain or the sheep that were farmed on the hills.

The climate was getting increasingly warmer and the growing of crops was possible on higher ground than previously. But lowland settlements were also numerous and becoming increasingly more defensible. Burradon in South East Northumberland was one such example and the site was excavated in the 1960s.

In the mid-1960s aerial photographs were taken of Burradon and Camperdown. Crop marks indicated three sites, or former settlements, of archaeological interest. The first was in a field immediately to the west of Front Street, Burradon. (The housing estate of Means Drive, Shillaw Place and Attlee Close now stands here.) The settlement was rectangular in shape, with slightly rounded corners. The sides were approximately two hundred feet long, with an entrance facing east. HER 308

The second site was about two hundred yards south of the first. This was a single ditch enclosure, the date of which is uncertain. Only part of the north and west sides were showing, the remainder having been built over. HER 309

The third site is located about one hundred and seventy yards west of the abattoir - which was the former site of Burradon Terrace on the farm track. The previous two sites had been covered by a housing development, so when it was discovered, in September 1968, that this third site was threatened by the removal of clay for a major new road archaeologists were eager to excavate. Permission was obtained from the Ministry of Public Building and Works and also from Mr. William Younger the farmer of the land, whom it was acknowledged was most helpful. The work was carried out under the directorship of George Jobey from Newcastle University.

Pottery found suggested that an unenclosed site could have been in existence here as early as the fifth or sixth century BC.  Excavation of the next more recent layer discovered a traditional early Iron-Age settlement. This site was enclosed by a ditch 10m wide and was roughly square in shape with slightly bowed sides. It measured about three hundred feet in length and had an entrance to the east. Small quantities of Iron-Age pottery were found and evidence of eight to eleven round timber-built huts, although probably only three were in use at any one time. HER 305

Superimposed on this settlement was another enclosure one hundred and twenty-five feet square with one round timber built house about forty feet in diameter. The enclosure ditch was about 15ft wide and about 8ft deep with an internal bank This was thought to be occupied during the second century AD Both entrances to these two settlements were aligned on the east side. Romano-British pottery was found, although only nine sherds of Roman pottery; this would seem to indicate trade with the Romans. The pottery was of local manufacture. Fragmentary remains of dogs, cattle, sheep and pigs; as well as Oak, Ash and Alder trees were discovered. Coal was found in the hearths of the second century settlement. It was thought this coal probably came from an outcrop near the sea and was not sea-coal.

This has been a brief summary but these sites listed give a more detailed guide to prehistoric Northumberland including reconstruction and virtual reality 3D models of sites:

Time Team's Timechester book also is a good introduction to the period
Posted by Alan Fryer at 14:13