The National Park in Northumberland covers a vast area to the north-west of the county between the River Coquet and the Cheviot hills. It is visited and used by thousands each year. The national park authority has a wonderful website http://www.northumberlandnationalpark.org.uk/ listing all sorts of walks and heritage sites. One such site was the Drake Stone. 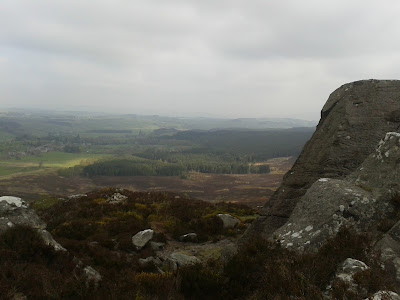 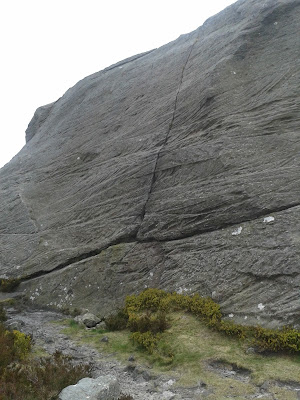 The Drake Stone is near Harbottle in Coquetdale ten miles south of the Scottish Border and about seven miles west of Rothbury. The stone has a legend of supernatural healing powers and having been a meeting place of the druids in prehistoric times.

What more could I find about its place in the prehistoric environment and if there was any truth in the legends? I found these comments and quotes on http://www.themodernantiquarian.com/site/7943/drake_stone.html webpage:

"...the Drake Stone is reported to have the ability to cure sick children who are passed over it. Tomlinson (1888) even goes so far as to comment that although he has seen no direct evidence of this, ""Harbottle is an exceptionally healthy place ........and mortality among children almost unknown". It's possible that Tomlinson took his information from a slightly earlier source, Murray's Northumberland: handbook to Durham and Northumberland (part II London 1873, p 324.) where it is stated that:
"Half a mile from Harbottle is the Drake Stone, a very interesting relic, being the Draag stone of the druids. By a small tarn near it is a druidical rock basin. The custom which still prevails in Harbottle, of passing sick children over the drake stone may be a relic of druidical times, when they were probably passed through the fire on the same spot."

"Regarding any possible 'ritual' significance in prehistory, the 19thC reference to druids is obviously an artefact of the predilections of the Victorian craze for all things druidic. But then there's the tentative idea that the stone's proximity to Harbottle Lough may have afforded it significance to anyone to whom lakes were somehow connected to the underworld. It would also have been one heck of a platform for any priestly character who was nimble enough to climb it."

"Regarding the significance of the Drake Stone itself in prehistory, in conjunction with the local folklore about healing children, it seems to me to have been a very likely spot for use throughout the ages. The outcrops around the erratic form natural shelters, making it a high quality vantage point and suitable for Mesolithic wanderers keeping an eye out for animals drinking on the edges of the gravel terraces of the river Coquet. It's placed on the putative edge of two Bronze Age territories, as is evidenced by the cross dyke a mile or so to the east, for whatever that implies. Equally, it could be just as useful as an Iron Age lookout, having a good view of a major route from the hills to the sea..."


I made a visit and it came as a surprise after having studied maps of the area that the path to the Drake Stone was a bit longer and steeper as I had imagined. The path was also quite narrow near the summit and was more suited to younger legs than mine.

But reaching the top the views were amazing. I passed what appeared to be a cairn near to the summit. Looking back to the view of the ruins of Harbottle Castle gave an idea of how prominent a monument it is.

The Drake Stone itself is a huge sandstone boulder. Standing alongside I estimate it is about 25-30 feet high. I could only wonder how our ancestors managed to stand on the top without the aid of modern-day climbing ropes, but it certainly has a commanding position. Harbottle Lake, mentioned in the preceding quotations and noteworthy because of the prehistoric rituals of placing items in lakes, and the glacial valley it sits in, can clearly be seen on the south-west side. On the far ridge is what looks to be a ruinous structure but OS mapping shows this to be natural sandstone glacial deposits.

So... when I was up there did I lay my hands on the stone, pretend to offer a sacrifice to the gods and mutter an incantation? Course I did! 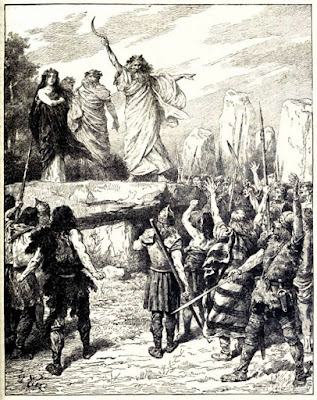 This is from the Wikipedia entry about druids:

"A druid  was a member of the high-ranking professional class in ancient Celtic cultures. While perhaps best remembered as religious leaders, they were also legal authorities, adjudicators, lorekeepers, medical professionals and political advisers. While the druids are reported to have been literate, they are believed to have been prevented by doctrine from recording their knowledge in written form, thus they left no written accounts of themselves. They are however attested in some detail by their contemporaries from other cultures, such as the Romans.

The earliest known references to the druids date to the fourth century BCE and the oldest detailed description comes from Julius Caesar (50s BCE)."

Greek and Roman writers frequently made reference to the druids as practitioners of human sacrifice. According to Caesar, those who had been found guilty of theft or other criminal offences were considered preferable for use as sacrificial victims, but when criminals were in short supply, innocents would be acceptable. A form of sacrifice recorded by Caesar was the burning alive of victims in a large wooden effigy, now often known as a wicker man."

The archaeologist Francis Pryor, a specialist in prehistoric Britain, has made plausible claims in a number of BBC documentaries that religious practice from 2500BC to the Roman period in AD43 was connected to a belief in the afterlife and an underworld where the souls of dead ancestors departed to, hence the objects placed in water as a sacrifice to this underworld. Burial monuments were made to these dead ancestors. They also acted as a mark on the landscape, a claim to the land, which was increasingly important as man settled as farmers instead of primarily hunter gathering. Circular henge monuments were constructed around these burials and became quite elaborate, sacred places, often being used for millennia and having common ownership. The importance of the circle symbol is not known to us but would have been as understood to the prehistoric Britains as the symbol of the cross is to us in a Christian country.