While wandering in Horton, Blyth Churchyard a little while ago I came across this grand monument to Thomas Knight.


Of course, I am familiar with the Thomas Knight Care Home which stands on Beaconsfield Street behind the library. I was also aware that the care home stands on the site of the now demolished Thomas Knight Memorial hospital. So who was Thomas Knight and why was a hospital founded in his honour?

"OFFICIAL OPENING OF THE KNIGHT MEMORIAL HOSPITAL AT BLYTH: An event which has occupied the attention of the public of Blyth for some years now was brought to a successful termination on Wednesday afternoon in the presence of numerous company of ladies and gentlemen. The weather was most adverse for the occasion and added its disagreeableness by a continuous rain. By the way of information we beg to remind our readers that the hospital has been erected in memory of the late Mr Thomas Knight, a shipowner, who for many years resided at Crofton, Blyth. The desceased gentleman rose from the ranks and in time became one of the leading and wealthiest shipowners of the port. During many years he was a most generous contributor to all charitable movements initiated in that district, and after his death and that of his wife it was found that a large amount of money had been left for the founding of a hospital such as the growing importance of the Blyth and district required. The hospital is a substantial building, situated at the rear of the new mechanic's institute, and has been fitted up in a manner calculated  to serve the purpose to which it has been devoted. At one 'o' clock the Hon Lady Ridley, Sir Matthew White Ridley, Dr G Ward, Revs Greenwell and Maddison (vicars) and the Rev P Pearce, and a number of ladies and gentlemen assembled in the Blyth Local Board Room, Mechanic's Institute and a procession was formed to the main entrance of the hospital which was gaily decorated with bunting etc. There was a large company present, principally out of curiosity..."

The Newcastle Daily Chronicle of Wednesday, 28 December, 1887 reported: "At the door of the new building Dr. Gilbert Ward (who has taken immense interest in the undertaking) will present the key to Lady Ridley and ask her to open the hospital. After Lady Ridley has declared it open a portion of scripture will be read by the Rev. Peter Peace and prayers will be offered by the Rev. W. Greenwell, Vicar of Horton. An inspection of the interior will follow and there will be a luncheon in the Lecture Hall of the Mechanics Institute. Up to the present the hospital requirements of Blyth have been met by a small cottage hospital close to Blyth links."

Thomas Knight's widow had left an endowment of £6000 [about £712,000 in 2016]. However, it was felt that this was best used as revenue funding for the hospital (the interest earned on this endowment was still being used by the hospital into the 1980s). The capital costs of building the structure were raised by public subscription, although there must have been some discussion around Lady Ridley herself  providing the funding. The land on which to build the hospital was donated by Lord Ridley after discussions with Dr Ward. But there was some praise on the day as having a public subscription being the proper course to have taken, presumably as the public had made a stake holding in the building, with the ladies of various churches in the district having raised £251 at a bazaar, they would value it more. The vast cost of the building estimated at £2500 [roughly £297,000 today] was met by coal owners, the Duke of Northumberland and Lord Hastings due to the depressed state of trade in Blyth at the time.

"Thomas Knight had started life as a seaman in 1818. By thrift and hard work he saved enough money to buy his own keel to work for the Sleekburn Coal Company. He then bought a schooner of good sailing qualities and invested in other ships, retiring as steam ships began to supersede sailing vessels." (James Scott, Tyne and Tweed, 1983)

The hospital was described in the 1914 Kelly's Trade Directory for Northumberland: "...the building is of white brick with stone dressings, and comprises on the upper floor two wards, each containing four beds; on the ground floor is a large committee room, a waiting room, dispensary, two consulting rooms and a kitchen and offices. During 1913 there were 82 in-patients and 620 out-patients. In 1896 a marble bust of Dr. Gilbert Ward was placed in the entrance hall, the doctor having died in 1894."

Dr Gilbert Ward was mentioned in the newspaper extracts as the official in charge of the proceedings. It is the history and legacy of Dr Gilbert Ward which is a large factor in the provision of health services in Blyth.

The Royal College of Surgeons have this short biography of Dr Ward on their website: "[General Surgeon] Born at Newcastle [1805] and served his apprenticeship under Dr Trotter, of North Shields. He practised throughout life at Blyth. For fifty-five years he held the position of Registrar of Births, Marriages and Deaths in Blyth; for over fifty years every entry was made by his own hand. He was also Medical Officer of the Tynemouth Union; Medical Referee to the Star, Church of England, and Crown Assurance Societies; Surgeon to the Coastguard and to the Royal Naval Volunteers; Public Vaccinator and Certifying Factory Surgeon. He died at Blyth on May 17th, 1894."

Ward first came to Blyth during the cholera epidemic of 1832 which Wallace in his 1869 "History of Blyth" mentions: "In the autumn of 1832 cholera morbus reached Blyth, it's first victim being Peggy Lamb, a widow living in Church Street. A day or two later Andrew Steel, a roper, died and before the epidemic subsided eighty of Blyth's then population of 3000 had succumbed to the mysterious scourge." Cholera re-visited  Blyth on a further two occasions during the next twenty years. Ward, who also had responsibilities as the French Vice-consul had  difficulties isolating infectious patients, especially those that arrived at the port from various ships with diseases such as typhus. Lord Ridley heard of these difficulties and provided a cottage, rent free, to Dr Ward to be used as a hospital. The cottage was at the junction of what is now Ridley Avenue and Park View. As well as isolating infectious patients it also provided other hospital services. These services were transferred to the new Thomas Knight Hospital when it came into existence. 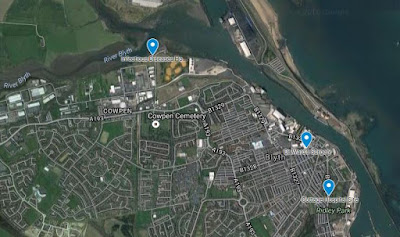 Dr Ward had a practice in Bridge Street, Blyth in a now demolished house on what is now the site of a modern bus depot. His son, Henry, joined him in this practice from 1864 until his untimely death in 1891. Marine Medical Group, which operates a practice in Blyth, can trace their roots to Dr Gilbert Ward's surgery. The same site on Bridge Street was used by Dr Newstead, followed by Dr Urquart, until 1956. There was then a succession of Doctors operating from Waterloo Road and then Stanley Street before ending up at the present site in the community hospital where the bust to Dr Gilbert Ward now occupies the main entrance. He had become well connected with the well-to-do in the town and hosted a member of the Royal family on one occasion. Scott (1983) writes: "On the day of Dr. Gilbert Ward's funeral police were out to control the crowds, many shops and places of business closed, blinds were drawn at the Hospital, the Mechanics Institute and the banks. Among the wreaths was one from the French Government." A window in St Cuthbert's Church, Blyth, entitled "The Four Works of Mercy" was also placed as a memorial to Dr Ward.

In 1893 an act of Parliament was passed (The Isolation Hospitals Act) which enabled local authorities to build hospitals for isolating patients with infectious diseases. Stiff penalties had been introduced by act of Parliament in 1866 for anyone carrying infectious diseases who endangered the public. A hospital was built for this purpose beside the river in Cowpen. Kelly's Directory (1913) describes it: "The Infectious Diseases Hospital, erected by the Blyth Port Sanitary Authority, at a cost of £3000, and opened in Aug. 1893, stands on the west bank of the river Blyth, near Old Factory Point, opposite Cowpen Cemetery, and is a corrugated iron building on a brick foundation; it comprises east, west and middle wards and a residential part containing six rooms; provision is made for 20 beds."

The cottage hospital was not needed after this date and Ridley Park was developed soon after near to this site.