The workmen of Blyth Shipyard were on annual leave on the 3rd August 1966 when the editor of the Blyth News was invited to go along to the yard to be briefed on a news item. With all the 1400 workforce away on their holidays what he was actually told was momentous. The shipyard was to close.

Of the 245,000 shares in the Blyth Dock and Shipbuilding Company 242,000 were owned by Moller Trust Ltd of Hong Kong. And the formal redundancy notices the men received soon after, while on annual leave, were postmarked Hong Kong.


The loss of heavy industry at that time, which also included some of the town’s coal mines, has often been cited as the start of a demise in Blyth’s fortunes. But were the closures inevitable or was this the product of a foreign management indifferent to the plight of the town?

Eddie Milne was the town’s MP from 1960 to 1974. He spoke on the subject at a House of Commons debate on the 20th Oct 1966 with the Labour Secretary of State for the Board of Trade, Roy Mason:

“The first Ark Royal was built at Blyth, but it is with the present that we are mainly concerned tonight. In the first week in August of this year, the yard was on annual holiday and the editor of the local paper, the Blyth News, on 3rd August, was telephoned and asked to go along to the yard for what was described as an item of news. A receiver had moved in that morning and taken over the running of the yard. Needless to say the town was stunned. Workers on holiday received the news from newspaper reports, and many returned from their holidays to receive the news in envelopes marked Hong Kong. 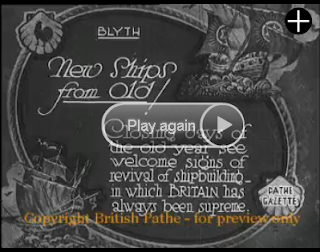 There is not the time to describe the feeling of desolation that is experienced at a time like this. As anybody in the House will appreciate, it is a matter of great sadness to watch a great industry die. The method of announcing the closure was criminal. No other word could fit the act. Men who had given a lifetime of service to the Blyth Company, in good times and bad, were entitled to treatment better than this.”


Milne accepted that the shipyard was “on a razor’s edge for years” financially. A fleet of ships had recently had their value written down by half and Lloyds Bank had recently loaned the company £539,000. But he asked that the interests of this company be examined by the Board of Trade. The creditors to the Blyth Dock and Shipbuilding Company, he said, were actually companies owned by Moller Ltd. A stormy creditors meeting in September had been chaired by Mr Tucker who had several financial interests in Moller companies. He had savagely criticized the management and workforce despite having only visited the yard on one occasion.

Milne also spoke of the quality of innovative work the yard was producing, diversifying into industrialised house building, factory structures and bridges. The Government had been stressing the further need for shipping to be built. There were mechanisms available to support the industry, for example the new Local Employment Act. He was stating that he thought the Secretary of State should intervene.

“I assure hon. Members, and my hon. Friend the Member for Blyth in particular, that the Government are not indifferent to the situation created by the closure of the shipyard in Blyth. We appreciate the worry and distress this closure has brought to those employed in the yard and to their families and the importance of ensuring that there should be alternative employment for those put out of work by the closure.

However, I cannot accept the simple proposition that the shipyard should be kept open at all costs. The company appears to have failed because, like many other firms in the industry, it had to take orders at fixed prices at a time when costs, including the cost of labour, were rising. Ships constructed have proved to be unprofitable and the yard had for some time been operating at a loss.

The experience of this yard is not unique in the industry. It was this and similar problems which led us to set up the Geddes Committee.


The site is today known as Wimbourne Quay. Shipbuilding had begun on this site in 1811 and various firms owned the yard down the decades. It became the Blyth Shipbuilding and Dock Company Ltd on 2nd March 1883. By 1900 it had taken over the Blyth Dry Dock Company and was able to carry out work on the largest of shipping, including the Ark Royal in 1914. In 1947 the yard was purchased by Mollers (Hong Kong) Ltd. It had four berths and five dry docks.

An eyewitness to the final days of the yard has written about his experiences on bedlington.co.uk website. It is quite a humorous and personal piece. It is worth reading in full. He goes under the handle of Eggy1948. He started the shipyard at age 16 and finished in May 1966 at the same age. He wasn’t hopeful for the yard’s future. There was obviously a feeling among the men that all was not well. He writes:

“No wonder the Japanese could build ships cheaper than us. They did not have to paint the whole town whatever colour the latest ship was being done in. Almost every house in Blyth had a door/shed the same colour as the latest ship… The Japanese blacksmiths did not have to make wrought iron gates for the foreman’s driveways or basketball hoops and fittings for every gable end in Blyth… All charged to the cost of the ship.”


Professor Norman McCord reflected on the findings of the 1992 Royal Commission in the book the “Northern Counties from AD 1000” when he wrote:

“At the beginning of the twentieth century, British shipyards had built 55 per cent of the world’s new tonnage; in 1960 the figure was only 15 per cent and continued to drop. Northern yards did not even hold their share of the shrunken British total, despite some success stories… Shipbuilding expansion overseas would in any event have posed problems for British yards; the catastrophic scale of decline reflected failures by both management and labour.”