Plessey Road now occupies the course of an old wagonway which brought coals six miles from inland collieries to the quay. The collieries at Plessey were opened in 1663 to take advantage of a rich seam of coal that outcrops at this location. The pits were shallow as the technology was not yet developed to ventilate and pump water from deep and extensive mines. There was eventually eighteen of these shallow pits in the area. The horse-drawn wooden wagonway was opened in 1709 and closed in 1813 when the pits had been exhausted. The course of the wagonway influenced the irregular development of streets in Blyth as the 19th century progressed.

The Ordnance Survey mapping from the late 1850 shows what is now called Plessey Road to be Market Street. Writing in 1862 John Wallace states: "The town in 1800 was chiefly on the south side of the Wagon Hill, now Market Street." By the time of the second edition Ordnance Survey (c1897) mapping the market had been established at its present site on the developing area around Waterloo Street.

From the late 17th and early 18th centuries breweries have been in existence at these sites. They supplied drink to the local population and ship's crews using the harbour. A lease from 1725 shows the brewing to be a small-scale enterprise. However later in the century a new brewery was built and a lease of 1798 mentions twenty-three public houses tied to the brewery for the purchase of beer, twelve of them in Blyth. Wartime restrictions forced the brewery's closure in 1916 and the building was partly demolished. Often leases on the Ridley properties in Blyth contained a clause which stated that if a house became licensed as a public house the beer had to be purchased from Ridley's brewery. Of course, Ridley Street in the heart of the quayside are is named after this family who are now peers of the realm with a seat at nearby Blagdon Hall. The present Lord Ridley is an influential author and newspaper columnist. 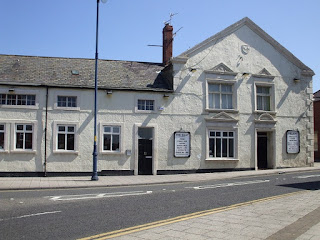 Reputedly the strongest man in England during the latter 18th and early 19th centuries, Willie's feats of strength are the stuff of legend, even today. He was a blacksmith and the sites and monument records list this place as the site of his workshop, although with little documentary evidence to support the claim. However, the 1st edition OS mapping from the 1850s does show a blacksmiths workshop to be in existence here.

This was the site of a public house which was shown to be in existence on a map from as far back as 1813. It was still there on the mapping of 1969, although photos show it to be a modernish building. It must have been rebuilt at some stage. It was in the early and mid 19th century known as the Brown Cow. In the 1827 trade directory John Northover is the proprietor and in 1854 Mary Moffat. Wallace in his "History of Blyth" (1862) mentions that the Black Bull, on nearby Sussex Street was "the great house of retort for Lynn captains". Lynn, a seaport, on the Norfolk coast was the major trading-partner destination with the port of Blyth.

These were low buildings 400 yards long and six yards wide where ropes for shipping was made. They were known as rope walks from the walking to-and-fro of the workers in twisting the fibres together in making the rope. They were sighted on what is now Park View and Ridley Avenue. The earliest recording is from 1762. The buildings were both still in existence on the 1897 OS mapping although by then marked as disused.

It was built in the latter part of the 19th century. It was one of many built around the coast at this time, but this is now a rare, fairly-intact survival. It ceased to function in 1959. It was built by the Volunteer Life Brigade. The lower floor was a storage space for a cart, rockets and various other items of equipment needed. The upper floor acted as a look out and facilities for the volunteers. There was originally an exterior stone stair to the first floor. The function was to save lives from shipwrecks close to shore by means of rocket apparatus and breeches buoy. 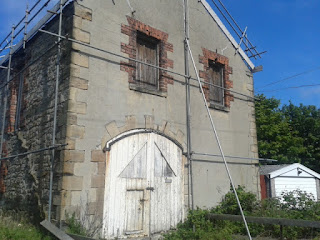 Custom Officers, who collect taxes on goods entering and leaving the port, have been in place at Blyth since at least 1673. The records of custom officers date back to 1723, a time when smuggling was rife and much documented in some of the later histories, but they were not necessarily working out of a permanent building. This neo-classical building dates from 1890, although it is now a care home with seven beds. It replaced a custom house only a few steps away on what is now the offices of Blyth Workspace. This was built in the late 18th century according to the sites and monuments database. A trade directory of 1827 gives this description: "The Custom House at this place is under the control of the Establishment at Newcastle, and is superintended by the following officers, viz. Mr. Wm. Coppin, principal coast officer ; Mr. Michael Martin, tide surveyor and two boatmen. Upwards of 1,000 vessels are cleared annually at this port, or creek, and about 14 keels, and two steam boats are constantly employed in the river." 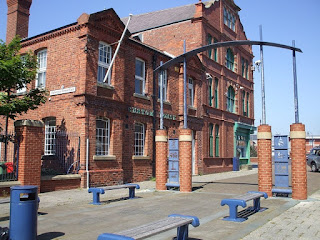 A building from the turn of the century it was "designed to impress" and is of some importance due to the preserved shop frontage. Ship's chandlers sold all manner of supplies to shipping and were an important part of the working life of a port. An 1855 directory lists three different proprietors of chandlers in the quayside area. 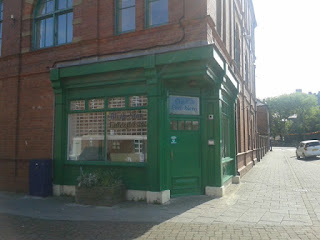 A maritime pilot is a mariner who manoeuvres shipping through dangerous stretches of water. In this case the undeveloped river entrance. 1855 Directory: "The Pilot Office is situated at the Ferry Boat Landing, Robert Oliver, master. Ten persons are listed as pilots in this directory. Pilots are frequently mentioned in the records from 18th century onwards. There are also many old graves in the local churchyard with monuments listing the occupants as pilots. 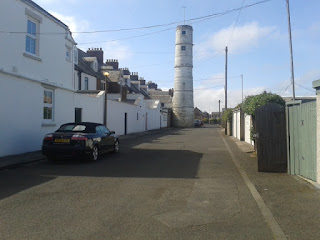 Salt manufacture, from evaporating sea water in large pans, was the first and largest industry in Blyth from medieval times. The industry became heavily taxed during the 18th and early 19th century and went into sharp decline. There had been eight salt pans at various places along both the North and South banks of the river. By 1876 the industry was extinct. The early pans were made of lead and quite small (2 feet diameter and 3 inched deep). The size eventually grew with lead being replaced by iron. Four tons of iron were recovered from a pan broken up in 1744. This particular salt manufactory was still in existence on the OS mapping of the 1850s among the now busy and bustling quayside.

The middle section of this terrace is from the late 18th century. Number 11 was converted into a bath house in the 19th century and still contains the porch with the lettering "BATHS". Clare Hickman on buildingconservation.com writes:"In 18th-century Britain the health craze of the day resulted in the creation of plunge pools and cold baths in houses and gardens across the land. These containers filled with cold water could be located within the main house or within a purpose-built structure set in the landscape, such as a grotto." These grand houses, in brick, were home to some of the most prominent of Blyth residents including many shipowners and John Carr owner of Cowpen Colliery and many other pits. 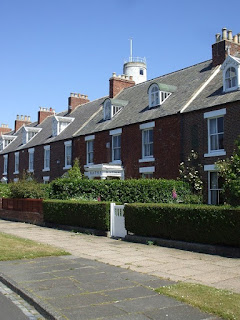 A street name on the 19th century mapping. A first though may be that this was named from the place of a port of a trading partner of Blyth, but historians believe it is a shortened version of "wapentake" - a danish meeting place - and this site could be an ancient settlement.

Built in 1925 on the site of a Church of England chapel-of-ease to the main parish church at Earsdon, several miles to the South. This was built in 1751 by the landowners, the Ridley family, to serve the ever increasing population. Nothing remains of this old church except the keystone that is visible with the date 1751 was from the entrance to the original church. "A chalice, first used in the old church in 1754, is still on exhibition in the new church", according to St Cuthbert's website. 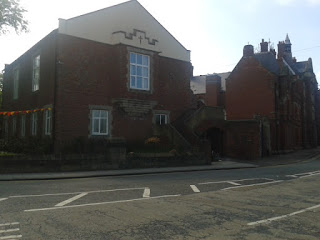 A yard was shown at this site on the early 19th century mapping. It was on of several shipbuilding sites on the Blyth. Shipbuilding began on the river in the mid 18th century and continued until 1966 on both a large and small scale. This was a relatively small yard. The main site was just slightly upstream past the River Cafe.

The burial place of many prominent Blyth residents and home to some ornate and listed grave stones. Unfortunately there is much weathering on many of the stones. Look out for "William Watts of South Blyth Pilot taken to the Mercy of God being drowned (with three other Pilots) while employed in the duty of his Calling on the 14th day of January 1805 he left a widow & five children to bewail his loss Weep for yourselves, for me lament no more I'm safely landed on a peaceful shore My Home's in Him whose word proclaimeth this - I am the Way to everlasting Bliss". There were many tragedies on 14th January in the first two decades of 19th century and it became known as Blyth's unluckiest day, with boats being kept on shore. for a long time afterwards.

The building of 1896, on Bridge Street, by county architect John Cresswell, recently came to the end of its life as a police station. Described by Pevsner, in his monumental "Buildings of England" series in the 1950s, as probably the best building in Blyth. It is in red brick, Italianate Gothic style with lots of carved detail and marble columns. It incorporates a magistrates’ court and Sergeant's flat which were decommissioned some time ago. 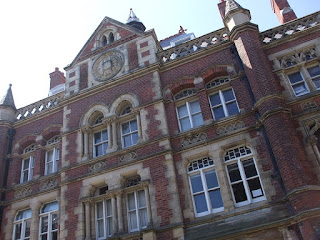 This was built in 1913. The boardroom is decorated with wood panelling and Dutch tiles from the SS Walmer Castle which was broken up at Blyth in 1932. The Harbour Commission had come into existence in 1882. The previous Harbour and Dock Company were not able to raise the necessary funding to expand and develop the port, which was much needed to cope with the increasing trade. The Harbour Commission as a public body had access to a wider range of public capital and set about a programme of developing the port to what it is today.