Happening right now is a project, based on Blyth’s quayside, to restore a tall ship. This will be adopted as Blyth’s very own vessel. The venture aims to provide skills and a confidence-boosting initiative to young people who would probably otherwise be unemployed and without any training opportunities. It is using Blyth’s heritage to move into the future by recreating the exploits of one of Blyth’s former pioneers, Capt William Smith, by sailing to Antarctica.

You will have no doubt read much about the project, the recent Royal visit and may even have welcomed the boat to her new home at Blyth Port. If not this video captured the event: 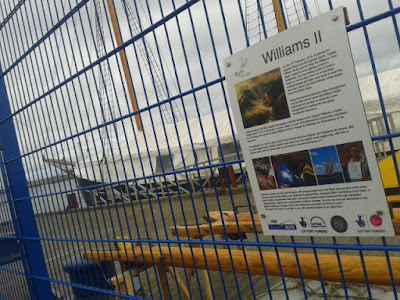 John Wallace in his "History of Blyth", which was written within living memory of Capt William Smith in 1862, gives a good account of this adventure. He also gives an even more exciting account of the fate of Smith's Daughter and son-in-law at the hands of African natives. This is it:

"Mr. William Smith had his name brought prominently before the public in 1820, by some naval officers on the coasts of South America reporting home that an Antarctic continent, or long series of Islands, of whose existence an ancient rumour is reported, had been discovered by Captain William Smith, of the brig, William, of Blyth.

It had always been the custom for our trading vessels to keep as near as possible to Cape Horn, in passing into the Pacific. Mr. Smith, in a voyage from Monte Video to Valparaiso, rounded the Horn in a high southern latitude, and fell in with a line of coast, which he followed for two or three hundred miles, and which he named New South Shetland; he landed and took possession of it in the name of His Britannic Majesty. The extent of this group is from 54 to 65 west longitude, and from 61 to 64 south latitude. It consists of numerous islands without a vestige of vegetation, except a species of moss, and in a few solitary spots something resembling grass. The interior is mountainous, and covered with eternal snow. A species of coal was found which burnt well. He passed large bays, which abounded in spermaceti whales ; seals were extremely plentiful, and shrimps and penguins were numerous beyond description. The large islands are five in number. Some of the harbours are very good ; vessels in them being land-locked. After landing at Valparaiso, he made his discovery known to the British naval authorities there, and a party of naval officers accompanied him in his vessel to verify and certify to his discovery, and New South Shetland has since appeared on the maps of the world.

Mr. Smith was master of the Lady Ridley of Blyth, in 1801; he continued in her for some years, and in 1815 became part owner of the William; in this vessel he proceeded to South America. The Spanish possessions in South America had just thrown off the yoke of the mother country, and the ports of those extensive countries were opened to British ships and commerce. Smith engaged in this trade, and it was in one of his voyages into the Pacific that he made this discovery. No profit arose to him from his discovery, and after spending some years in trading to the ports of South America, he returned to Blyth a poorer man than when he left it. He afterwards became a North Sea pilot, and resided in London.

I cannot conclude this account of Smith without noticing the strange circumstances under which a daughter of his met her death. She was the wife of Mr. Christopher Short. Having no family, Mrs. S. went to sea with her husband for many years, and had thus visited most parts of the world. Short was master of the Mary Florence, and was taking a cargo of coals to Aden; they had nearly reached their port, when the ship grounded two miles south of Graurdifu, on the African side of the entrance to the Red Sea. The chief officer's account of the affair is as follows : —

We remained by the wreck three days, during which time the natives appeared friendly ; Capt. Short, fearing the ship might go to pieces, sent me on shore to receive his wife; after Mrs. S. came on shore, I left her with the second officer, the steward, and three seamen, and went on board and had some conversation with Capt. S. I returned on shore with one of the chronometers ; in about half an hour I tried again to go on board, but the natives cut the line, and let me into the surf. I was making all haste towards the beach, when I met Mrs. S. wading up to the knees in the water, crying, and telling me that the natives had taken the rings off her fingers, and had chased her into the sea. I then swam out to wards the wreck, and hailed for them to send a boat, which they did, but without any one in her and without oars, however, we put Mrs. S. into her, and tried to pull off with the loose thwarts and the keel planks. After getting pretty well through the surf, the boat unfortunately swamped; I then got hold of Mrs. S. and tried to swim to land with her, but a heavy sea parted us; as soon as I could I turned round to see what had become of her, but it now being dark I saw nothing more of her; I then did my utmost to reach the shore, which I was enabled to do, thank God. I now found that the steward and one seaman were all that were saved, Mrs. S. and the others having met a watery grave.

On the day after this Mr. Short left the wreck in the long boat with that portion of the crew that had remained on board, without seeking any intercourse with those on shore, and, of course, ignorant of what had become of Mrs. S. and the people that were with her. He directed his course to Aden, where the chief officer joined him a month afterwards, and told him of the fate of his wife. Christopher Short was a native of Blyth, and belonged to a branch of the family of the Shorts of the Link-end. After the above mishap he gave up the sea, and became an examiner in the Local Marine Board at Newcastle."