Blyth Library on Bridge Street is one of the main landmarks in the town. It has recently been refurbished and now incorporates Local Authority services.

The building began its life as a mechanic's institute. The Morpeth Herald of 1st January 1881 reported on the laying of the foundation stone in a ceremony of the previous Thursday 23rd December 1880. 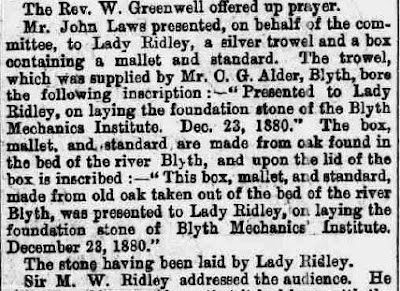 The stone was laid by Lady Ridley in front of many dignitaries. She was presented with a commemorative silver trowel to mark the occasion. Sir Matthew White Ridley was also present. The Ridley family were the main landholders in Blyth having purchased the estate in 1723. They lived at Blagdon Hall a few miles to the west of Blyth. The funding for the building came mostly from public subscription. The Chairman of the committee set up to raise funds and manage the mechanic's institute praised the residents of Blyth for having donated two thirds of the sum needed to start the building work in an act of commendable self help. This self reliance was even more commendable in the light of the austere times Blyth was facing. The 1870s had been a time of trade recession across the whole of Great Britain. 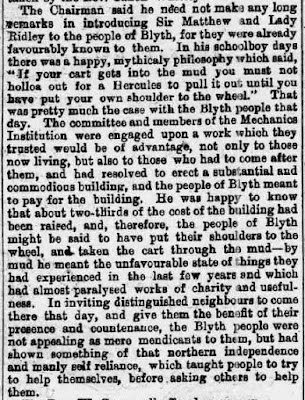 When the Mechanic's Institute was finally opened in 1882 a trade directory of the time (Kelly's 1894) described it:

"...erected in 1882 at a cost of £2000 [About £217,000 in 2015] on a site given by Sir MW Ridley bart who also subscribed £200 is an edifice of brick with a central clock tower, containing a clock costing £150, the gift of Robert Bell esq, shipowner [resided at Bath Terrace 1871 census]. The building comprises on the ground floor, a reading room, well supplied with newspapers and periodicals, a library containing 5,500 volumes and the offices of the local board for Blyth. On the upper floor is a lecture hall 56 feet by 26 feet and three class rooms. Petty sessions for the Bedlington Petty Sessional Division [are held here]."


The Wikipedia article on mechanic's institutes  gives a summary of their function:

"Mechanics' Institutes are educational establishments, originally formed to provide adult education, particularly in technical subjects, to working men. As such, they were often funded by local industrialists on the grounds that they would ultimately benefit from having more knowledgeable and skilled employees (such philanthropy was shown by, among others, Robert Stephenson, James Nasmyth, John Davis Barnett and Joseph Whitworth). The Mechanics' Institutes were used as 'libraries' for the adult working class, and provided them with an alternative pastime to gambling and drinking in pubs."

A tea was held later in the day at the Central Hall where Thomas Burt MP spoke of the benefits that mechanic's institutes had brought to the working man and praised the residents of Blyth in making this one possible after the disaster of the previous one having been burned down. 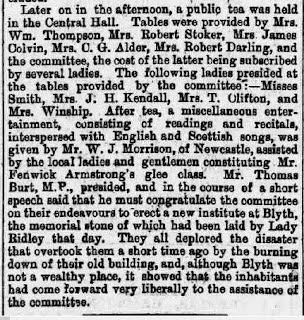 Kelly's Directory of 1894 states: "The Mechanic's Institute was first established in 1847 and in 1858 transferred to the premises of the Old Phoenix Inn [Northumberland Street/Bridge Street]." The Parson and White directory of 1828 lists the Phoenix as one of five pubs in Northumberland Street, the others being Star and Garter, Ship, Nag's Head and King's Head. Whellan's trade directory of 1858 states: "There is a Mechanic's Institution in Northumberland Street, Mr John Robert Forster sec and a news room in the same street which is well supplied with London and local papers, Mr John Dent sec."  It was thought the fire that destroyed the Mechanic's Institute had been started deliberately. During the 1870 and 1880s a great deal of property had been damaged in mysterious fires. It was found hose pipes had been cut and large rewards were offered for information leading to the capture of the culprits.

Sir MW Ridley used the occasion to give a speech to the persons assembled to witness the laying of the foundation stone about the current state of commercial development in Blyth. Ridley was the new baronet. His father, Lord Ridley, had died in 1878 and Sir Matthew White Ridley was still becoming acquainted with his business interests.


Despite the fact that Blyth was a productive coal mining town not much of the coal was being shipped through the port. The coal was being taken South by rail  to be shipped on the Tyne. The North Eastern Railway Company had not been persuaded to build a quay and put a railway through to the port of Blyth. 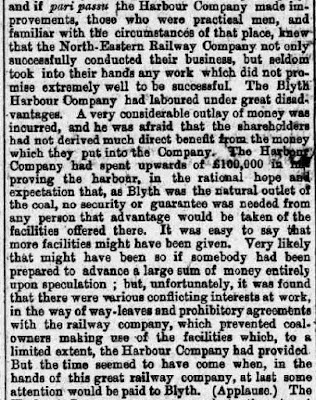 Although there had been considerable investment by the Blyth Harbour Company Ltd in improving the harbour it was not enough. Engineers had advised that a considerable extension of the pier and dredging of the channel to a depth of at least 15 feet was needed to cope with the types and size of ships now being used to transport coal and other goods. This advice had been met with procrastination. Now, these improvements needed to be made with some urgency if Blyth was to not lose out permanently once the depression in the coal trade came to an end. It was recommended that a harbour commission be formed to manage the port. This would be able to access public funds as development capital which a private company could not. This eventually happened in 1882 and the port began to develop in stages and by the 1960s was the busiest in England.

In 1911 the committee of the Mechanic's Institute were complaining the building was being used more for recreation, eg snooker, than for educational advancement.

In 1930 the mechanic's institute became a public library and the Official Development Handbook for Blyth of that year states:

"An up-to-date public library has recently been provided in Bridge Street. The library which comprises a lending dept, magazine room, juvenile reading room, reference room is well equipped in all its departments."