Standing on the dunes overlooking Blyth beach is a group of buildings which are noticeable but somehow not prominent. This is especially so as they now stand beside the iconic and colourful beach huts. The buildings probably look as though they belong to some utility company or other, especially as half of them are painted grey. And, they do often go unnoticed. But inside is a real treasure and one of the finest jewels in Blyth's crown. 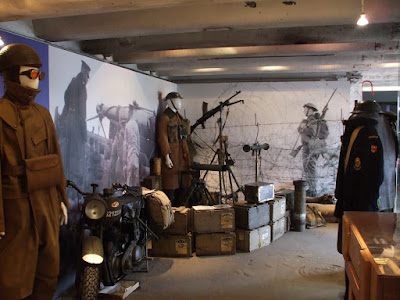 The buildings weren't actually erected to be noticed though. They had their beginnings one hundred years ago (1916) as a wartime battery. The Battery served as a fortified gun emplacement and observation post. It protected, from enemy ships, the river mouth and port of Blyth, which during WW1 was a secret submarine base. It was also an inspection base for ships entering the port. Shipping would have to contact the Battery by radio for clearance to enter.

The Battery has in recent times been turned into a visitor attraction and military museum run entirely by volunteers. The volunteers have put together a wonderful website http://blythbattery.org.uk/ which gives just enough of a teaser of what the attraction has to offer. This includes the five display areas of The Shelter, which is the cafe and main information/display place, The Magazine, which is the main museum area, WW2 Battery Observation Post, reconstructed as to how it would have looked at the time and including a WW1 officers dugout recreation, a room from a 1940s house and a Searchlight Building. The website also gives the latest details on special events, such as the Blyth Battery Goes to War Weekend of re-enactments and 1940's style fundraising dances.

But I wanted to know a little bit more in-depth information than the brochures give away and went along to meet stalwart volunteers Colin Durward and Tony Hodge. I chatted to them as we had a cup of tea, in the same cafe and rest room used by those troops many years ago, but now I was surrounded by displays of memorabilia and photos, as the guys were busily preparing for the big event of the year, that is the Blyth Battery Goes To War Weekend. 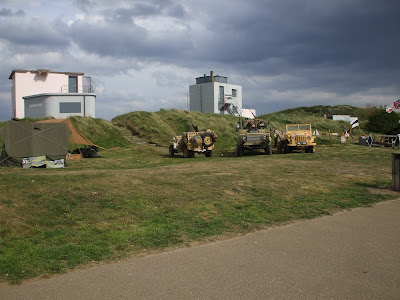 I first asked Colin and Tony why the Battery was worth preserving and turning into a museum?

It was explained that Blyth had been a large and busy port, even deeper than the Tyne. It was strategically important and suitable for a submarine base. Because of this it had an observation post. This is the only surviving observation post in the world. It is unique and is protected as a listed building by law. There had been smaller batteries at Tynemouth, the Robert's Battery at Seaton Sluice and not too far along the beach at Gloucester Lodge, where there were two six inch guns hidden in the dunes. All of these have since been obliterated and so it was important to keep the Blyth Battery for posterity.

What was daily life like in the Battery during operational times of WW1 and WW2?

During WW1 the Battery had been manned by five officers and seventy-five men, at different times from the Royal Engineers, Royal Artillery and Tynemouth Volunteers. The soldiers were housed in temporary wooden huts and sometimes huge tents in the fields to the rear of the Battery. Colin showed me a post-war photo of the field filled with tents for some civilian event and he believes these were the tents connected with the Battery. The large gun was never apparently fired "in anger" at the enemy so it seemed like a huge amount of personnel to be employed at one battery. Wouldn't they be terribly bored? Colin pointed out that it took eight men alone just to man the gun. The men were kept constantly busy with the maintenance of equipment, everything having to be kept in good repair and they spent much time practising.

The large gun pointing out to sea in readiness for enemy shipping may not have been fired at the enemy but during WW2 the smaller anti-aircraft guns were. These were sited in concrete bunkers in the field to the rear of the Battery. I had assumed the bunkers were magazines for surplus ammunition with a tunnel leading to the battery. My mistake! No tunnel has ever been found as it happens. The magazine within the Battery complex, as Colin explained, was designed to take a direct hit from enemy bombing. It had a blast-proof roof made from re-enforced concrete. It was, in fact, a room within a room covered by a thick layer of sand. In the latter part of WW2 it had been the job of the Home Guard to man the Battery.

The Battery website states that in 2004 the Civic Trust Conservation plan came into being and the call went out to a dedicated group of local people to become involved. Colin and Tony elaborated. The Battery conservation is the responsibility of the local authority and about thirty years ago they commissioned a feasibility study into the best way to protect and preserve the Battery. By November 2007 funding had been secured for conservation. Around this period the county archaeologist was opening the Battery for visitors to have a look around during the Heritage Open Days during a weekend in September. A proposal had been made that the Battery could be turned into a visitor centre. Various local history groups, Tynemouth Volunteers and members of Colin's family attended the initial meetings and the team of volunteers was born. Colin's daughter, Holly, had been a volunteer tour guide at Horton Church. She wasn't particularly expert in this field, it was just something she enjoyed doing. She led the family in getting involved with the Battery. Colin had been a member of a shooting club, but knew very little of wartime history or the Battery, but once he pledged to volunteer he was soon immersed in the task.

It is remarkable that just a few years ago Colin and a good number of the other volunteers were so lacking in knowledge of the site's history as now to ask a question of the team is like having an encyclopaedia to hand. Obviously many hours have been spent in research and work behind the scenes.

When I put it to Colin that volunteering at the Battery seemed to have taken over their lives he rolled his eyes in an expression which said: "I didn't mean for it to happen, but I enjoy it really".

There are about thirty volunteers currently with the Battery. Some, like Colin, are heavily involved in maintenance work, building new displays and taking part in re-enactments. Some are entertainers, some local historians, and some just make tea for visitors in the cafe. But all are vital and welcome. Tony was asked to bring his jeep along to events and ended up becoming a dedicated part of the team, passionate about the future of the Battery. I hinted to Colin and Tony that the team seemed to be like one large, extended family and were working together with great unity. There was no disagreement to this comment.

The Blyth Battery Goes To War event in May has become an annual spectacle in Blyth's calendar. Other special event weekends are held throughout the  spring and summer months too. Many re-enactment groups, estimated to be one hundred persons this year, from all over the country, descend on Blyth to show off military hardware and uniforms. The culmination is a staged battle on the beach complete with more pyrotechnics than an AC/DC concert. It is also one of the highlights of the re-enactors year and they rough it for the weekend by sleeping in a true wartime spirit on the floor of the museum.

The special events had their beginnings right from the start of the Battery becoming a visitor centre. They had planned to ask the Duke of Gloucester to do the honours and cut the ribbon, but thought they also needed some entertainment on the day. (A Duke of Gloucester paraded his troops in a large military exercise in the late 18th century to the west of what is now Gloucester Lodge Farm, near the Battery.) They booked Colin Bourdiec, a George Formby tribute act and re-enactor. He became one of the volunteers at the Battery. More re-enactors followed till they had the size of event where the services of the Duke of Gloucester were not needed. Colin Bourdiec is a regular entertainer at 1940s style dances arranged by the Battery volunteers as social and fundraising nights.

The team also spend a great deal of time during the winter months, when the museum isn't operational, attending fayres and other events, trying to raise a few bob, otherwise they do have maintenance grants from the local authority, Blyth Town Council give some financial support and, of course, donations.

I asked Colin and Tony about the five main exhibit areas listed on the website. Where did all the stuff come from?

Colin explained that a lot of the volunteers had various bits and pieces in their own private collections anyway which they have loaned or donated. The Volunteers purchased three display cases to house small items in the cafe area. The rest came as the result of house and loft clearances. Although it is not an accredited museum they do keep meticulous and proper records of donations. And, although they are primarily a military museum they do display other exhibits from time to time.

2016 is the 100th anniversary of the Battery what have you got planned?

The "Goes To War" event will be larger than ever but 2016 is also the year that the Tall Ships Regatta comes to Blyth for the first time. The Battery will be open for a full week, with a field kitchen, a room with slideshows of local history displayed on a large screen, nautical-themed stuff, Killingworth Model Boat Club and a twenty-eight piece dance band will be playing.

And what of your future plans?

Last year a major piece of conservation work was undertaken on the turret which was shot blasted then painted. They hope to carry on in this way to get the site looking "nice" again and the buildings fully usable as there are still a few areas in need of improvement. The volunteers have a relationship, and a plan, with the local authority and English Heritage as obviously consent is needed to carry out work on a listed property, but generally the team are for the moment regarded as the custodians. Colin also said he would like to develop an idea of themed weekends where different displays are shown to give returning visitors something new to look at.

Both Colin and Tony were keen to stress their passion for the place and what they are doing. Blyth beach attracts thousands of people every day and they would like a lot more of those people to drop in to the museum or cafe. They like nothing better than to show off the results of all their hard work and to have a chat with visitors.

I felt the enthusiasm come through and was made to feel welcome. I am sure you will too.