A Town Hall on the Blyth Bus Station Site

On the 26th March 1943 the Morpeth Herald printed a short piece stating that land Blyth Council had purchased for the purpose of constructing a town hall, would now be sold to the United Automobile Company who would build a bus station on the site. The site had been used as an "ornamental space for many years". The money from the sale would be used to fund a new town hall.

The sale obviously went ahead as the site, in Post Office Square and Bridge Street, was turned into a bus station and still has that function today. 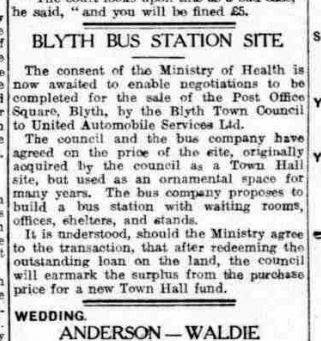 There is an artist's impression of a proposal for the town hall which appeared in the Blyth UD Council Brochure of 1912. The view is looking from the junction of Union Street and Bridge Street with the corner shop newsagents at your back and is a very ornate building.

The site had once been a small tributary of the River Blyth often called The Gote. A bridge crossed the stream at this point, hence the name Bridge Street. A marine construction site, known as a raft yard, and a saw mill operated on this site as shown on the early Ordnance Survey mapping, and some sketches, of the 1860s and 70s.

The stream was filled in piecemeal to accommodate new building from the 1880s. The sinking of the nearby Mill Pit in 1885 providing a great deal of the infill material. Gordon Smith in his book "Blyth: Through Time" states: "Wright's timber yard moved from here to the new Import Dock between 1905 and 1907 and the area has been used as a bus station from about 1923." The Ordnance Survey mapping of c1937 shows the area to have already been developed into an ornamental area. Several photographs which pre-date the announcement of the sale of Post Office, or Town Hall, Square to United Buses in 1943 show buses lined up collecting passengers on the West side of the square. Clearly the site had been used as a de-facto bus station for some time. The wooden building was also shown on the 1937 map and would probably have been connected with the bus company. 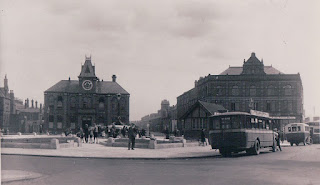 Photographs and maps after 1943 show a canopy for shelter to have been built on the West side of the square but it was not until the late 1960s early 1970s that the bus station was developed into something like the site we know today with offices and rest rooms.

Blyth Urban Disrict Council already had premises in Seaforth Street in 1912 and continued to use them after 1943. The "Blyth Official Handbook" of 1952 lists the Borough Engineer, Borough Treasurer and Housing Officer working from these premises, but the Town Clerk was operating from the newly-acquired Dinsdale House on Marine Terrace.

The rather grand, six-bedroom, Dinsdale House was originally the private residence of the Thompson Family of Red Stamp Stores fame, and was first occupied by them in 1899. It remained as a private residence for many decades.

The United Bus Company was founded in Lowestoft in 1912 and expanded operations into Northumberland during the 1920s. The Corporation buses ran out of Newcastle and extended their services with a bus to Seaton Sluice on 16th May 1921. On the 1st July 1936 the red United buses took over operations of the blue Corporation buses out of Newcastle. United was nationalised in 1948. In 1986 prior to de-regulation and privatisation the company was divided into three with the northern division being called Northumbria Motor Services Ltd.

A bus depot and workshops was built on land previously occupied by 19th century housing on Bridge Street which was demolished in the 1960s. A depot had been sited on Plessey Road in former times. Blyth Valley Borough Council in 2008 presented a planning document which set out the re-siting of the bus station in favour of developing an office and retail complex. It can be viewed at this link... Bus Depot Plan 2008