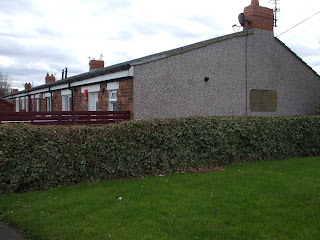 Tucked away from the road on a site which used to be the Cowpen Colliery is a row of modest cottages named Forster Memorial Homes. On 3rd September 1903 the Morpeth Herald reported on the opening ceremony for these cottages where many local dignitaries, including Thomas Burt MP and the secretary of the Northumberland Miner's Association, gathered to witness the handing over of keys to the first set of tenants. Ceremoniously the first door was opened with a silver key by the daughter of George Baker Forster, in who's honour the cottages were named. 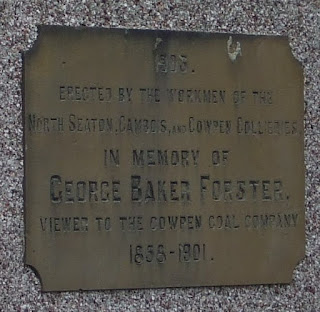 "When the late Mr Forster passed away more than two years ago the workmen of the collieries under the Cowpen Coal Company decided unanimously to put up a memorial to their departed viewer [colliery manager, chief engineer] who had won their esteem and respect."
"The cottages are self-contained, built in no shabby way and have two rooms. There is a pretty verandah and garden in front while at the back a cemented yard is provided with water and all the necessary conveniences." 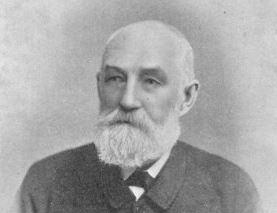 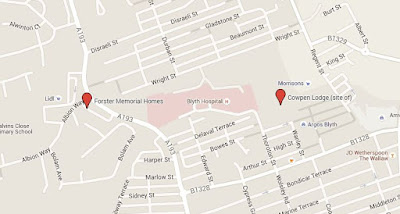 The Shield's Daily Gazette of 4th July 1901 reported on the publishing of his will. His estate was valued at £151,176, which is almost £17 million in today's money.  A memorial to him in the form of a stained glass window at a church in North Seaton, near Ashington was also being planned.

So why was George Baker Forster held in such high esteem by his workmen? Was this a rags-to-riches story? Not quite! He was born at Haswell, Co Durham on 13th October 1832 the son of Thomas Emerson Forster a well-known mining engineer and resident viewer of the colliery there. Several obituaries were printed in the newspapers at the time of his death on 18th January 1901. They seemed to be mostly based on the writings of Richard Fynes in his 1873 book "The Miners of Northumberland and Durham". Fynes was a former miner, then trader and later a theatre owner in Blyth. He remained a committed activist on the part of the mineworkers.


George Baker Forster had a good education and eventually ended up at Cambridge University. He rowed bow for the university team. Rowing was a massively popular sport at the time. Large sums of money could be won. George Forster gained much kudos, which he retained throughout his life, by being a champion rower, especially after his participation the Henley Regatta of 1853. The boat races of this year are still thought to be one of the most exciting and memorable on record. The records of the records of the Christ College Cambridge Boat Club state:

"R Gordon and J B Barlee entered for the Silver Goblets at Henley, winning by 2 lengths from G B Forster and J Wright (St John's Cambridge).

"It was the remark of several Oxonians that the rowing of Mr Gordon was unsurpassed by anybody - Chitty particularly admired it."
[ Chitty was J W Chitty, stroke of the Oxford Blue Boat in 1852 and Captain. ]
The Records of Henley Royal Regatta, by H T Steward, says:

"A capital race for three quarters of a mile, when the winners gradually drew ahead and won by two lengths. Time 10 mins."

He had considered becoming ordained to be a clergyman but returned to his native North East where he followed in his father's footsteps and served an apprenticeship as a mining engineer, living at Cramlington Hall. He married in 1854 and the Newcastle Guardian and Tyne Mercury reported:

"The marriage of Mr. G. B. Forster, son of T. E. Forster, Esq., the eminent mining engineer, was celebrated at Seaton Delaval Colliery on Tuesday amidst every sign of rejoicing. No less than 150 flags waved from the houses and the boom of cannon was heard from morning till night, when the health of the happy couple was drank by the numerous workmen with unmistakeable fervency."

Thomas Forster was the viewer of Seaton Delaval Colliery in this period.

It was in 1858, with an apprenticeship completed, that George Baker Forster was appointed as chief viewer of Cowpen Colliery, which had recently come under new ownership. He remained the viewer until his death - a period of 42 years.

North Seaton collieries, near Ashington, were soon after amalgamated with Cowpen and Forster also developed the royalties at Cambois and Newsham with new pits. By the time of his death the output of these collieries had been raised to one million tons per annum. He became a consultant engineer, along with his father, to many other mining organisations. He also became a highly active and influential Blyth Harbour commissioner - the development of the port was essential to the growth of the local coal trade. He was Chair of the local education board and by 1880 had risen to become President of the North East Institute of Mining Engineers.

"He first came prominently before the public in connection with the Hartley disaster and the part he played in endeavouring to clear the shaft not only proved him to be a man of great skill and ability but one possessing a generous sympathy with his fellow men. Since then he has often taken part in public matters connected with collieries, and has won a confidence not only of the majority of the coal owners in the district, but also in the entire body of men. [Hartley, 1862, probably the most famous mining disaster of all times when over 200 men and boys perished underground when the shaft became blocked]."

He played a prominent role in the rescue efforts at several other subsequent colliery disasters including Walker later in November of 1862. He was the Chairperson at the meetings of colliery owners following the Seaham Pit explosion of 1880. His role in these rescue efforts may have won him some respect among the ordinary workmen, but he seems to have been diplomatic and benevolent in his dealings with those of a more lowly position as illustrated by these newspaper cuttings:

"On New Year's Day, G. B. Forster, Esq., met the workmen of North Seaton Colliery, when, after a calm discussion of the change proposed to be introduced, an agreement was come to, by which the men will resume work on the footing on which they left, without reduction of becoming subject to the yearly bond. The Cowpen Collieries have not yet come to an understanding. Their notice will expire on the 16th inst., but it is hoped that before that time an amicable arrangement will be come to." [Newcastle Guardian 10th Jan 1863]

The Shields Daily Gazette said in obituary on 19th Jan 1901:


"...and he was mainly instrumental in building a place of meeting for the men at the first named colliery.
The deceased gentleman, throughout his life, took a most active part in public affairs at Blyth. He sat as one of the representatives of the coalowners upon the Blyth Harbour Commission. During his earlier days he devoted a considerable amount of his time to the general education among the working classes all through the Northumberland coal fields, and took a leading part in the establishing of mechanics' institutes at the different collieries. A further proof of his great interest in educational matters may be found in the fact that for twenty one years he sat as chairman of the Cowpen U.D. School Board, being its first chairman and holding the office continuously until six years ago. His death occurring at this period forms rather a coincidence when a new Board is being elected, almost exactly six years from the deceased gentleman s retirement.
He sat as chairman of the Blyth Bench of magistrates and for a large number of years earned a high reputation for his fair, judicial interpretation of the law. In mining affairs he was a man remarkable for conciliatory methods, and to this reason the fact is owing a large number of local, and what would have been otherwise petty disputes, were taken in hand and settled by himself instead of having recourse to the Joint Committee or Conciliation Board. He led a most active and industrious life, and a noteworthy feature in his career was his plain method of living."

On taking up the post at Cowpen Colliery in 1858 he resided at Cowpen Lodge, which was on the site of part of Morrison's supermarket. This was presumably owned by the Cowpen Colliery as Thomas Hindmarch, a manager under Forster, was later to reside there. By 1862 Forster was the resident at, the rather grand, Backworth Hall, which is about five miles south of Blyth. Backworth Hall still stands and is now a golf club clubhouse.