Alan Carr and The Burradon Mining Disaster of 1860

One of Britains' best entertainers, Alan Carr, came to Burradon on 30th October 2011 to unveil a duplicate montage dedicated to the 1860 Mining Disaster.

This was at the invitation of the Burradon and Camperdown Forum after Alan had discovered 11 of his ancestors and relatives had perished in awful circumstances in the pit explosion. Alan was made aware of these facts while filming for the BBC programme "Who Do You Think You Are".

A montage was originally created by artist Paul Allan for the commemoration event held on 2nd March 2010. This was erected in the school, but was of limited availability for the public to see, therefore a second montage was commissioned and unveiled on Fryers Millenium Green. Photos of the event...https://goo.gl/photos/s8nM1cmEY8L1cMYc8

This is a draft copy of a magazine article on the WDYTYA? programme... https://drive.google.com/file/d/0B8uwCkN5_X3UREZZZmw5akNQbEE/view?usp=sharing 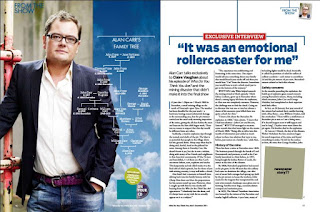 John Carr a Victim of the Mining Disaster and his Descendants


John Carr was one of two men who had walked away from their work at Burradon Colliery about six weeks before the disaster which occurred on March 2nd 1860. He was very critical of the pit's condition, having witnessed the presence of explosive gases and vowed never to go down the pit again.

On the morning of March 2nd, the family being now almost destitute, his wife enquired of him how they were going to manage. He told her to "Lay the pit claes out", and he set off reluctantly towards the colliery and proceeded underground to start a shift. He died in the explosion.

Some time ago, I received an email from a lady in Australia named Pam Abercrombie, a direct descendant of John Carr. She had read the appeal for more information on the disaster and supplied details of what happened to the Carr family, and their emigration to Australia, post 1860. Here is some of the information below:

John was born abt. 1817 and was living at West Cramlington Colliery during the time of the 1841 Census.

John married Dorothy Hughes on 30th September 1843. They were both living in Hazlerigg at the time. John's occupation on the marriage certificate is Pitman. Johns father Caleb Carr was also listed as a Pitman.

John and Dorothy were living in Downs Lane, Hetton Le Hole with their four children Samuel, William, Joseph and Elizabeth according to the 1851 Census.

1860 - According to John's death certificate he died on 3 March 1860 at Burradon Colliery aged 40yrs. Occupation Pitman. Cause of death - Explosion of gas. Information received from Stephen Reed, Coroner for Northumberland. Inquest held 3 March 1860. His death was registered 30 April 1860.

1861 - John's wife Dorothy was living at 16 West Row (within?) in the village of Hazlerigg with her children, William 14, Elizabeth 10, John 8, Richard 6, Robert 4 (my great grandfather) and Ann 1. Her son Joseph was not living with the family at this time but was living with his Aunty and Uncle.

1864 - John's wife Dorothy remarried to Elijah Davis, he was also a Pitman and they were both living in Hazlerigge and in 1871 were living at Bedlington Colliery. Fortunately for the Carr family that followed, John and Dorothy's children retained the Carr surname and in fact according to following Census information 1881, 1891 Dorothy is again documented as Carr.

John's son Robert (my great grandfather), was a coal miner according to his marriage certificate and was living at Barrington Colliery in 1880.

Robert came to Australia in 1885 with his wife and young children including my grandfather John. The family settled in Newcastle NSW and Robert worked in the coal mines here (unable to cofirm which one at this time).

All of Roberts sons were coalminers here in Newcastle as were their sons. My Dad included.

On the 6 December 1925, my fathers older brother John Robert Carr lost his life at Burwood Colliery. He was only 19yrs, employed as a "Main Roads Driver". He was unharnessing a horse at the pit bottom, when the horse bolted. His hands were caught in the reins, he was dragged behind the animal and was crushed against the ribs of the colliery.

The generations which have followed have chosen not to work in the mines.

I have grown up surrounded by staunch Union supporters, both men and women, in fact my Dad's sister, great grandaughter of John Carr who died at Burradon Colliery, was a great supporter of workers rights and I can remember being dragged off the footpath by her during a protest march to join the protesters as a child. She is nearly 90yrs old now.

I would like to think that my great great grandfather John, would have been proud to know that his family has continued to speak out for the working class man as he did all those years ago.

There is so much more to know about our family history, but finding John has given us a good insight into who we are. My family have been Australians for almost
100yrs, but still feel the connection with Northumberland and still call it "The Old Country".
Posted by Alan Fryer at 14:12