The reverse of the Burradon Union Lodge banner, created in the 1950s, features the picture of a building with the slogans "Education and Advancement" underneath. It has been suggested that the painting on the banner is modelled on Burt Hall.

Burt Hall is in Newcastle-upon-Tyne, opposite the City Hall on Northumberland Road. The hall was built in 1895 as the trade union offices of the Northumberland Miner's Federation. In 1907 this union affiliated to the national Miner's Federation of Great Britain. In 1945, this became the National Union of Mineworkers, and the association became its Northumberland Area. It was not only offices, but the building also featured a large meeting room and it would have been a place familiar to the union officials. But it wasn't specifically an educational establishment.

The hall was named in honour of Thomas Burt, a self-educated miner, who was the secretary of the Northumberland Miners' Association for 27 years. He became the first working-class MP in 1874, for the constituency of Morpeth. Surprisingly, he is not featured on many of the post-nationalisation banners. Hazel Edwards, in her 1997 book "Follow the Banner" attributes this to Burt retaining his Liberal affiliations and ideologies when by the mid-20th century the miners' union and Labour Party had become deeply intertwined. Edwards also suggests the building is not local and is modelled on a standard educational training college. This was an image that was copied on to many of the Tutill manufactured banners as a standard catalogue item. Burt Hall and the banner image at first glance do have similarities but closer inspection reveals they cannot be the same building. 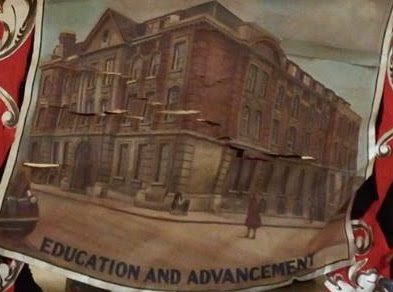 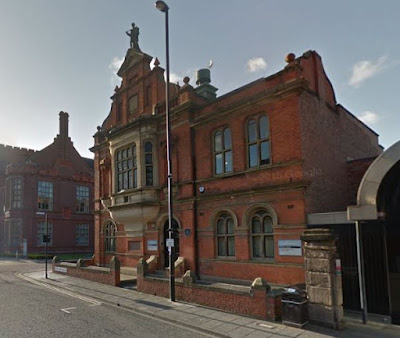 It was a common theme on union banners to display the images of inspirational political and union leaders. On the Burradon banner two medallions contain the images of Keir Hardie and Clement Atlee. Keir Hardie was featured on more miners' banners than any other leader. He was a Scottish miner who rose up to create the Independent Labour Party in 1893 and become an MP. Clement Atlee was described by Hazel Edwards as an "unlikely hero" to the miners as he was from a middle class background. But he was Prime Minister of a post-war government that introduced nationalisation and the welfare state and a popular speaker at the miner's picnics. He was still Labour leader when the banner was created in the early 1950s. Other popular images of union and political leaders to feature on miners' banners in the North East were of Robert Smillie (1857-1940) who campaigned for nationalisation during the Sankey Commission of 1921, Arthur James Cook (1885-1931) who was a key agitator in the 1926 General Strike and Manny Shinwell MP.

Hazel Edwards also states: "The miners appreciated the power of an educated workforce and education is a familiar theme on their banners". This statement certainly seems to be borne out when the history of miners' self help initiatives is studied. In 1841 Anderson Stoker is listed as a schoolmaster on the census. In 1851 Edward Anderson had the title of schoolmaster and also steward of the Weslyan Methodist chapel. The teaching was at the Sunday School of the chapel. On the ecclesiastical census of 31 March 1951 the Sunday school attendance was 56 persons in the morning and 30 in the afternoon.

The Newcastle Chronicle in a series published in 1872-3 called "Our Colliery Villages" wrote:

"The most intelligent of the Burradon miners are justly proud of their school, which is larger than either the Seghill or West Moor ones, and is their own property. There is a compulsory payment of 6d. per fortnight by each married man, the young men and boys, who can have the advantage of the night school if they choose, paying 3d. per fortnight. The school is a mixed one, and the aggregate average daily attendance is 164. As nearly all the denominations are represented among the scholars, the teaching is purely unsectarian. There is a news-room and small library attached to the school, but it does not number on its list more than 30 members."
[The miners of West Moor had commented that their news room was too close to the colliery offices where officials where always in proximity and: “A chep was afraid to speak his mind”. The school was built in 1861, which was prior to the state taking responsibility for education in 1870, and was in part funded by the explosion disaster relief fund from 1860. The Chronicle reported that the news room at New Delaval, Blyth, was "well attended".]


A mechanic's institute was built by the mineworkers in the 1890s which had an educational as well as a recreational purpose - an alternative to the pub.
Posted by Alan Fryer at 12:35