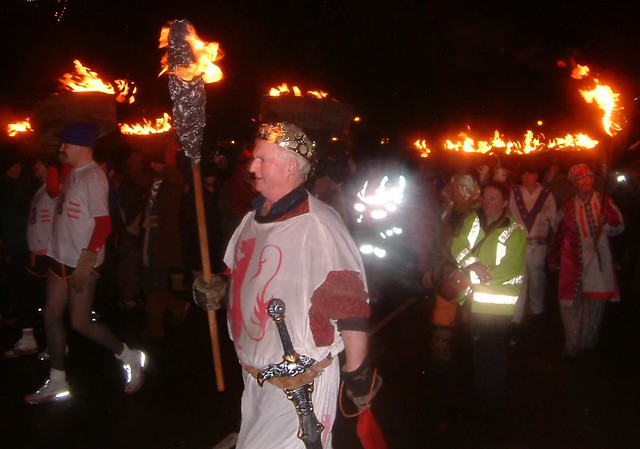 According to the BBC section of their website titled "The Ten Ages of Christmas" the modern celebrations as we know them didn't begin until the early Victorian period, with crackers, decorations, scrooge, the right jolly old elf, the Great Escape on the telly and Fenwick's window becoming the norm.

Christmas was celebrated in medieval and early-modern times but would consist of a special meal and where possible a gathering of the immediate family. The custom of Yuletide log burning was observed from Christmas Eve until 12th night on the 5th January. Surprisingly, Christmas did not consist of having decorations up from September and listening to Slade records from November 6th every year. It's unthinkable? Samuel Pepys mentions in his diaries of the late 17th century that he made a point of attending church on Christmas Day. Sometimes twice.

William Brewis a farmer of Mitford, near Morpeth, briefly mentions Christmas celebrations in his diaries kept between 1833-1850.

Thur 25th Dec: Christmas Day had all my friends to dinner the weather being so fine, they enjoyed themselves.

In later years he mentions his two brothers and Brother-in-law spending Christmas Day with him travelling from their farms elsewhere in Northumberland.

On Christmas Day 1847 Mr Potts and son came over from Rothbury to celebrate Christmas with him, but his relationship to them is not stated.

Even in this period, however, Christmas was a relatively low-key affair in Northumberland.

As a kid growing up during the 60s and 70s in a Northumberland pit village I can remember the local colliery band performing in our street on Christmas morning. They played a carol and then moved a few yards further along, collecting a few coppers for charity along the way. It wasn't the norm though. I can only remember it happening once. It was an un-seasonably mild Christmas Day that year.

The brass band in the British style consistes of 27-29 players and is limited to specific instruments not including trumpets or French horns.

Brass bands are not unique to the North East but developed among industrial workforces in factories and mines throughout the country.

The modern form of the brass band in the United Kingdom dates back to the 19th century, with a vibrant tradition of competition based around local industry and communities. Most of the instruments used in British brass bands had been in use for some time in village, church and military bands, and in the 1840s and 1850s the brass band emerged from these as a popular pastime. Brass bands were a response to industrialisation, which produced a large working class population, technological advances in instrument design, and the mass production to manufacture and distribute the instruments. Many UK bands were originally either works bands, or sponsored by various industrial concerns. This was particularly evident in coal mining areas, such as the Grimethorpe Colliery Band.

The closure of heavy industries in the North East also led to the diminishing number of brass bands and their specific recorded histories. One band that has survived is the Backworth Brass Band. Their splendid website gives this bit of historical information:

Backworth Colliery Band was formed in 1886, and was part of the social element of the surrounding mine workings. The start of the band was funded in part by fundraising events such as concerts; the earliest dates to 1871. The band was originally a Wind Band (including instruments such as clarinets and flutes) but become wholly brass in the 1920s. The band rehearsed originally in the Miner’s Welfare, then across the road to Backworth Club, which served to house the band for nearly 80 years until 2004. The membership of the band has been traditionally drawn from the mining community. However as the mine works diminished, the band’s membership has changed and the band now has a membership compromising of people from many walks of life.

One tradition that is unique to the North East is the Rapper Sword Dance. The Royal Earsdon Rapper Sword Dancers have been one of the most prominent of the past dancing groups. Sword dancing has been around for a very long time but developments in metal technology which occorred during the 19th century allowed for a more flexible sword.

Wikipedia elaborates on this history:

At some stage in the nineteenth century, the rigid swords were replaced by flexible rappers. Very little is known about this major development in the tradition, due to an absence of sufficient evidence, and it may have been entirely accidental. It is commonly thought that the flexible version was used for removing dirt from the backs of pit ponies, but, there is no available documentation to verify this theory.

The dance requires five performers who co-ordinate themselves whilst using "rapper swords" made from flexible steel. Accompanied by traditional folk music, the dancers wear specially-designed shoes that allow for percussive foot movements. Mental alertness, in additional to physical agility, is required in order for dance participants to effectively utilise the swords without causing harm to themselves or the other performers. During the nineteenth century, teams of rapper dancers from the pit villages of Tyneside, and later Wearside, would travel annually to the towns of Newcastle upon Tyne, Sunderland and Durham to perform the dance for the crowds. The costume in which the dance is usually performed, referred to as the "kit", is a stylised version of the working clothes of the local nineteenth century coal miner. Some traditional teams decorated their kit with ribbons or rosettes, and added a tie and/or waistcoat.

After the Second World War, the tradition progressively declined in the original pit villages, partly as a result of social changes in the mining communities.

The Newcastle Kingmen are ensuring this tradition survives and their website is a mine of useful information and some video footage of the dance being performed.

A piece broadcast in June talked about scarecrow festivals and the midsummer eve fire ceremony at Whalton. Both have a bit of a pagan feel to them, but on investigation were found to be revived traditions and not very ancient at all.

It was of some interest, therefore, when I came across some photos of the New Years' Eve Allendale Tar Barrel celebrations on the internet. Dressed in quite sinister-looking costumes the guisers parade flaming tar barells on their heads, through the town, and then at midnight dump their barrels onto a huge bonfire in the town square. It looks like something reminiscent of the Wicker Man movie.

Was this of ancient origins? Nope! But it is still a spectacular and unique event.

The information-britain.co.uk website gives a background to the tar barrel ceremony:

The Allendale tar barrel ceremony almost certainly dates from 1858, making this magical procession a callow youth compared to many others in the country. But the sight is extraordinary, and the pride that comes with involvement is enormous.

As so often elsewhere claims of pagan roots or strange Viking ceremonies have attached to the Allendale event, but the reality is that it started when the town’s silver band parade on New Year’s Eve, normally lit by candles, took place on a night of gusty winds that made candles impractical. Some bright spark (sorry) seemingly solved the problem with barrels of lighted tar carried on the heads of the town’s strongest men. The flames were protected from the wind, the hefty barrels were stable once aloft, and a tradition was born.

The right to carry a barrel is hereditary, and the source of great pride and pleasure. The guisers wear strange uniforms of bright colours.

BBC4 broadcast a piece on this event hosted by the Unthanks. It's worth checking out...
Posted by Alan Fryer at 10:55