The West Sleekburn Raid of 1449

The Ogles were one of the most prominent and influential knightly, landed gentry families in Northumberland during medieval and early modern times. They held large amounts of land in the South of the county and owned small castles at Ogle and Bothal. The family first came to my attention as the holders of the estate of Burradon, a village that I have studied the history of intensively over the last few years. Randomly searching the internet for something or other this passage came up in the search results and grabbed my attention:


On the 20th of June, 1449, he, as Sir Robert Ogle the younger, knight, of Ogle, and Thomas Ogle, brother of the same, esq., and others, took by force of arms many head of cattle, sheep, etc., within the liberty of West Sleekburn and Camboise. On account of this raid an inquisition was taken at Bedlington on the 24th of July, following, and he and his brother were probably soon after outlawed, for we find that Sir Henry Percy, afterwards third earl of Northumberland, and Robert Manners had a joint grant of the goods and chattels of Sir Robert Ogle, knight, who had been outlawed.   It is probable that as both these gentlemen were connected to Sir Robert Ogle the grant was in trust only.   Ten years after, in 1459, Sir Robert was sent with his father as ambassador to Scotland. 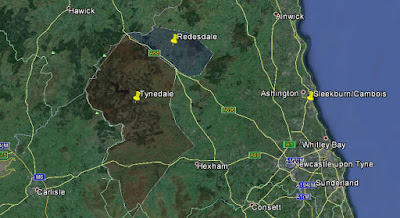 The mid 15th century was a time of almost constant hostilities with Scotland and a lawless way of life along the Border counties that we associate with the Border Reivers, although this lawlessness would continue to get worse during the 16th century. But it still struck me as odd that a knight would need to steal, in such a violent fashion, from a more lowly neighbour. Surely Sir Robert would have been expected to serve in a leading role as defender of the peace and law? Why was he risking his reputation and position in society for a few head of cattle? Why was he raiding so close to his base at Ogle when his crime was more likely to be detected and a chase and capture much easier to fulfill? It is less than fifteen direct miles between Ogle and Sleekburn. What did it mean to be outlawed and why ten years later did Sir Robert Ogle and his brother seemingly regain their positions in the establishment.

The areas of Tynedale and Redesdale are the territories usually associated with Border Reivers. They were liberties outside of the King's justice and not well managed. They soon descended into chaos. But Henry Summerson in his article "Peacekeepers and Lawbreakers in Medieval Northumberland c1200-c1500" stated that there is a "time-honoured assumption of the exceptional lawlessness of medieval Northumberland". Sleekburn and Cambois are in the very south-east corner of the county, some distance away from Tynedale and Redesdale. It wasn't that there was no justice or law enforcement in Northumberland, as with anywhere else in England killing and stealing were not just breaches of the peace, which every king swore to maintain in his coronation oath, but mortal sins - violations of the commandments. The King could lend his authority under God to his magnates who in their right to exercise that authority could hang their manorial tenants if convicted of a crime. But clearly the justice system was not working as well as it should have. There was an increasing impoverishment and militarisation in the county after 1296 - twenty-one paupers were crushed to death during the distribution of alms at Cambo around this time.

Summerson has studied the existing records of the trials of prisoners held at Newcastle, known as gaol deliveries. These were generally held twice per year and later in the medieval period only once per year. He found a very low conviction rate:

Summerson gives some evidence to suggest why not as many people as expected were being convicted. One is that it was dangerous to apprehend such dangerous and violent men anyway. There was also some suspicion of corrupt juries, who probably knew the accused to some extent, this being a small and tight-knit community. Perhaps the most plausible suggestion is that the residents of Northumberland were more accepting of crimes such as sheep stealing in this lawless society as opposed to what was accepted nationally.

At the Newcastle gaol delivery session of 1427 forty-nine of the sixty-one offences recorded involved the removal of livestock. Importantly the class of the accused was listed: two were gentlemen of a titled status and thirty-one were land-holding farmers classed as yeomen. Significantly these were men who owned horses: essential in the thieving of livestock. Summerson though stated that most persons on trial at the gaol deliveries were poor, but not destitute.

Sir Robert Ogle had been outlawed. In English common law, an outlaw was a person who had defied the laws of the realm, by such acts as ignoring a summons to court, or fleeing instead of appearing to plead when charged with a crime.  An outlaw is declared as outside the protection of the law. In pre-modern societies, the criminal is withdrawn all legal protection, so that anyone is legally empowered to persecute or kill them. Outlawry was thus one of the harshest penalties in the legal system. It was not uncommon, however, for pardons to be eventually granted. But where was Sir Robert hiding out and for how long? It was likely that Sir Robert's brother Thomas had also been outlawed and could be the same person who, with William Manners, was living with Andrew Crauford, at Edinburgh, in 1456. Summerson also suggests that Ogle was accused of homicide two years after the Sleekburn Raid, which may be the real reason behind his being outlawed.

A clue to the attitude of Sir Robert Ogle and lawlessness in Northumberland amongst the upper classes can be gained from studying Robert Ogle's ancestors in the book by Roland Bibby, "Bothal Observed". His grandfather, Sir Robert Ogle III (1370-1436), was a Member of Parliament at times between 1416 and 1435. He was also High Sheriff of Northumberland in 1419 when the Scots invaded Wark Castle. He employed a cunning plan to retake the castle. When the castle was retaken he had the Scots slaughtered in a brutal fashion, which was considered unchivalrous. He was widely condemned for his actions. He also attempted to usurp his brother John Bertram's rights to the newly inherited Bothal Castle. He laid siege to the castle with a retinue of 200 men. According to www.parliamentonline.org :


"Despite protests from two j.p.s,Sampson Hardyng* and Sir John Widdrington*, he proceeded to invest the castle, to evict his brother, to make off with goods worth an estimated £200 and to destroy other property and crops valued at the same amount. Bertram’s strongly worded protest to the Parliament of 1410 elicited a prompt response, which led to the restoration of the castle and his brother’s appearance, under heavy sureties, before the royal council."

He was outlawed for this offence. He was pardoned a sentence of outlawry in 1421 for refusing to appear in court being sued for debts of £135. He was outlawed again in 1431 for not answering his creditors.

So, how could he remain as part of the elite for so long? According to Bibby the "Crown depended on such chieftains for defence". It appears as long as you were loyal to the Crown you had a certain immunity from justice. Sir Robert Ogle IV (d1469), father to the Sleekburn raider, supported the eventual victorious side in the Wars of the Roses and was well rewarded. He was already a Warden of the East March by the age of 30, but was made a baron, an ambassador to negotiate with the Scots and granted the Lordship of Redesdale.

It would appear that the Ogles were frequently in debt and that livestock stealing was a way of life as much to the to the gentry as the lower orders. The surname, or clan system, was also the norm in the border counties. The leaders of the surname clan were expected to provide protection and prosperity as a reward for the loyalty of their kinsmen. The records do not state, how many riders accompanied Sir Robert Ogle on this raid or what his motives were. But perhaps this paragraph from George Macdonald Fraser in his book "The Steel Bonnets" sums up the life and times of Sir Robert, who died quite young and did not accede to his inheritance:

"In the story of Britain, the border reiver is a unique figure. He was not part of a separate minority group in his area; he came from every social class. Some reivers lived in outlaw bands, but most of them were ordinary members of the community, and they were everywhere in the Marches. The reiver was a rustic, but in some ways a remarkably sophisticated one. In a modern charge sheet he would probably be described as an agricultural labourer, or a small holder, or gentleman farmer, or even a peer of the realm;he was also a professional cattle rustler... a guerrilla soldier of great resource to whom the arts of theft, raid, tracking and ambush were second nature."