Adjacent to Burradon Farm house, which is about six miles north of Newcastle-Upon-Tyne, stands a ruinous tower house. It is not easy to spot until you are almost standing beside it as it is hidden and shaded by large and ancient sycamore trees. It is known locally as the pele tower. 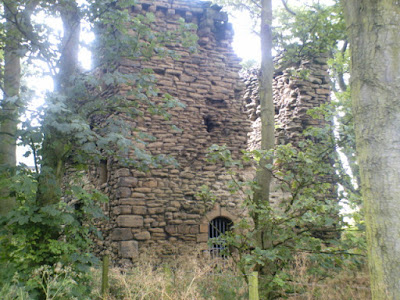 It is a typical tower house, if not slightly small. It was described by Pevsner as tiny. The external measurements are, twenty-five feet three inches by twenty feet six inches. The tower is three storeys in height, with an entrance facing east; this is a low, round arched doorway, with a crude attempt at decoration on its lintel stones. On entering the tower, above your head, is a parapet with spaces to fire arrows, or other missiles through (machicolations), to repel any unwelcome visitors. The ground floor is described as being a slightly pointed vault, with a small slit at the north end giving light and ventilation.

The first floor is reached by a newel (spiral) staircase. A square headed door leads into an apartment nineteen feet three inches by sixteen feet two inches. A fireplace has been added to this room sometime after the original building of the tower. This, on its lintel, bore the initials L.O. (Lancelot Ogle), the date 1633 and between the initials some floral decoration and two shields. This was still visible in 1940, But Robert Hughill noted in 1970 that no traced remained. The chimney and breast have now since disintegrated. In the south wall a large window was put in around the same time as the fireplace. This had fallen out previous to 1876, but the remaining sill shows it to have been a large window for this class of tower. It is believed there may have been a similar window to the west. It is also thought that the second floor was similar to the first. 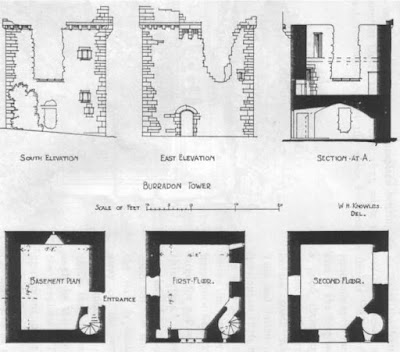 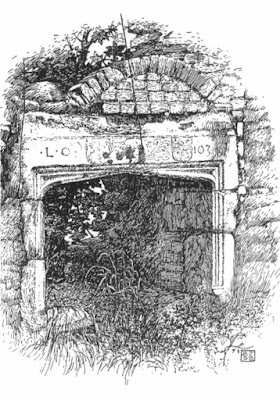 The relevant pages of the Northumberland County History, by HHE Craster, attribute the building of the tower to Bertram Anderson who came into possession of a portion of Burradon township in 1548. The evidence for why the construction is attributed to Anderson is not given. I wanted to find out if he really was the builder and why it was erected?

The period from 1296 to the early 17th century was a one of turmoil and strife in Northumberland. War with Scotland and internal reiving made this a relatively lawless, unsafe county, although the worst areas were in the wilds of Tynedale and Redesdale. Anybody who had the means to build himself a defensible dwelling did so. A survey was undertaken in 1415 and seventy-six defensible structures were listed, from the mighty Alnwick Castle to the tower of Weetslade "by the sea" of which no trace remains. According to Peter Ryder in "The Buildings of England:Northumberland" towers were becoming old fashioned by the mid-16th century.  Incorporating defence into a building, where affordable, remained a "wise provision". Towers became fashionable in South East Northumberland from the mid 14th century onwards. They were the dwellings of the minor gentry and often referred to as pele towers. However there were many classifications of defensible buildings and the fashion for their construction changed over time and particular region of the Border area.

Some towers were part of a larger establishment. Some stood alone. Others were adapted over time with a more habitable wing being added to the tower in more peaceful times after the Union of the Crowns in the early 17th century. Stronghouses were being built in the place of towers. If Burradon tower was constructed c1550 it was one of the last and possibly the most southerly? Burradon Tower was not mentioned in the survey of 1415. The earliest mention of the tower in documentary sources is in 1569.

During the the 12th century the lands of Burradon were divided into two portions. The Ogle family from the village and castle of Ogle, twelve miles North-West of Burradon, were put in possession of one half. The Ogles did not reside at Burradon, but sub-granted their Burradon lands to Peter Graper.

Graper was a wealthy and successful merchant of Newcastle. He was the mayor of Newcastle between 1304 and 1306. He is listed as paying a tax known as the Lay Subsidy for his property in Burradon in 1296 and 1312. Around the year 1440 a descendant of Peter Graper's, Alice, married Robert Orde. The lands were then inherited through the Orde family, although in two Inquisitions Post Mortem of the period 1428-1441 they were only valued at between 20-26 shillings because of the barrenness of the soil due to war and Scottish destruction. This suggests that the Orde family were not residing at Burradon (they owned many other properties and estates throughout the area) or that there were many tenants farming the land.

It was in 1548 that Bertram Anderson was conveyed the lands of Burradon by his uncle, George Orde. The www.historyofparliamentonline.org website gives this information on Bertram Anderson:

He was born around 1505 the 1st son of Henry Anderson and Ann Orde, daughter of Robert Orde of Orde. (Orde is a village in the very north of Northumberland near Berwick.) His father, Henry, was Sheriff of Newcastle in 1520, MP for Newcastle in 1529 and Mayor in 1532. Born c 1484 he died a rich and successful man trading in "coal, ships, merchandise and plate". It was thought Henry came of a minor merchant family that had not been settled at Newcastle for more than a generation.

Bertram Anderson already had the advantage of having been born into one of the great "municipal, commercial and parliamentary families of the City of Newcastle". He became a successful businessman in his own right, growing the already large family trade as a merchant adventurer and leasing coal mines around the Tyne. He played a leading part in the development of the coal trade. The period around 1548 was his most busy, productive and ambitious. The historyofparliamentonline continues:


"Anderson used the wealth from trade to build up a considerable landed estate starting in 1548 when his uncle conveyed him estates. It was in keeping with his emergence as a landholder that he became a shire official as well as a municipal one. His enhanced status is also reflected in the parliamentary return on which the merchant of 1554 becomes the gentleman of 1558."

It would seem the purchase of the one half of Burradon was to gain greater status and influence. The building of the tower was perhaps not all about status though. He would have needed a base to conduct his gentry affairs. The question still remains why he built such a "tiny" tower? Was he just being pragmatic as to how often he would reside there? It wasn't a main residence, but was it enough of a status symbol? Was it perhaps all he could afford to spend at the time? In 1553  Bertram Anderson is described as "of Burradon" in a list of border commissioners drawn up in this year, so why does he not refer to himself as "gentleman" until 1558? Had the tower not been built at this stage and he didn't feel fully established as a country gent?

Bertram was Sheriff of Newcastle in 1543, Mayor three times between 1551-64, Governor of the Merchant Adventurers in 1551 and MP for Newcastle between 1553-63. This is from "Men of Mark Twixt Tyne and Tweed":


"And possibly the person named in Nicholson's Border Laws as Bertram Anderson of Burradon one of the overseers of the watch from the Tyne to Hartford Bridge... All the honours that his fellow townsmen could bestow upon him, all the riches that successful trading wins were his... In the prime of his life he was smitten down with death... Laid in St Nicholas Church (Newcastle) with his wife and father"

There was of course a very extensive house and estate in Newcastle called Anderson Place built by Robert Anderson in the 16th century near the ruins of a Franciscan priory. This was bounded by modern-day Pilgrim Street and Blackett Street. It is not clear, despite the best efforts of some very distinguished genealogists, whether this was built by family members of Bertram Anderson. The house and grounds were purchased by Sir William Blackett in 1675.

In 1559 Henry Anderson, son and heir of Bertram Anderson, re-conveyed the Burradon lands to John Orde, son of George.

1563 - Bertram Anderson leased from the crown, for twenty-one years, the tithes of corn of Burradon,

1569 - A deed, produced in a later disputed court case, showed that John Orde conveyed to Oliver Ogle, a junior branch of the knightly family, the tower and moiety of the "manor" of Burradon. This took the form of a mortgage for eighty pounds over fourteen years. After the final payment was made Ogle was to hold the premises for thirty-two years as a tenant and farmer to the mortgagor (until c.1615).

In the 1570s the Ogle family took over residency of the tower and various generations of that family continued in possession until the mid-17th century. In fact, they eventually purchased both portions of Burradon. In the later 17th century the tower became the home of a succession of tenant farmers, although still in the possession of the Ogle family resident at Causey Park, near Morpeth. At a later stage a farmstead was attached to two sides of the tower. In 1833 T.M. Richardson noted in his descriptive text of a survey of Burradon that the tower was being used as the farm offices. The farmstead was demolished c.1860 leaving the tower once again alone and isolated.

There is a tradition within the community that a tunnel runs under Burradon Tower. Its eventual destination is unknown. In 1914 a group of engineers based at Gosforth Park, according to an elderly local resident, discovered this tunnel. It was found to be caved in at not a great distance along its length. Tunnels running from towers are not unheard of, but are not well documented. An area of intrigue for some further study, perhaps.

N.C.H IX
R. Huggill, Borderland Castles and Peles
N. Pevsner, The Buildings of England: Northumberland
Tyne and Wear HER 312
Internal Photos of the Tower from a former Farm Resident