In a field near Swarland Old Hall, with only a few sheep for company, is a gravestone surrounded by a metal fence. It marks the final resting place of William Heslerigg who died in 1681. It is a listed building.


It came to my attention through a posting on a Facebook group of some photographs taken by Luke Batchelor. I was especially interested in the posting because the Heslerigg family were the landholders of Weetslade Township throughout the medieval and early modern period. This is a place I have studied quite a bit in the past and have always wanted to understand more of the larger picture of the family. Sir Arthur Heslerigg was a major player in the English Civil War of the 17th century. His seat was at Nosely in Leicestershire and he was one of the five Members of Parliament whom Charles I unsuccessfully sought to arrest. He was later asked to be a signatory to the king's death warrant. The family continued to hold land in Northumberland until the late 18th century. 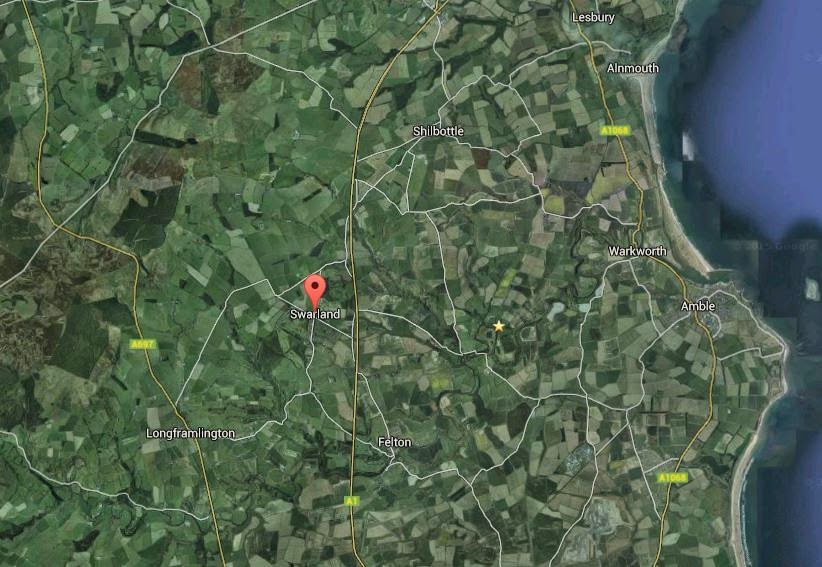 What was still clearly legible from the faded original 17th century monument was re-inscribed onto a new stone at some point in the 19th century. The main part of the inscription reads:


Here lies the body of William Heslerigge ...who departed this life the 12th day of April 1681 aged 68 years. This was grandson to esquire but yet here to lie was his desire. All worldly pomp did he abhor.

Although I was aware of the Heslerigge family connection to Northumberland I hadn't realised there were branches of the family still resident. I was curious to find out the extent of the Hesslerigge estates in Northumberland and the connection William of Swarland had to Sir Arthur of Nosely and why he abhored all pomp when clearly he came from such a wealthy and ancient landholding family?

This is what I already had investigated on the Heslerigg family connection to Weetslade and the village of Camperdown now in North Tyneside and the land surrounding West Brunton now in the City of Newcastle:


The northern part of Camperdown was in South Weetslade township, part of the parish of Longbenton, although a settlement did not come into existence here until the 1820s. The settlement was at first known as Heslerigg. When the name of Heslerigg was abandoned in favour of Camperdown a new colliery village 2 miles to the West adopted the name of Hazelrigg.
South Weetslade township was part of the Barony of Merlay, centred on Morpeth. It was held from the lord of Merlay by a family who took the name of Weetslade.

North and South Weetslade. The totals are:
Roger de Hall paid 2s. 8d.
John son of Robert 3s. 4d.
John de Yarom 2s. 8d.
Adam son of John 2s.
John of Kene 3s. 4d.
Robert son of John 4s.
John of Weetslade 5s. Total 23s.
It is almost impossible to know which of these taxpayers are from South Weetslade. It is interesting to note that in 1312 there were eleven taxpayers in Weetslade township as a whole, but only seven in 1336, although the seven actually pay slightly more tax. John of Weetslade is probably from north Weetslade as the family is mentioned there in previous subsidy rolls.


However the Swarland entry in the Northumberland County Histories dispute the claim made in the 1281 entry that the family were prior to this date from Hazelrigge, near Chatton, in North Northumberland. More evidence of this claim, they state, is needed to be certain. A branch of the Heslerigg family continued to reside at the estate in North Northumberland. Volume 14 of the NCHC states this about the settlement of Hazelrigg and the fortified tower house which once existed there: 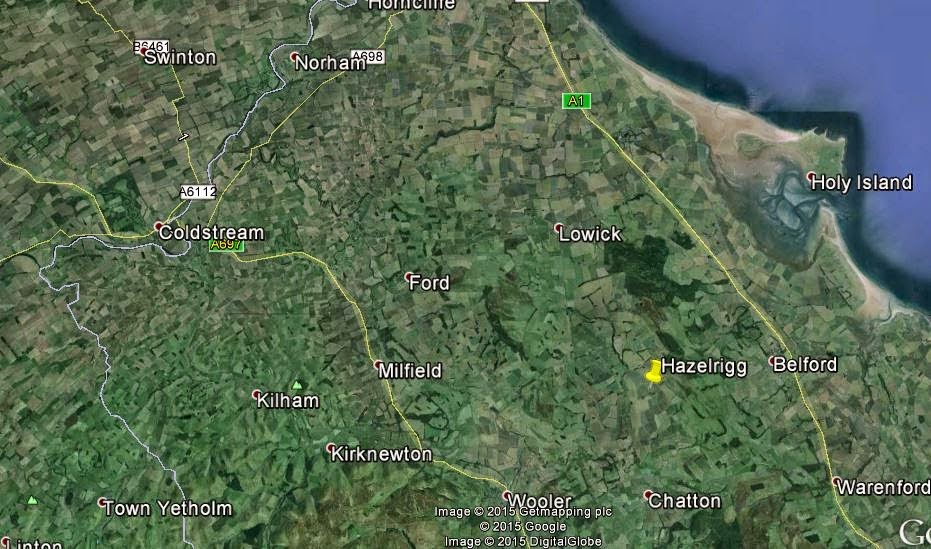 First mentioned c1514 when it could hold a garrison of twenty men... In 1715, a house was built from the ruins. The Hazelrigg family inherited Hazelrigg in the 13th century, but at the end of the 15th century, the last heiress had married Sir Thomas Haggerston and lived at Haggerston [Also in North Northumberland]. When Sir Thomas died in 1507, his widow returned to Hazelrigg where her stepson built a new tower on the side of a hill for her protection. It was a large fortification capable of housing 20 soldiers. It was attacked by 300 Scots in 1515 and set ablaze. Although repaired by 1538, it was a low, incomplete building in good condition. The Scots returned in 1546 and 1588 after which there is no further documentation. In 1715 there is a reference to a house having been built on the site out of the tower's ruins.

I would like to speculate the acquisition of lands in both Weetslade and Chatton were of roughly the same period. The lands may have been rewards for services on the battlefield. The family were high profile and actively involved in the dispute between England and Scotland in the late 13th century.

It was a William Heslerigg who had been appointed Sheriff of Lanark during the English occupation of Scotland. In 1297 he was on the trail of William Wallace, of Mel Gibson's Braveheart fame, who was by then leading a resistance movement against the English. After some surveillance work Heslerigg had tracked Wallace down to the house, in Lanark, of his lover, Marion, whom he often visited under cover of darkness (there were rumours they were actually married). Wallace found out in time that Heslerigg and his men were coming for him and managed to slip away. Heslerigg had Marion cruelly murdered which seemed to have been entirely unexpected to Wallace. In retaliation Wallace was able to break into the Sheriff's lodgings in Lanark. He murdered the sleeping Heslerigg by plunging a dagger into his heart. And so, the conflict escalated. Peace did not return to the border for many centuries.

William Heslerigg would have been a contemporary of Simon Heslerigg who was granted lands in Weetslade. The relationship between the two is not certain. The sources I have looked at so far have scanty information on the early Hesleriggs.

According to the "Baronetage of England" by William Betham, it was a Roger Heslerigg who came to England with William the Conqueror in 1066. He settled in Cumberland. The printed pedigree then jumps immediately to Simon Heslerigg, the Lord of Weetslade. There is over 100 years separating the two men. This must cast some doubt over the accuracy as to whether a Roger Heslerigg really was the founder of the English family. But Simon was the great grandfather of Thomas Heslerigg of Fawdon, near Weetslade, who, in 1396, married Isabel, the daughter and co-heir of Sir Roger Heron. The estate of Nosely, in Leicestershire, came into his possession through this marriage, the family still held Weetslade and West Brunton of course. There is then a further six generations of Nosely-based Hesleriggs before the famous Sir Arthur (died 1660) became the patriarch of the family.

The Swarland estate came into the possession of John Heslerigg, the son of William, by his marriage to Agnes Graper, in the period c1380. Agnes was the heir to estates from her ancestors of merchants of Newcastle and Northumberland. Members of the Graper family had served as Mayor of Newcastle in the previous two centuries. There is a further six generations between John Heslerigg and William who died in 1681 and is buried in the humble grave at Swarland. The grave is within sight of Swarland Old Hall which was built by the Hesleriggs in the 17th century and altered at various times since. It is an interesting building which has grade II listed status. It is now a Bed and Breakfast and family-run farm.

I have not found any sources as yet which gives a full pedigree of the family to establish the full relationship between these two branches or a link to the Sheriff of Lanark. However, the relationship between William Heslerigg of Swarland and Sir Arthur of Nosely could not have been close. They were perhaps only 5th or 6th cousins. It is worth noting that when Robert Heslerigg bequeathed the estate to the titled  Hesleriggs of Nosely in 1714 he used the wording "namesake" as opposed to family or any other term?

The Northumberland County History offers the opinion that the Heslerigg family: "After their settlement at Swarland they seem to have lived a quiet, unobtrusive life, allying themselves in marriage with the neighbourhood gentry, but taking little part in public affairs".

The will of William Heslerigg, proved in 1682 is very short and without fuss. All his possessions were left to his wife. His moveable goods are only valued at £20 (about £4000 in 2015). His grandfather, Robert, the esquire mentioned on the gravestone, died in 1638. His will requests that he be buried in the resting place of his ancestors in nearby Felton Church. William bequeathed around £300 to various family members. His moveable goods were valued at over £182. This is over twenty times more than William who "abhored pomp" was valued at. It is remarkable that a high status family could have kept such a low profile during the turbulent years of the English civil war and Cromwell's protectorate. Robert the esquire was obviously a person of some influence and standing to have been mentioned on the gravestone, but little seems to have been written of his life.

Perhaps a clue is in the description given to William on his refurbished gravestone as being a covenanter? This was a religious movement which had gained an importance in Scotland after 1638. It rejected Charles I's imposition of an episcopalian church upon Scotland. The Covenanters were part of the Presbyterian church of Scotland that believed:  "In the church, king and beggar were on an equal footing and of equal importance". This was completely at odds with the Church of England's hierarchal structure with the King at the top of the tree.  This was one of the factors in the cause of the civil war. The Scots allied with the parliamentarian forces against the King. The religious movement spread south of the border. After the civil war and especially after the restoration of the monarchy in 1660 the Covenanters were persecuted. Fear of persecution and his religious beliefs may explain why William kept a low profile and lived in relative austerity.

The postings of photographs of the grave on Facebook by Luke Batchelor caused quite a stir. Many felt the grave, and especially the railings surrounding it, could do with some TLC. A stonemason and blacksmith both offered their services for free and various others pledged to help in any way possible. The parish council and English Heritage was contacted who were supportive of the proposals. However other factors, such as a prize-winning flock of sheep made a restoration effort not viable at present. Maybe that's the way the man who "abhorred all pomp" would have wanted it?