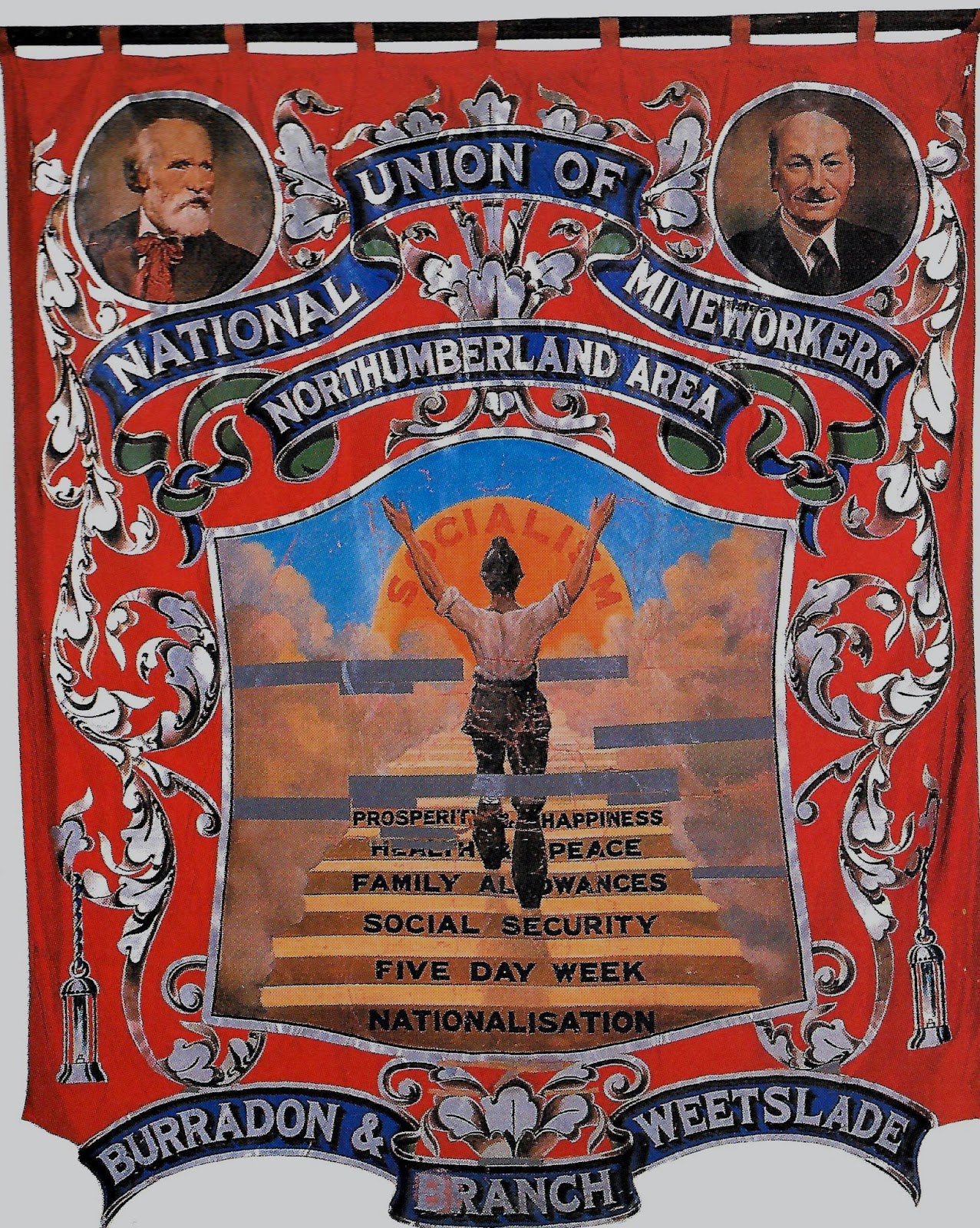 Burradon Primary School is home to a Northumberland miner's banner. It is one of only about twenty still in existence from the days when the British coalfield was still thriving. Most of the existing banners have been deposited with the Woodhorn Museum near Ashington and most of these were created after 1947.

Richard Fynes in his 1873 book "The Miners of Northumberland and Durham" referred to banner having been unfurled at a demonstration associated with the 1833 miner's strike. The banners obviously have a long history but even the most professionally-manufactured ones are fragile when subjected to wind, rain, mud and being stored under a damp working-men's club stage. The earlier ones have been destroyed or discarded when beyond repair. These early banners were also replaced periodically to reflect the changing aspirations, achievements and social conditions of the miners.

Burradon's banner is now also in a poor condition being held together in places with gaffer tape. A campaign has been launched to restore it to, as much as possible, its original condition, bearing in mind a well-meaning lodge official has previously butchered it by removing the lower edge to tidy up some previous damage. It is hoped that once again the banner can be a hub for community pride and around which village activities can take place.

The banners measure about 6ft by 5ft and are coloured using bright red, blues and gold hues. They are designed to grab your attention as are the statements which are emblazoned on to the banner such as "Workers of the World Unite" and "The New Vision".

It has been forty years since Burradon Colliery closed and thirty years since the miner's strike and the mass pit closures which followed soon after. The banners played  large part in the protests and social activities in pit villages in the mid 20th century, but the meaning and significance of the banners is not as well understood in post-coalfield days. I wanted to know more about their place in mining society.

The most comprehensive study of Northumberland miner's banners is by Hazel Edwards in her 1997 book "Follow the Banner". According to Hazel the manufacture of about three quarters of the banners can be attributed to the company of George Tuthill based in London and then Chesham in Buckinghamshire after 1940, their workshops having been destroyed during the war. There were other banner makers although not so well known as Tuthill. Bainbridge of Newcastle ventured in to this  trade for a short time. Tuthill produced a catalogue of standard designs. The more elaborate ones were obviously the most expensive. Or, for an even higher price, the banners could be more bespoke. The pitman painter Oliver Kilbourn designed a banner for the Ashington group of collieries which is often held up as a great example of banner artistry. Tuthill had been a showman and had transferred some of the tradition of fairground art into his banners. They also drew upon medieval heraldic design.

The Burradon and Weetslade Colliery banner now in the care of the local school is one of the better examples of banner design and is probably from the studios of George Tuthill although it is not signed. The exact date of the banner's creation is not known but it is likely to be between the years 1947-1951. The subject of the Burradon and Weetslade union lodge banner is nationalisation which happened to the UK coal industry in 1947. One of the featured portraits is of Clement Attlee who was Labour prime minister between 1945 and 1951 - the first prime minister of a Labour majority government. The exact cost is not known but evidence from previous Tuthill catalogues and other colliery banner commissions it was probably around £3500-£4000.

The obverse of the banner features the portraits of not only Clement Attlee, but Keir Hardie, the pioneer creator of the Independent Labour Party in 1893. Hardie was a former miner and union leader before being elected to Parliament. They were idols and figureheads to the mineworkers. Hardie's was a commonly-featured image on banners. The main central image on the Burradon and Weetslade banner is that of a miner climbing the steps to the sun with the words socialism emblazoned across it - representing the socialist utopian desire that the mineworkers had been striving for. The steps to this are labelled: nationalisation, five day week, social security, family allowances, health, peace, prosperity and happiness. These were the goals of the Labour government elected in 1945. The reverse of the banner showed a stock image of an educational building. Providing their own educational and welfare facilities had been prominent in the history of the Northumberland miners, with Burradon miners often showing a leading role in this. Burradon mineworkers had built their own school in 1860. Reading rooms, a mechanics institute, and a recreation ground soon followed. The miners appreciated the power of an educated workforce.


Nationalisation had been the long-held desire of the miners. They had for a long time campaigned that the profit of the coal owners had been put before the workers' safety. In 1935 fifteen miners were killed in the pits every four days, which was not much of an improved figure from seventy years previous. They got their desire for public ownership of the pits in 1947 following the election of a Labour Government in 1945 and many new banners were commissioned at this time to reflect this new status and the amalgamation of previous regional unions to form the National Union of Mineworkers and to celebrate the election of a Labour government.

One of the main places that you were able to see the banners unfurled was at the Northumberland Miners' Picnic. This annual gathering had been taking place since 1864. They were a mixture of recreation and political campaigning. The first picnic was reported by the Morpeth Herald in September 1864.

The mood, speeches and activities of the picnics is usually reported on in some detail in the local newspapers. After 1950 Pathe newsreels, cine film and the monthly magazine reports of the mining industry's own film unit, the Mining Review, capture the picnics and all aspects of colliery life. It can be traced through the changing banner design and tone of the speeches throughout the history of the picnics a shift in the mineworkers' attitude from a moderate, protectionist, self-help position to a one more class conscious, militant and less respectful of the directors of the coal companies.

The picnic was held at Blyth until 1872. The construction of a harbour shortened the links that the picnic had been held on. The venue then rotated at various time between Newcastle Town Moor for a brief period, Morpeth, Blyth again, Tynemouth briefly, Newbiggin briefly and then from 1952-1991 Bedlington was the picnics' home town. It still continues today although with much smaller numbers attending unsurprisingly, the venue being Woodhorn Colliery Museum.

The marching and parading was usually accompanied by a brass band. Most colliery villages had a brass band and it was an honour for a workman to to be chosen to play and represent their community.

By 1869 the Morpeth Herald is sending a reporter along to describe the activities of the Morpeth Brass Festival. Eleven bands take part on this day. Burradon is not among those listed and it is not clear whether any of the competing bands belong to collieries. Some colliery bands appear in the list by 1872 however, and in 1876 Burradon Colliery Brass Band is a competitor.