Looking through the English Heritage historic buildings listing page I came across an entry for a 17th-18th century gate pier at Link House Farm in Blyth. I wasn't aware of this gate pier even though I must have passed it dozens of times. To be fair, it is not easily visible from the road. http://list.english-heritage.org.uk/resultsingle.aspx?uid=1041335 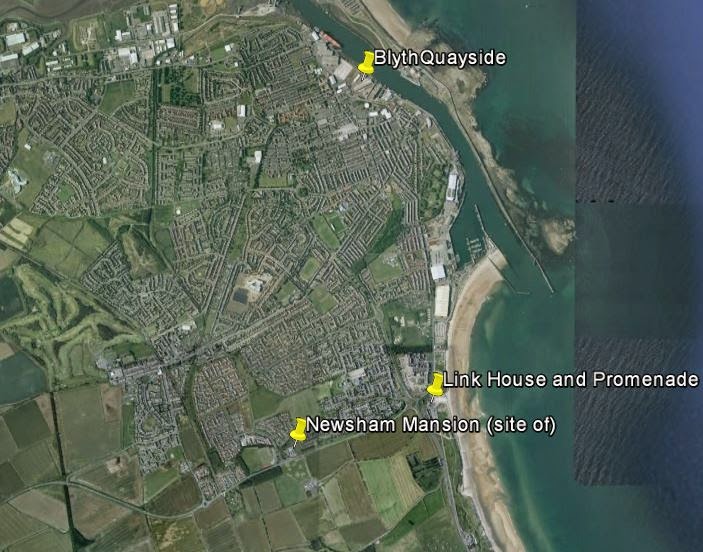 Link House Farm stands at the entrance to Blyth promenade where the Coastline Chippy and Blyth Battery are also located. The Newsham Burn runs through this site, but in modern times runs underneath the buildings via a culvert. Link House Farm is something of an oddity, being a derelict range of farm building surrounding the modern beach leisure facilities. I was aware of having seen photos of the site where a three-storey house had once stood and of it being occasionally referred to as a mansion in documents. I was curious to understand some of its history. 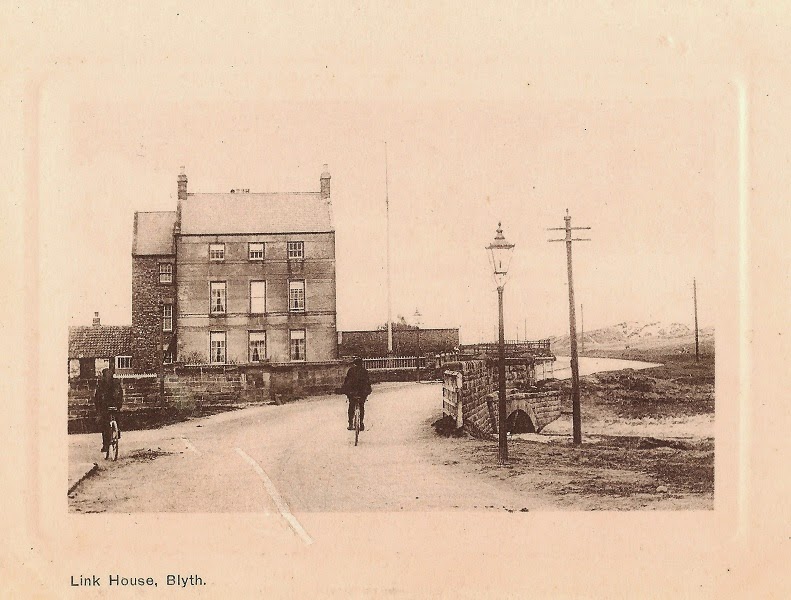 A quick internet search revealed a planning application had been made on the site for housing and a pub in 2009 on behalf of Lord Ridley. The development had obviously fallen by the wayside. No building work has taken place at the time of writing. An archaeological investigation was made to accompany the planning application though. The report was published under the name of the Bamburgh Research Project. This is a summary of the report's findings:

Link House Farm is first mentioned in 1683 as being occupied by Thomas Lewin. The source of this information is not given, but at a guess will be the Earsdon Parish register. It is not obvious from the sources I have read at what period the lands of  South Blyth and Newsham, that Link House Farm formed a part of, were enclosed from the open-field medieval system to create individual farms but it was probably not much before 1683.

Some background information to this period is given in the Northumberland County History Vol 9: The lands of South Blyth and Newsham were held at this time by the Cramlington family who had come into possession through marriage  to an heiress of the lordly Delaval family, who were the original landholders since the 12th century. A mansion house existed just half a mile inland from Link House on the site which is now Newsham North Farm. It had been occupied by the knightly Ogle and Cramlington families but by 1720 was described as "something ruinous".

The Newsham and South Blyth estate was sold for reasons of  "Cramlington's impoverishment". It was purchased by Thomas Radcliffe, brother to the Earl of Derwentwater in 1694. George Errington, the owner of Plessey collieries, five miles to the West of Blyth, resided at Newsham mansion for a while.

The Earl of Derwentwater was executed for his part in the Jacobite rising of 1715. His family's lands were sequestered by the Crown. The estate was purchased in 1723, from the Commissioners of Forfeited Estates, by Matthew White of Newcastle and his son-in-law Richard Ridley of Blagdon. They were successful coal merchants, but have been held up as a good example of the social transition to the landed gentry and then country aristocracy. They were already rich men and invested heavily in the industrial development of Blyth. The Ridleys were awarded titles and developed a country estate at nearby Blagdon. In the opinion of the Blyth Post's "Story of Blyth (1957)" this laid "the foundations of modern Blyth".

According to Sullivan in "Blyth in the Eighteenth Century" and the Bamburgh Research Project report Link House seems to have had an unusual pattern of ownership, being in the hands of Matthew Robinson who left his estate to Richard Ridley in 1748. Richard was not in the main line of the White-Ridley family. By 1785 Link House was owned by Nicholas Ridley the brother of the 2nd Baronet Ridley of the main landholding line. Some further interrogation of the will of Matthew Robinson and other contemporary documents will be necessary to understand what is happening in this instance.

In 1751 the farm house was replaced by a new mansion, built by Nicholas Ridley. It was speculated that the death of the "tenant" had enabled the rebuilding to go ahead. Formal gardens were in place by 1796 and continued in use until 1887. The 2nd edition OS map of the 1890s showed the gardens to have been replaced by an open area. What is not explained is why this high-status dwelling was built in the first place. Did Nicholas Ridley himself reside here in the decades following its construction and not a tenant farmer?

The 1st edition OS map published in the early 1860s shows a pub, the Half Moon Inn, to be on the site and a layout of buildings which are consistent with some of the structures still standing. Most are likely to date from the new build after 1751 as the formal gardens were laid out to avoid these buildings. There is not enough evidence to be sure if the surviving gate pier is from the 18th century manor house or the earlier building. Archaeologists, however, speculated it could be a formal entrance to the garden.

An often quoted advertisement appeared in the Newcastle newspapers in 1744.

At Blyth, a good seaport in Northumberland: Good convenience for carrying on any trade with liberty to build warehouses granaries and other things necessary.

Also a new windmill built with stone and well-accustomed. A firestone quarry for glass-house furnaces. A draw-kiln for burning limestones. Two large sheds for making pan-tiles and stock bricks, with a good seam of clay for that purpose.

Also at Link-house, one mile from Blyth a large New Malting, well supplied with water.


The well was still in existence by the time of the 1st edition OS map of c1860.

Six farms occupied the lands of South Blyth and Newsham when Ridley purchased in 1723. He also purchased the coal mines at Plessey which came complete with a five-and-a-half mile wagonway to staiths and a quay at Blyth. This followed the course that Plessey Road now takes to the present quayside at Blyth. The population was scanty, consisting of the farmers, their labourers, a few fishermen and associated families. 58,000 tons of coal were being transported along the wagonway annually.

By 1730, according to the Blyth News' "Story of Blyth", Richard and Nicholas Ridley had already established several small industries at Blyth including fourteen salt pans, a brick and tile works, a brewery and pubs (Star and Garter), quarries and supplied the district surrounding Blyth to a twelve mile radius with hops and timber. When the advert was printed in the local newspapers the Ridley's main business was still coal but an increase of coal duties in 1743 may be the reason for the promotion of other industries in Blyth: so they could sell their Plessey coal to them. The first shipbuilding yard was opened in 1750. Only one vessel was registered to a Blyth owner at this time using the harbour, but this activity expanded quickly during the remainder of the 18th century. The population also expanded although housebuilding did not keep pace with this growth and some overcrowding occurred.

In 1751 Ridley built a chapel-of-ease for the residents of Blyth. The parish church was at Earsdon, several miles away and a difficult journey on the inadequate roads of the time. Ridley had the right to appoint the vicar to this church, which stood on the site of what is now St Cuthbert's church hall. The Rev Robert Greenwood is listed in trade directories from the 1820s and 1830s as being the tenant of Link House. He ran an academy from the dwelling.

Around 1900 a tenant farmer resided at Link house. He was clearly a tenant of high status as he is frequently mentioned in the local newspaper, The Morpeth Herald. He was considered newsworthy enough for the Morpeth Herald to devote column space on reporting his illness which eventually led to his death. There is a wealth of documentary evidence listing tenant farmers throughout the life of the estate, too many to list here.


The main three-storey house was  demolished in the 1960s. It was maybe not what we would understand to be a mansion today, but it certainly seems to have been high status. The still standing buildings are more fully described in the Bamburgh Project report. http://archaeologydataservice.ac.uk/archiveDS/archiveDownload?t=arch-423-1/dissemination/pdf/bamburgh1-60199_1.pdf