Burradon was a mere farming settlement until the sinking of a coal mine in 1820. The pit village that Burradon is commonly identified as being developed after this date and was a separate entity from the ancient farm community roughly half a mile away from the mine shaft. 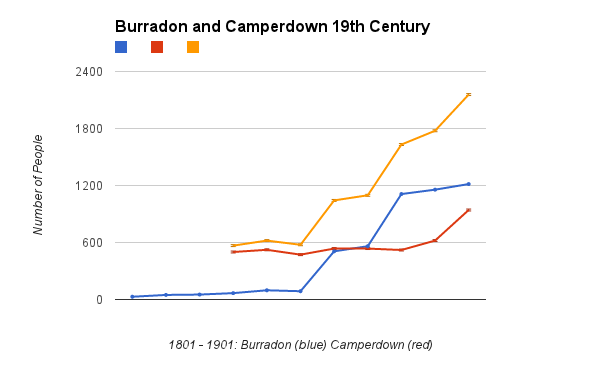 Even by 1821 only fifty-two persons resided at Burradon Farm in nine dwellings. This had probably been the approximate population number for some time. In the 1660s the hearth tax returns showed five households existing at Burradon. 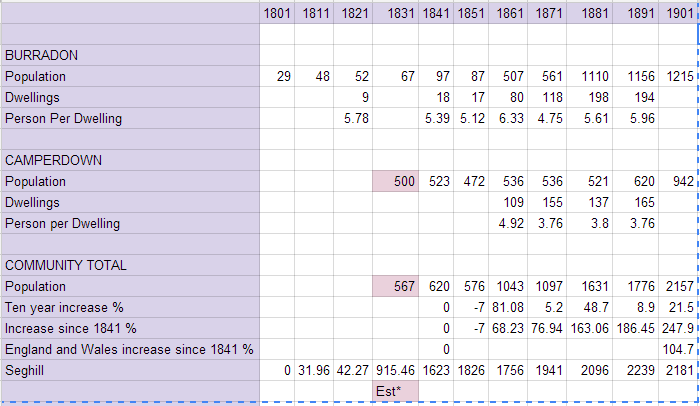 During the decade following the sinking of the pit a small row of nine or ten cottages was built beside the colliery named Pit Row. This was a usual practice, and although there is no direct evidence, they were most likely built by the colliery owners to house the sinkers, who were the elite of the colliery workforce. A similar situation existed at the Isabella Colliery in Blyth. This opened in 1848 and even by 1851 only a small row of four cottages existed here housing entirely sinkers and their families. Sinkers were usually self-employed contractors, who moved on to different collieries when the task of shaft sinking had ended, thereby freeing up the housing. By the 1850s this housing was occupied by the workforce involved in the maintenance of the pit.

A new settlement was formed in the 1820s a few hundred yards from the colliery. This was eventually to be what we now call Camperdown. This was in the parish of Longbenton, whereas Burradon was in the parish of Earsdon. Presumably the land tenure was more favourable over the other side of the parish boundary. However the Camperdown housing of Lane Row and West Row existed to house the workforce of Burradon Colliery. This was first shown on Greenwood’s map of 1828. There were slightly over one hundred dwellings housing around five hundred people. Despite the parish boundaries and different settlement names Burradon and Camperdown formed one pit village community.


The transfer of ownership of the colliery from the Grand Allies to the Carr family, and the sinking of a new shaft in 1837 to overcome major geological faults, had little effect on population levels until 1861. In 1859 colliery ownership had been purchased by Joshua Bower of Leeds. The population rose dramatically by 81% during the ten-year period from 1851 to 1861 which reflected the increased output of the colliery and in the building of the pit cottages of Office Row in Burradon, parish of Earsdon. (Very little further expansion of Camperdown was to occur until the 1930s.)

In fact, this rapid expansion of mining activity was not accompanied by the same development of safety measures which was thought to be a major factor in the colliery explosion of March 1860 which killed seventy-six. The 1861 census returns show a large number of households consisting of a significant number of lodgers - often three of four to a cottage. These were the households of families who had lost the main wage-earners to the disaster. Widows were put in a position of having to house the influx of miners - usually young, unmarried men - that had been newly employed at the colliery to replace those men lost in the disaster. A greater degree of overcrowding was also occurring at 6.33 persons per dwelling. Typically the figure was around 5 persons per dwelling. And the figure is typically lower in Camperdown than Burradon for reasons that are unclear at present.

Further development of the colliery continued to occur during the latter half of the 19th century. In 1871 Nathanial Lambert purchased Burradon Colliery by auction. He, along with his partners, lived and had financial interests in the Killingworth district. They also owned the Coxlodge colliery and from this time forward their company was known as the Burradon and Coxlodge Coal Company. They traded up until the time of nationalisation in the mid-20th century. Almost immediately following the colliery purchase new housing was constructed of North, Middle, Double and Quality Row. Fryer’s Terrace had been constructed by a private developer in 1861.

The population increase of 248% between 1841 and 1901 was typical of the creation and development of a colliery village in the North-East area, being more than twice the increase of England and Wales, or Northumberland, as a whole.