It came to my attention recently that 18th June 2015 will be the 200th anniversary of the Battle of Waterloo. Many streets and districts were named in commemoration of the Anglo-allied victory. Which made me think: When was Waterloo Road in Blyth created, how did it look when it was first built and what is the history of its development since then.

Having looked at 19th century maps of the town of Blyth in the past I knew that the area which is now Waterloo Road and the Market Place was known as Waterloo Place. Early trade directories label it as a suburb of Blyth. Waterloo Place was actually in the district of Cowpen which was separated from Blyth by a tributary of the River Blyth known locally as the Gut. Waterloo Bridge joined the two districts. During the latter part of the 19th century the gut was filled in and building development took place. The Waterloo district had always been known as part of Blyth, with Cowpen being centred on the settlement about one mile away. In fact Cowpen was an unusually large district (township). Historians believe that in medieval times Cowpen was two separate townships that merged, one being called Aynewick. Waterloo and Blyth were formally merged in 1907. Waterloo was mentioned in the Parson and White trade directory of 1827 as being a "newly-built suburb". Waterloo Road was formally named in the 1880s.


The eastern part of Cowpen (or Aynewick) that Waterloo was developed upon was a holding of a branch of the Delaval family. In the 16th-17th century they resided at a large hall just opposite the where the Windmill Pub now stands on Cowpen Road. The holding passed through marriage in the female line to the family of Wanley-Bowes. Landholder, Margaret Wanley-Bowes, died unmarried and intestate. Her two sisters, Anne and Elizabeth, inherited the lands. Anne married Lt. Col. Thomas Thoroton, of the Coldstream Guards, in 1784. Elizabeth married Rev. Robert Croft in 1779. Both families resided at York.

The families obtained an act of Parliament (Thoroton and Croft Estate Act) in 1784 which enabled them to develop in the district. Expansion could begin and it was rapid. Before this the land was sandy, barren and largely uncultivated. Cowpen colliery was sunk in 1794 and the suburb of Crofton came into being. Building developed more rapidly on the Cowpen side of what we now regard as the town of Blyth due to better tenure conditions. This was extended even further with the passing of the Thoroton and Croft Act 1856. The Thoroton and Croft trustees were able to make sales and grant-building leases of 999 years and the freehold and quasi-freehold tenure was preferable to the leasehold system which was in place until the late 19th century on Lord Ridley's lands in Blyth.


Old maps of the area show a westward and northerly expansion of Waterloo during the 19th century. A market square is shown after the 1860s. A hall and theatre were also built on the site. The commercial centre of Blyth migrated westward into Waterloo Place as the 19th century progressed. But the 1827 Parson and White directory and the 1834 Pigot directory list very little commercial activity in Waterloo. Most of the inhabitants listed were well-to-do or minor gentry, eg Thomas Harrison gent, shipowners, tide surveyor, harbour master etc. It was mostly a residential area. A "Waterloo" pub existed at this stage and another "Waterloo Wellington" pub, although its exact location in Blyth is not given. This no longer exists.

The building plots are of a regular size. A 1:500 scale town plan of 1861 shows similar sized houses and gardens. From what can be inferred  looking at the plan the gardens look to be quite ornamental. There are two pubs in the street though. These were not necessarily custom-built pubs, but houses converted since the first construction of the street.

A fire occurred in Waterloo Road in October 1904 and three substantial properties were completely destroyed. Many photographs exist from this period.  The destroyed properties, and from what can be seen the surrounding properties too, were three-storey buildings. They were rebuilt to be very similar to what had existed and these properties still stand today largely unaltered. 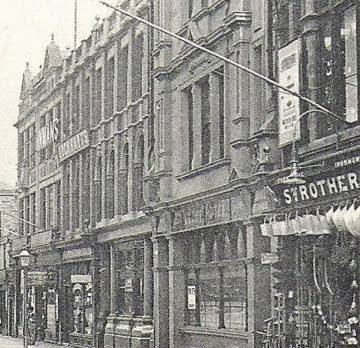 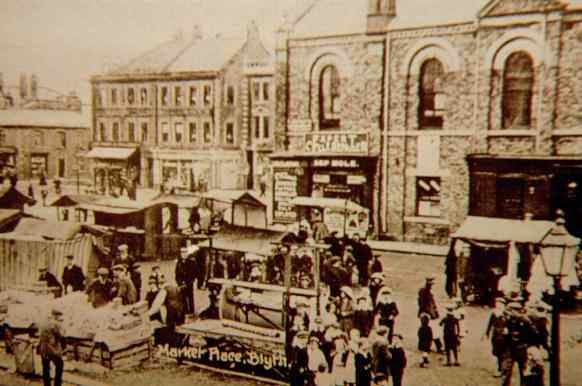 What the evidence so far gathered has not shown, however, is if the three-storey buildings were original from the first building phase of Waterloo, or if they were built at a later date in the 19th century to satisfy the growing commercial need. By the time of the 1861 town plan Waterloo had expanded westwards. A building with a larger footprint is shown as part of this new phase of development called Waterloo Villa. A guess at this stage could be that it was a vicarage for the many churches springing up in the area.

A look along Waterloo Road today reveals mostly modern buildings apart from the small section that was rebuilt in 1904 and a stone-built property, now the Heron's food shop. This existed pre-1904, but is it likely it was built as early as the 1820s? However, a row of much smaller properties still exist which are constructed in brick. The bricks used are similar to that of other streets of housing in Blyth, Wesleydale Terrace and Bath Terrace, which we know were constructed around the early 19th century. Could this be how Waterloo looked in the very early period, assuming that the housing was uniform. A painting from 1870 looking over the Gut towards the Market Place and the now re-developed area of Havelock Square, at the east end of Waterloo, also shows housing of a similar style.

The building that stands on the site of Waterloo Villa, if the modern façade is stripped away also looks if it could be of some antiquity and could be original.


These are some early findings. A more detailed "putting together of the jigsaw pieces" from town plans, directories and photos will hopefully reveal the individual development of each plot. A look through the newspapers of October 1904 may also be worthwhile, as they may have detailed descriptions of the properties affected.

Further reading: http://www.blythmarket.co.uk/index.php/history/ and this on the theatres of Blyth is also relevant http://northumberlandpast.blogspot.co.uk/2013/11/cinemas-and-theatres-of-blyth.html

UPDATE 10th June 1014:
The Shields Gazette reported on the 17th October 1904 of a most "disastrous fire" at Waterloo Road. It had started shortly before midnight on the previous Saturday. The properties destroyed were  "representative of the most superior architecturally in the district." Twelve premises in total were extensively damaged or destroyed including a musical instrument shop and two pubs. The cost of the damage was estimated at between £30k-40k (£3-4 million in 2012)

Fire had broken out in the shop of Mr Lindly who was at the time holding a waxworks exhibition. Flames had spread alarmingly. The Blyth fire engine was quickly on the scene but the single hose could do little to stop the inferno. Besides, the hose kept breaking down and needed repairs. A family was heroically rescued from an upper floor by PC Moody with only a wet handkerchief around his mouth for protection. The police had a busy night as there was much looting taking place and efforts to stop the population from engaging in such disorder was met with abuse and a lack of co-operation.

The Morpeth Herald reported on the 29th October of another serious fire at Turner Street. This time £5000 worth of damage was caused to three premises. And, once again, looters were trying their luck.

Only three people were eventually charged with looting. William Clough was given a sentence of one month hard labour for the theft of a large clock from the White Swan Hotel. John Mather, a miner, was handed fourteen days imprisonment with hard labour for stealing a picture and Elizabeth Fitchford was ordered to repay 10s she had stolen from the White Swan with associated costs.

Blyth and Cowpen councils met jointly as a matter of urgency in the weeks following the fires. They praised Blyth Fire Brigade for the fast response and heroic efforts, but the hose and engine had been poorly maintained. The provision of an adequate water supply was also discussed at length. New measures and provisions were proposed to provide better protection to the people of Blyth
Posted by Alan Fryer at 11:14