The Northumberland County History states that on Saturday 20th December 1292 King Edward I of England, the legendary Longshanks, stayed at Horton, which is now in the parish of Blyth, for one night. He was returning South from adjudicating the claim to the Scottish throne. 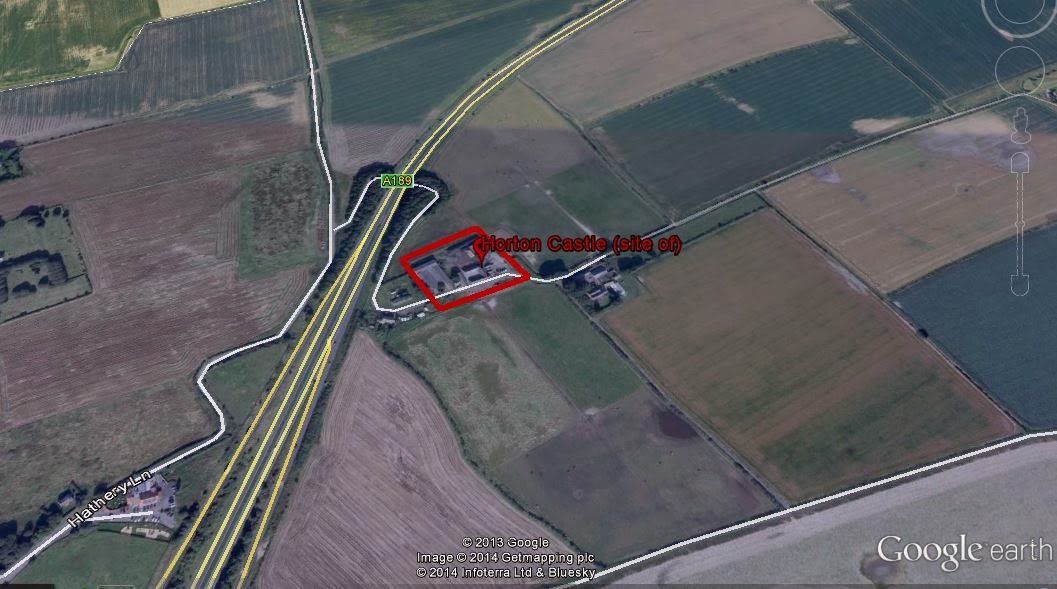 The monarch and his court were widely travelled at this time. They took the justice and administration to the people rather than there being a static location as nowadays. So, it was the usual practice for the monarch to stay as a guest of his well-to-do subjects as he travelled around. But wouldn't we have expected Edward I to have stayed in only the largest and grandest of residences of his barons,for example at Warkworth. Whereabouts in Horton did he stay and why?

The sites and monuments record at www.keystothepast.info website and the County History state that a castle stood on the site of what is now out-buildings of Low Horton Farm. It was demolished in 1809 and all that survives now is a slight hollow where the moat was.

In fact, the landholder, Sir Guiscard de Charron, had used the occasion of Edwards's visit to ask for the necessary permission to fortify his manor house, that Edward was currently a guest in. The license to crenelate was granted one week later in Newcastle. It was only after this date that the term castle could be used for the structure. The County History of Northumberland gives a further insight into the castle's construction:


...fortification seems to have proceeded intermittently for the next six years, for as late as June 5th, 1297, Charron granted to one of his tenants a selion of his demesne in exchange for a selion lying nearer to the moat of the manor-house which, it may be inferred, was then in the course of construction. This moat, which was possibly innermost of two ditches and separated from the outer moat by an earthen rampart," still exists and contains an area measuring 190 feet by 203 feet ; but no trace remains of the fortress that once stood within it. The old building was finally dismantled in 1809, and, though some portion of it remained twenty years later, that too has vanished, nor can any architectural fragment be discovered except a single arch-stone, which is of fourteenth rather than of thirteenth century date. As an example of the true type of "pele'' or fortified enclosure, its destruction is to be regretted.

Charron did not long survive the completion of his castle. It is uncertain whether he was still alive when Edward I. again visited the place, on June 27th, 1301, or when, after the capture of Stirling had seemed to secure Scotland for the English crown, the king was for a third time entertained at Horton in 1304. Upon this last occasion Edward I was, in all probability, accompanied by the queen, and made a week's stay (August 31st or September 1st to September 6th), before proceeding to Tynemouth priory. 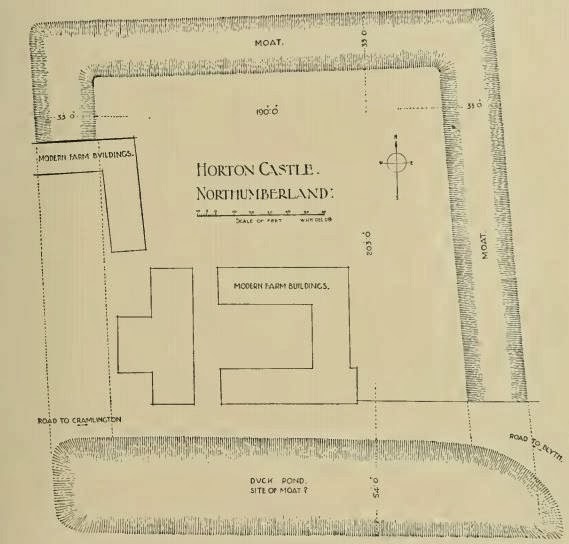 Hostilities between England and Scotland broke out in 1296 and would continue intermittently for the next 300 years. A fortified dwelling was a prudent measure so close to the border. Charron was close to the major political figures of the time and could probably foresee the need to live in a defensible structure, although it would have carried a certain amount of status too.

The footprint of the castle, from mapping and aerial photos, was comparable to Etal castle in the very north of the county, although slightly smaller. The castle could have fitted into Warkworth castle about four to five times.

Sir Guiscard de Charron held the township of Horton from 1269 when he married Isabella de Castre who was the widow of the previous landholder Thomas de Castre. Charron was at the time Sheriff of the County of Northumberland. The assize rolls suggest he was made Sheriff in 1266.

He was related to the king. Throughout the course of his career he was given a number of commissions, each one deploying him further North, which he carried out loyally and competently. He was highly regarded and rewarded. He came into possession of a major estate in Yorkshire before taking up residence at Horton. He had been a travelling Royal Justice between 1281 and 1292.

Charron bought out the various freeholders which put him in possession of the whole township except for the religious community lands. It is thought that a village existed on the site of what is now High Horton Farm which is roughly 500 metres away from the castle. Not much has been recorded as regards to the management of the estate at this period, but on the 1296 lay subsidy document six tenants are listed for taxation purposes.


The castle passed through a number of ownerships: the Monbouchers and Harbottles being notable names. The manor was then purchased by the Delaval family. The castle was last occupied by two sisters of Admiral George Delaval,  who died in 1723.