Driving west along Woodhorn Road heading towards Ashington, with the landmark feature of the Woodhorn Colliery Museum winding gear in view to the right, "The Castle" pubic house stands out breaking the monotony of endless streets of terraced housing. One of these rows of houses is named Castle Terrace. 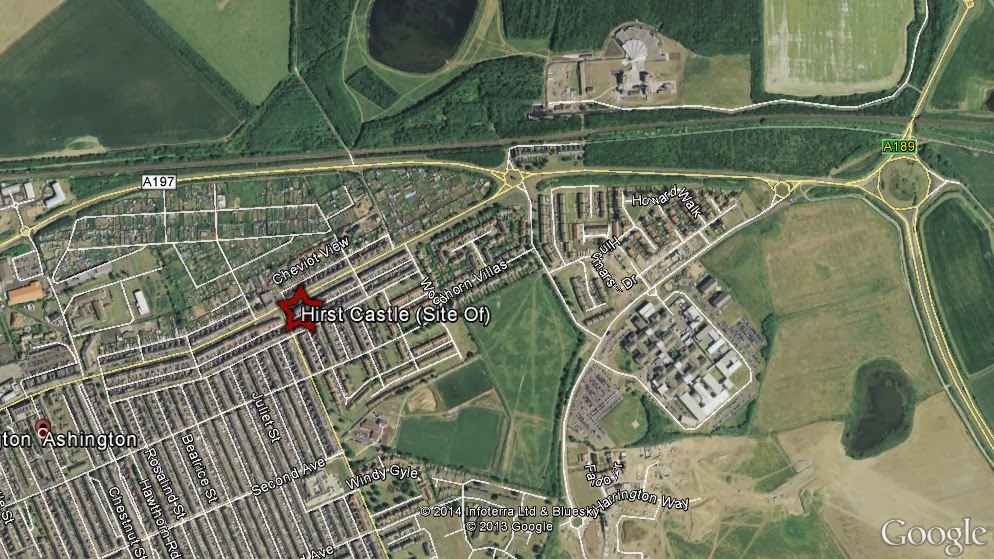 Maps from the 18th to the late 19th century do show a castle as having existed in this area, which is the former township of Hirst in the parish of Woodhorn. The name Hirst still lives on in street names, and other topographical features, as a suburb of the town of Ashington. Whellan's trade directory of 1854 describes Hirst as a hamlet with only 43 inhabitants enumerated on the 1851 census.

So... how large was the castle? Who owned and occupied it and did anything of note occur here?

A gazetteer of defensible buildings at www.northofthetyne.co.uk suggests that the castle was, in fact, a tower, and that: "Old documents suggest that it was built by Ralph, the third Lord Ogle in the late C15 or early C16. A manor house next to it is thought to have been built by Thomas Errington in C17." It was demolished in 1916. The website also displays a photo of the building taken in 1908. This was a plain, but strong house, with a turreted projection to its east side.


The area is covered by the 19th century historian John Hodgson-Hinde in his "History of Northumberland" volumes. He lists documentary evidence which mentions Ralph Ogle, Lord of Bothal, which was the neighbouring township, acquired lands in Hirst from Edward Riddell during the reign of  Henry VIII (1491-1547). The tenant was John Ogle, whom we can assume was a kinsman of Lord Ogle. In 1513 Robert, Lord Ogle, the son of Ralph, granted the lands to his mother and on her death the lands were to be held by his brother William and his heirs. William came into full possession of the estate on the death of his brother Robert. The year is not stated, but Hirst Castle is mentioned as is the tenant, George Ogle, presumably another kinsman. In 1552 George Ogle is listed as a commissioner for the enclosure of the Middle March. We can conjecture from this information that the Ogles came into possession of Hirst township, or part of it at least, in the last decade of the 15th century or the first decade of the 16th century. A castle was in existence by 1552, but Robert Ogle had probably built the defensible dwelling for his mother to occupy on the death of his father during or before 1513.

Hodgson-Hinde does not mention any further evidence of the ownership of the estate until 1628 when William Errington of Hirst is listed as a freeholder of the county and again in 1663. Whether the transfer of ownership is by inheritance in the female line, or by sale is not stated. By 1854 the Duke of Portland was the landholder. He was a descendant of the Ogles.

The Errington family must have come into possession of Hirst castle at some before 1596. On the 29th of November of this year George Errington of Hirst was executed at York. He was convicted of treason and died by being hanged, drawn and quartered. He was considered to be part of the Uprising of the North taking place at the time. But specifically for having tried to convert a protestant priest to Catholicism. He was later honoured as a martyr by the Roman Catholic church. George Errington was originally from the minor gentry branch of Erringtons of Bingfield, St John Lee in Northumberland.

The footprint the castle occupied, from mapping evidence, was not large and another piece of evidence that has already been mentioned referred to the building as a tower. It was clearly not a castle in the sense of a large structure with a curtain wall, for example at Warkworth. But it was clearly thought of as a defensible building. Incorporating defence, where affordable, remained a "wise provision" according to Peter Ryder in Pevsner's "Buildings of England: Northumberland" volume. The 16th century was a time of lawlessness across the border area and of sporadic fighting with the Scots. Towers became fashionable in South East Northumberland from the mid 14th century onwards. They were the dwellings of the minor gentry and often referred to as pele towers. However there were many classifications of defensible buildings and the fashion for their construction changed over time and particular region of the Border area.

Some towers were part of a larger establishment. Some stood alone. Others were adapted over time with a more habitable wing being added to the tower in more peaceful times after the Union of the Crowns in the early 17th century. Ryder states that towards the end of the 16th century towers were becoming unfashionable. Stronghouses were being built in their place. He mentions Hirst "Tower" in this category. But the 1908 photograph shows what can only be described as a stronghouse with a small turret attached to the end of the structure. The building was erected in the early 16th century when Towers were the fashion, however. So, was it the case that it was originally constructed as a tower and later rebuilt as a stronghouse, with possibly many adaptations over time, or was it always just a "stronghouse"?
Posted by Alan Fryer at 11:12