Cinemas and Theatres of Blyth

Local newspapers have recently reported on the, soon to happen, re-opening of the old Wallaw cinema in Blyth as a JD Wetherspoon's pub. The cinema has stood empty since 2004 and it's new lease of life has been welcomed by most of Blyth's residents. The cinema is regarded as a local treasure. The art-deco style it was furnished in made it worthy of a grade II listing by English Heritage.

The Newcastle Journal newspaper reported the purchase of the cinema by Wetherspoons on the 29th August 2012. The writer of the article gave a brief history of the Wallaw cinema, which was also, on occasions, used as a theatre, and the development of other cinemas and places of entertainment.

The article was mostly based on the information given by English Heritage on their listings database. This describes in detail the cinema's well-loved art-deco architecture. But I was mostly interested in the history of the cinema. This is what the listing reports:

This building, which opened as a cinema in 1937, was designed by Percy Hedley Browne, Son and Harding of Newcastle upon Tyne and the job architect is believed to be Charles Alfred Harding. Research has shown that this firm and its forebears were a leading and prolific cinema practice in the north east of England. The plasterwork was by Webster Davison and Co Ltd. of Sunderland and the streamlined Moderne light fixtures are by Devereux Moody and Co Ltd of Newcastle. During the 1980s the rear of the stalls was subdivided to form two separate small auditoria. The cinema closed in 2004 with a final showing of Mel Gibson's 'The Passion of the Christ', and has remained empty since that time. The practice established by Percy Lindsay Browne in 1911 was one of the most prolific designers of cinemas to be found in the north east, and this is understood to be their best surviving work. http://list.english-heritage.org.uk/resultsingle.aspx?uid=1031569

The name "Wallaw" came from parts of the name of its owner Walter Lawson.

English Heritage listing information was based on the research done by Richard Gray as published in his book "Cinemas in Britain: A History of Cinema Architecture". The advertising blurb to this book states:


The earliest cinemas were little more than shop conversions or basic rectangular rooms. However, as popularity of film-going grew in the World War I period, and later with the arrival of 'talkies' from Hollywood in 1928, there was a great surge of new building, and cinemas became more complex in style. These movie palaces of the 1920s and 1930s, the heyday of cinema, could seat as many as 4000 people, and often featured fantasy interiors, styled after Egyptian temples or Gothic cathedrals. With the arrival of television in the late 1940s, cinema audiences dwindled, and a new type of building with several, smaller auditoria became necessary.
The recent resurgence in the popularity of film-going has caused not only the arrival of the 'multiplex' but also, more importantly, increasing recognition of the importance of the movie palaces of the halcyon days of cinema. This has so far led to around 120 cinemas in Britain receiving listed status, thus preserving them for future generations.

The Newcastle Journal reporter also mentioned in his piece this on the earlier development of Blyth theatres and cinemas:


The cinema stands on the site of the Blyth Hippodrome, built in 1902 by circus proprietor William Tudor. William and his wife Edith were part of the show, with an act that included ponies purchased from the Seaton Delaval Coal Company.
The Hippodrome closed in 1920, when Tudor converted the skating rink in Post Office Square into the second Hippodrome.
It was later rebuilt as the Roxy Cinema and Ballroom and is now a bingo hall. William Tudor was also the man who brought moving pictures to Blyth.

A quick search of the internet established that Walter Lawson had built a chain of cinemas in the south-east of the county. There were Wallaw cinemas in Ashington, Newbiggin and Bedlington Station. They ended their days in the 1960s and 70s. A forum poster on www.Bedlington.co.uk left this information on the Bedlington Station cinema :

It was built in 1896 as the Palace Theatre . Converted to a cinema by Walter Lawson in the 1930's. It closed in August 1966 after showing Emile and the detectives. In April 1968 it opened again as the Club Domino. 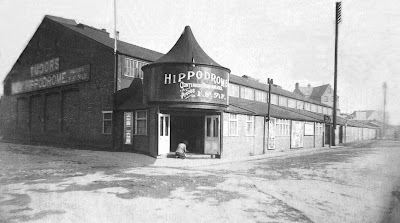 And apart from that very little published information can easily be found about Walter Lawson, although the local newspapers during the 1940s frequently mentioned his name as having let his cinemas be used at no charge for benefit concerts in aid of the Spitfire fund.

The theatre history website www.arthurlloyd.co.uk mentioned that Richard Fynes opened a theatre at Blyth in 1870. Fynes was a character I have been familiar with for many years. I often pass the large monument in Cowpen cemetery which was erected in his memory by friends and colleagues and paid for by subscription. He published a book in 1873 entitled "The Miners of Northumberland and Durham". This has been well used and studied by local historians, myself included. Fynes started his career as a lowly pitman, but his intelligence and character put him at the forefront of representing the workers interests against the coalowners. He was also one of the leading figures in establishing a miner's union, provident societies and co-operative societies in the area. This eventually led to him being blacklisted by all the colliery owners.

Joyce Wakenshaw gave a presentation to the Blyth History Society in November 1993 about the "Life of Richard Fynes". Her information had mostly been obtained from newspaper obituaries written about Richard in 1893.[ Transcript of talk to Blyth Local History Society on Richard Fynes ] It was around 1861, when he was dismissed from his position as a pitman, that he bought a horse and cart and with great perseverance, and the experience no doubt gained in being a pioneer of the local co-operative society, he started trading in the local colliery villages. By 1862 he had purchased a shop in Blyth and was trading as a general dealer. Richard still campaigned on behalf of the miners and was at one stage considered as a Parliamentary candidate. His entry into the world of being a theatre owner does not seemed to have been planned, however. Joyce Wakenshaw writes:

[Fynes] seized an opportunity, bought the Octagon Chapel in 1865, and developed it into sale rooms. Here by all accounts, he charmed his customers into purchasing goods, by making them laugh with his humorous stories and sales banter. Gradually, because Richard liked nothing better than a "good do", he allowed his premises to be used for various meetings and concerts, to raise funds for social causes. He enjoyed entertaining himself, he played the piano, but best of all he liked playing on his mouth organ, which he carried around always. So quite naturally, the salesrooms took on the flavour of a place of entertainment. One article I read stated that before the development of the Octagon Chapel into a music hall, entertainment in Blyth had been confined to exhibitions in one or two booths in the market place. 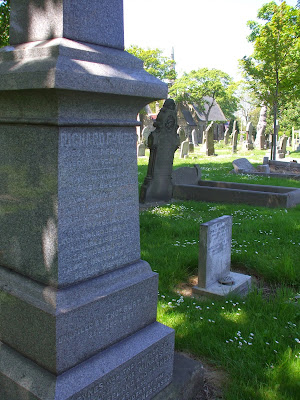 The Octagon Chapel stood in Waterloo Road in Blyth and the transformation into a music hall, The Theatre Royal, was a gradual one, and not without opposition from religious groups. Fynes invested in the theatre and by 1875 it was described as one of the largest and most commodious in the region. It could accommodate an audience of 2500. Apart from a slight downturn during the recession of the late 1870s all went well for the fortunes of the theatre until 1888. In February of that year a fire broke out in the cinema which completely destroyed the building and Fynes' dwelling house, which stood next door.

The residents of Blyth must have had an enormous amount of sympathy and respect for Richard Fynes as a subscription fund was raised which allowed him to trade his wares again and in 1889 re-open a new theatre on the site. However, he was now only the manager of the theatre. Joyce Wakenshaw elaborates:


The opening performance was to be a benefit evening for Richard Fynes. One year after the fire, we learn from the columns of "Blyth Weekly News", "Through the energy of Mr. Fynes, we shall have English Grand Opera in Blyth for the first time, Bohemian Girl, Il Travatore, Faust etc.", But then, two weeks later, in the same newspaper we learn that, "The familiar name of Richard Fynes is so closely associated and interwoven with the dramatic life of Blyth, that when our readers hear that the Theatre Royal has been sold to a company, they may well wonder if something has not been taken away from the drama of Blyth." Richard Fynes became the Manager of his own theatre, which had been bought by a company; most probably this was the only way he could stay solvent.

The theatre was purchased by Arthur Jefferson, who was the father of Stan Laurel. In 1900 he built a new Theatre Royal on the corner of Jefferson Street and Trotter Street. The theatre was demolished in 1983 and part of the Keel Row car park now occupies the site. Arthur Stanley Jefferson, better known today as Stan Laurel, worked there as call-boy, then a bit player, in his early days.


At a later stage Blyth also boasted of The Roxy, The Essoldo and the Central cinemas being present in the town. The Essoldo chain of cinemas was founded by Solomon Sheckman who was born in 1893 at North Shields. He came from humble beginnings but at the height of his career owned 196 cinemas and halls. He acquired the Theatre Royal in the 1930s and later the nearby Roxy, which also had a ballroom attached to the cinema. He also purchased the Empire on Beaconsfield Street and used the site to construct a new cinema called the Essoldo. He invested considerable sums into these properties. The Roxy especially looked spectacular and inviting, illuminated by large neon signs.

A bingo hall is now at this site adjacent to the bus station. The Central cinema was on the site of the Market place and was demolished in 1974.