When looking at old mapping of the South East of the county a prominent feature that stands out to me is Lady Chapel.

This is on the north bank of the River Wansbeck about one-and-a-half miles east of Morpeth and the same distance west of Bothal. It is marked on most of the early cartographic surveys from Speed's map of 1610 through to the present-day Ordnance Survey mapping. In 1610 Speed labels the feature as New Chapel and uses an icon to indicate a settlement at the location, but even by the time Armstrong surveyed the county in 1769 the chapel was "in ruins".


The reason it stands out so clearly is that it resides alone in such a remote location. It is a difficult and lengthy walk to the nearest settlement, which made me question was the chapel once part of a small monastic community, or did it serve a once-important deserted medieval settlement, or did it have another function which justified its existence?

A site visit was obviously desirable. Parking up at Bothal Mill I walked for one mile on the footpath running alongside the River Wansbeck. It is a very picturesque and pleasant walk and interpretation boards along he route describe the various features and wildlife that can be encountered here.

The site can be easily missed. Not much appears to be left of the feature until a closer inspection is made. The first indication that I had arrived at the site was an inscribed stone marked "1887 Jubilee Well" with some scattered stones and a column that was at one time part of the structure. Close by is the first 2-3 courses of a tiny rectangular building (21 x 12 ft). Stone blocks lie in piles beside this ruinous building, evidence of the most recent decay and damage to the structure. It was, however, clearly the chapel that I had been searching for. 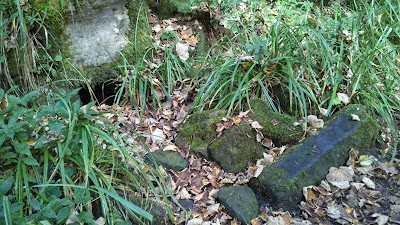 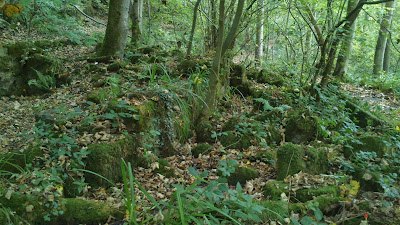 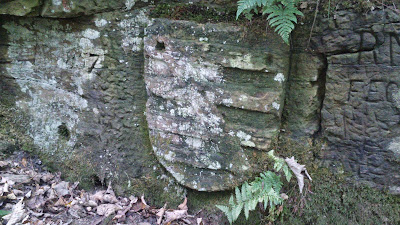 There is evidence of quarrying in numerous places along the riverbank. These small quarries are very likely the source of the raw material for the construction of the chapel. One quarry face only a few metres from the site of the chapel is most interesting. It has various Latin inscriptions and a much-weathered coat of arms engraved into it.

Various walking guides and a geocaching site on the internet suggested this chapel, and later 19th century features, were associated with the Bothal estate and the Ogle family, who were landholders here during medieval and early-modern times. However, they did not cite their sources. I suspected that the information was derived from the definitive "Bothal Observed" written by Roland Bibby and published in 1973. I obtained a copy to see what had been written about the site.

The village of Bothal is now somewhat off the beaten track and not well known. In medieval times, however, it was the centre of an important baronial estate. The grand castle, which was the residence and status symbol of the lords of the manor, still exists, as does an elegant parish church.

In "Bothal Observed"  Bibby gives evidence to support his theory that Lady Chapel, which would have been a colloquial version of "Chapel of our Lady", was, in fact, a chantry. A chapel can be a dedicated room within a building for the purpose of worship, a separate building which is subsidiary to the main parish church, or the place of worship for a non-conformist denomination. The online Catholic Encyclopedia had this description of a chantry, which matches the criteria for Lady Chapel being a chantry:


These differ from other interior chapels only in being erected and endowed for the celebration of Masses of requiem, in perpetuity, for some individual soul, generally that of the founder himself. Special priests were usually appointed to serve them, and were called "chantrypriests". It was not until the thirteenth century that such chapels became common, and by that time, most of the available space in the churches had been already occupied, hence we find chantry chapels stowed away in corners and odd places. Being intended for private, not public, Masses, they were frequently smaller than other chapels.

The evidence for the founding of the chantry comes from a stone heraldic shield present on the chapel in 1774, when an antiquarian surveyed the structure. Various other antiquarians and historians, during the early 19th century, write of the shield being located in the courtyard of Bothal Castle, obviously removed from the chapel at some stage. It has since been built into the Gatehouse of the castle.

The shield consists of the arms of Ogle and Bertram quartering Kirkby. The Bertrams were the original holders of Bothal, their tenure beginning in the 12th century. During the 15th century Bothal passed into the ownership of the powerful Ogle family, by marriage through the Bertram maternal line. The Ogles base was at Ogle Castle near Ponteland.

It was Robert Ogle IV, 1st Lord Ogle, who married a Kirkby. It was their grandson, Owen Ogle, however, who inherited the Bothal manor when the last of the Bertrams died. This was somewhere between 1472-88. It is his arms that are presumed to be displayed on the heraldic shield. Bibby writes:


... I imagine that the Lady Chapel represents a foundation by Owen Ogle to commemorate his gaining the barony.

This was just an educated guess, of course. It was more usual for the provision of a chantry to be made in a benefactors will. But at present there is no further evidence to date the structure more accurately. Late 15th century will suffice. The architectural features that Bibby describes from 18th century drawings do not contradict a late 15th century construction.  He summarises:


... a simple rectangular building with a gabled, stone roof, a handsome triple window at the east end and behind the altar, a plain south window a south door and a west door...

There was also the possible evidence of buttresses at each end of the south wall.

If the chapel was a chantry then it would have had a short existence, being dissolved under the 1547 Act of Parliament, a continuance of the dissolution of the monastic sites. The building, being so far from habitation, would have been left to decay. However, it was still being described as "New Chapel" by Speed in 1610 and by the botanist Turner in 1549. Bibby thinks that this is another indication of the late foundation of the chapel.

No further evidence seems to exist of the chapel. But here is another mystery? Photographs taken of the site in Victorian times, and by Tomlinson in 1910, show a near complete structure, not in ruins as should be expected. The photos also do not match the structural drawings of the 18th century.


The conclusion was that the chapel had been restored at sometime during the 19th century. The features on the quarry face associated with the site give a clue to this restoration. The heraldic shield carved into the rock is the arms of the Mulcaster family. Also inscribed into the rock are the words RM fecit, AD1857 and Fidelis Servus, which translates as faithful servant, although weathering of the rock has made this slightly illegible and may not be accurate.

This coincides with a Richard Mulcaster becoming curate of Bothal in 1856. Mystery solved! But why did he restore the chapel. Was it just as a folly? No record seems to exist of any use it was put to and with the creep of overgrown vegetation and tree roots the chapel soon started to crumble again.

Mulcaster could also have been involved in the construction of nearby Jubilee Well 1887, which is really a spring, created for the 60th anniversary of Queen Victoria's accession. Photographs show that this was once an elaborate and ornamental structure, featuring the coat of arms of... Mulcaster.