The Earsdon parish register for the 3rd November 1797 recorded the death of William Hempseed, a glassman of Seaton Sluice. The same registers had been recording the baptisms and burials of his eight children since 1764.

Seaton Sluice lies in the very south-east corner of Northumberland. It has a small harbour holding a few pleasure craft and can be described as a sleepy, picturesque coastal village. This was not always the case, however. Seaton Sluice was once the hub of thriving early-industrial activity.

So why was William living at Seaton Sluice? Where had his family originated from? What did a glassman do?


The Royal Hartley Bottleworks was opened at Seaton Sluice in 1763 by the landholders, the entrepreneurial Delaval family. William Hempseed appeared listed as a resident of the area just one year after the opening. It can be presumed he was one of the first employees of the company. The websites of the Seaton Sluice and Old Hartley Local History Society and the records of the archaeological Sites and Monuments index on www.keystothepast.info give useful summaries as to the life and times of the Bottleworks.

Seaton Sluice was ideally situated to be a busy industrial centre. A natural harbour, established sea transport routes and the abundant supplies of sand, kelp, clay and cheap coal were available at this location. All the ingredients needed in the manufacture of glass. In 1764 the Delavals also carried out a major engineering feat in creating an artificial harbour, hewn out of solid rock, and known locally as "The Cut".

Crossing the modern bridge across the Seaton Burn south into Seaton Sluice you will be travelling right through the centre of the Bottleworks site, which was eventually demolished in 1897. Parliamentary permission was obtained for the use of twelve acres for the factory and accompanying village.

Rapid expansion meant that by 1777 the Bottleworks was the largest glass manufactory in England and produced in this year one million seven hundred and forty thousand bottles. Keystothepast.info states on the site there were:


...workers houses, market place and a brewery. A central warehouse was connected to the glass houses by an underground narrow gauge railway, reputed to be the first in the country to run on iron rails and was designed by George Stephenson. Further tunnels connected the glass houses to the river banks for slag tipping. Another tunnel ran from the warehouse to the harbour to transport bottles to ships.

Some of the tunnels still exist, but are rarely visited. They were used as air-raid shelters during the 39-45 war. It would appear that it was a self-sufficient community: most of the provisions needed could be purchased on site. The Delavals also provided a doctor for the workers, and their families', needs being paid for with a deduction from employees' wages. The self-contained community buildings became known by locals as "The City". 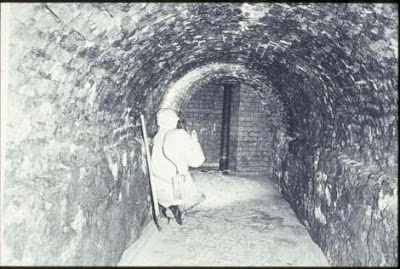 The first glass houses were 70 metres long, 15 metres wide and 11 metres to the roof. As expansion took place these were replaced by three round coned furnaces which were more efficient, and eventually six cones dominated the skyline. For administration purposes each cone was given a name; Gallagan; Bias; Charlotte; Hartley; Waterford and Success.

The large cones of the furnaces were something of a landmark to passing ships.

Glass is produced, at the simplest level, by heating sand and lime, with some other minor chemicals, to a very high temperature until a molten product is obtained. (Hence the furnaces.) This can then be shaped into various products. 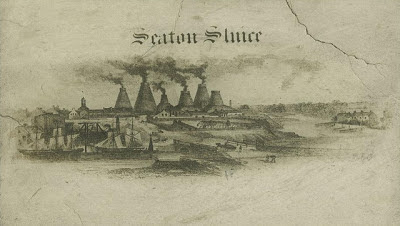 There were various different types of worker employed in the Bottleworks: teizors, calkmen, ash shifters, fluxhown, pot makers, finishers, gatherers, and  blowers. So what was William Hempseed employed to do? The answer is at present I do not know. The Earsdon parish registers simply record him as a glassman.

What is recorded in the archives is that Thomas Delaval, the brother of Sir Francis Blake Delaval, returned from an expedition to Germany in 1763 with skilled glassmakers from Neinburg to teach the Bottleworks' employees their skills. Glassmaking was an established industry in some parts of England, but it was more advanced in our neighbouring european countries. Was William Hempseed given employment in the new venture as a complete novice or did he come with some experience in the glass making trade?

William was aged 55 at his death in 1797 which puts his birth year at around 1741-42. Tracing his life back through the Genealogical indexes we discover he was baptised at All Saints, Newcastle on 28th June 1741. His father's name was James and several entries relating to his family appear in the All Saints' registers during the following two decades. William married Catherine Ledger at Heworth, just a few miles south of Gateshead on the Tyne, on 27th March 1762. This was just prior to the family becoming residents of Seaton Sluice.

The records do not indicate the presence of many people with the surname Hempseed prior to 1741 on Tyneside. It is possible they were migrants. All Saints was at the east end of Newcastle beside the river and incorporated the Sandhill and the Sandgate areas. The latter was one of the poorest in 18th century Newcastle. This was the residence of the Keelman who formed a distinct and colourful community. "They were known as a close-knit group of aggressive, hard-drinking men. John Wesley, after visiting Newcastle, described them as much given to drunkenness and swearing" [Wikipedia]. The keels were vessels of narrow draught that were loaded with coal and then taken downstream to the larger collier boats where the cargo was offloaded to be transported by sea: a skilled operation. The colliers were unable to travel upstream as far as the Newcastle collieries: the river at this time was too shallow. According to the Keelman article on Wikipedia: "By 1700 there were 1,600 keelmen working on the Tyne in 400 keels. Not all were local: there was a significant number of Scottish keelmen who returned home in the winter when trade was slack." According to other sources many of these migrants were from the border area: descendants of the Border Reivers.

In the amount of time available to research this article it has been impossible to establish the exact occupation of the Hempseeds or where they originally came from. The parish records of this period simply do not give enough detail. However, a large grouping of Hempseeds did reside in the Perth area of Scotland in the early 18th century. There was also small-scale glassmaking manufactories established in Newcastle at that time. We have know way of knowing at present if William gained any experience there, however.

It would seem that with these initial investigations the Hempseeds of the early 18th century were unskilled, economic migrants to Northumberland. William took advantage of the new manufacturing technology moving into Seaton Sluice to learn a new trade. His early death at 55 though, could suggest he  was employed in one of the more dangerous and dirty jobs within the factory?