As you will be aware September 9th 2013 is the 500th anniversary of the Battle of Flodden which was staged in North Northumberland, about eight miles from Wooler.


And, you will have remembered that England were having a skirmish with France. The Scots had formed an alliance with France and so felt duty bound to cross the border into England and make a bit of a nuisance of themselves entering our Border castles without being asked. It was very rude of them. Then they camped out on an English hill, thousands of them, setting up guns and stuff facing South, under the leadership of their king James IV.

However, the English king, Henry VIII, had sent the very clever Earl of Surrey northwards with a smaller army to meet the Scots. Well, he didn't play by the rules, the sly old fox, and under cover of hills to the east of Flodden Field slipped round to the north of the battlefield taking the Scots by surprise. The Scots were less disciplined and had more antiquated weaponry than the English. The result was that approximately 10,000 Scots were killed, including the king and most of the nobility. Approximately 4,000 of the English army died. Game, set and match to the English. The battle had a devastating effect on Scotland.

You had remembered all that, of course? Me neither. This is not the most accurate and detailed description of Flodden events, but plenty has already been written on the subject. http://www.flodden1513.com/ would be a good starting point for more information. What the history books often don't cover in as much detail as the battle itself is the aftermath. This is what I wanted to explore. How do you dispose of 14,000 bodies including that of a monarch? What effect did it have on the residents of North Northumberland and how where they involved? 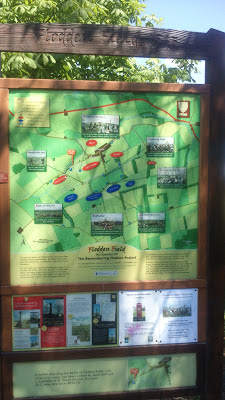 I purchased a guide book, written by Jane Lyell, from St Pauls Church in Branxton, a village only a short distance from the battlefield. She writes that the battle commenced at around 3-4pm and ended when the light faded at around 6.15pm. By this time the Scottish army had "ceased to exist" and King James IV was dead. That night the English camped out on the battlefield they had recently conquered. In the morning light the English started the process of looting the "richly-provided" Scottish camp for food and provisions. English supplies had been very low after their hasty and extended march North. The business of sorting through the dead bodies continued for the rest of the day.

Lord Dacre, the Warden of the English West March, found the body of King James IV, which had been stripped naked by looters. With help from the King's captured chamberlain the body was identified. According to Lyell, the King's body was wrapped in the remains of the Royal Standard and laid in Branxton Church. The church was restored in the mid 19th century but the chancel arch is still extant from the original medieval building. King James was then taken to Berwick for embalming, before being transported to London by horse and cart and buried in an unmarked grave at St Michaels, Cornhill. Or was he?

In April 2013 The Scotsman newspaper  http://www.scotsman.com/news/arts/bid-to-find-body-of-james-iv-at-flodden-1-2884762 carried a story about the Flodden 1513 ecomuseum project which involves a team of volunteers carrying out archaeological digs and searches in the archives relating to the battle. They are hoping to unearth new evidence to further understand the battle and the final whereabouts of King James, which they believe is not necessarily what the history books tell us. The work is ongoing.

The Border area by 1513 was a fairly lawless place. The inhabitants recognised a loyalty to their family surname, similar to the Highland clan system, above loyalty to the monarch and the law of the land. Raiding and stealing was the commonplace method of survival among the people who would be known as Border Reivers. Wardens were appointed on both sides of the English/Scottish border to uphold this unique Border law and try to maintain some kind of order, although sometimes they were actually the worst gangsters in the neighbourhood.

Lord Dacre was one such warden on the English side. His opposite Scottish warden was Lord Home. Both had raised a small fighting force of around 3000 men: followers and borderers. These detachments were the first involved in the battle. They withdrew to allow the infantry battle to take it's course, but when it became apparent that the Scots were suffering huge casualties Lord Home was urged to go to the aid King James' forces. This he refused to do. His motives have been the subject of speculation and debate to this day, but three years' later he was executed for treason. The day following the battle he reappeared on a hill overlooking the battlefield, but was quickly driven away by the English.

The English borderers were not happy with the spoils of war that they had accumulated on the battlefield. True to their reputation they broke from the army and indulged in some reiving, attacking the English camp and wagon train at Barmoor leaving behind them an unrecorded number of dead and injured among the non-combatants of the English force. The Bishop of Durham at the time recorded:

The Borderours did full ill and be falser than the Scottes and have doun more harm at this tyme to our foulkes than the Scottes dyd..... thay nevir lyghtyd from their horses, but when the bataylis was joynyd, they felle to ryfelyng and robbyng aswelle on our syde as the Scottes

The Borderers had put their own selfish interests ahead of the national interest. But without Dacre's men would the battle have been won?

Chivalry and loyalty, if it was ever alive, was not much in existence at Flodden. The Scots who had managed to survive the battlefield were now fleeing for their lives back to the border with English detachments in hot pursuit. However, it is said that they slaughtered "to a man" 500 french mercenaries who had been fighting on the Scottish (their own) side. The English also indiscriminately slaughtered and looted Scottish civilians who had followed the wagon train South and had found themselves on the wrong side of the English lines.

Robert White, writing in 1859, recorded that he had unearthed several human skulls in the churchyard, while laying a new path. Presumably time was taken to bury some of the men in a mass grave in consecrated ground. Were they the more highly-regarded men or just those that had happened to fall near the church at Branxton?

Flodden1513.com suggests that the church was used as temporary mortuary and hospital, although little written evidence exists of this, and of an oral tradition that the bodies of Scots nobles were retrieved from the battlefield and  repatriated by the nuns of Coldstream Abbey, who also tended to the wounded. It also suggests:

...locals, prisoners and the fighting men of the English army would have worked to clean the battlefield, burying the dead but at the same time stripping them of clothes, possessions and of anything valuable.

Very little archaeological work had taken place at Flodden until a few years ago when a team from the BBC "Two Men in a Trench" series carried out a brief investigation. Part of the work done was to excavate on the battlefield hoping to find graves of the combatants. It was expected that remains would be found, but this was not the case, despite quite large trenches having been cut by machine across the site. The location of the mass of the bodies still remains a mystery and any theory as to their disposal inconclusive.

George McDonald Fraser in his book "The Steel Bonnets" writes that the Border Reivers became more active in the period following the battle, because of the instability on the border and the Scots' weakness. The English did not follow up their victory, as was probably expected, with a conquest of Scotland.