Several years ago I was travelling through the North Northumberland village of Norham. It was rather deserted at the time, except for a shadowy figure in a hooped shirt, mask and carrying a sack, scaling a ladder to an upstairs window. I did a double take and nearly crashed the car. Then I realised we were also surrounded by a completely lifeless postman and a policeman. It had a very paganish feel to it like I had just arrived on Summer Isle the fictional setting of the Whicker Man Film. They were scarecrows. Very clever, humourous and well-put-together scarecrows.

So... when I saw an advert for a scarecrow festival at Rennington, near Alnwick, last summer I had to go. I wasn't disappointed. Scarecrows lined the village streets, churchyard and almost all of the residents gardens. They were highly imaginative and often humorous. Money was being raised for good causes. So, was this all part of a centuries-old spooky, rural tradition that a pit village lad like myself really ought not to ask questions about? 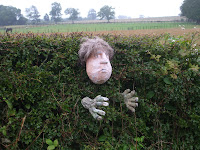 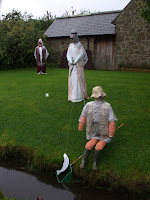 No. Apparently these scarecrow festivals have only been going for about a decade or less. They are an invented or revived tradition. So, were there any ancient traditions left in Northumberland. I turned to the book by Frank Atkinson: "Life and Tradition in Northumberland and Durham" for answers. The village of Whalton, south-west of Morpeth can probably claim top spot for keeping alive traditions. Atkinson reproduces two photographs from Whalton in 1905 depicting the Baal ceremony and a Kern Baby from harvest time. Even today the villagers hold the Baal Fire Ceremony on the 4th July, which provides an excuse for some morris and barn dancing and a few drinks. Tomlinson in his "Comprehensive guide to Northumberland" first published in 1888 writes


...the villagers observed the custom, on the 4th. July (old Midsummer-eve) of kindling on the green a large bonfire, and then dancing around it and leaping through it - a relic of solar worship which has come down uninterrupted from Pagan times.


Readers of the Old Testament are well acquainted with the condemnation passed upon the worship of Baal, but some of them may be surprised to know that there is a custom in Northumberland of lighting Baal fires on St. John's Eve, which is a relic of ancient Baal worship. The identity between the celebration of the pagan rite of old and of the modern remainder is too obvious to be doubted. The ancients passed their children through the fire, and the villagers at Whalton used to jump over and through the flames... Of the Whalton custom a modern writer says:" As midsummer approaches, much wood is marked out for the bonfire, sometimes with the consent  of local farmers. When this has been cut, it is brought into the village with a certain amount of formality. On the evening of the 4th July a cart is borrowed and loaded with branches of faggots, some of the men get into the shafts, more are hooked on by means of long ropes, and then, with a good deal of shouting and horn blowing, the lumbersome vehicle is run down into the village." The same site for the fire is chosen year after year, and it has never been changed. The village turns out en masse to see the bonfire built. The children join hands and dance round the stack of wood and branches until they are tired; youths and maidens also dance a little distance away. At dark a cry is raised: "Light her!" Soon the whole village is illuminated by a huge blaze, and the Baal fire is at its height...


The word 'bale' originated in Northumberland and was used to describe beacon fires lit on castle, pele and hill top to rouse the country when raiders were spied riding over the Border. The Morris dancers come to Whalton to entertain and the children hold hands to dance around the fire; they used to leap through the flames but this tradition has been given up...

Harvest festivals still continue today, of course, but probably not to the same extent as in former times. Once again, Whalton had a strong tradition  in the creation of the Kern Baby.

Hutchinson writing in the 1770s in his History of Northumberland described:


In some places, an Image apparelled in great finery, crowned with flowers, a sheaf of corn placed under her arm, a scycle in her hand, carried out of the village in the morning of the conclusive reaping day, with musick and much clamour of the reapers, into the field, where it stands fixed on a pole all day, and when the reaping is done, is brought home in like manner. This they call the Harvest Queen...

What he was describing was the Kern Baby. Kern is most likely a corruption of Corn. Getting the harvest in successfully was of greater significance in past times than today with our greater use of technology and not so much of the population being engaged in rural activities. The traditions have also become more based in a church environment.

These old traditions and customs are a great way for communities to come together though. It would be nice to think they could continue.
Posted by Alan Fryer at 08:57