Ordnance Survey maps from the 1890s to the 1950s show a curious feature at Seaton Sluice on the links just north of the current Astley Arms. A petrol filling station stood very near this site from the 1960s until just a few years ago. The feature is called Hastings Pit (coal level). Coal level, I subsequently discovered, is a term used in other parts of Britain for a drift mine or horizontal shaft. Curious, I thought, because of its location, the small amount of buildings for a colliery on the site, no surrounding pit village, slag heap and the lack of any obvious transport links. So was it a colliery in its own right? Who owned it? What could I find out about the site in general?

I turned to the Durham Mining Museum website for answers. Hastings Pit is listed as part of the extensive Seaton Delaval Colliery group, which in 1929 became the Hartley Main collieries. Hastings pit was opened in 1875. Its location was listed as OS map co-ordinates NZ299764. Unfortunately, this is not the same as the Hastings Pit location on the Seaton Sluice links. It is, in fact, located further inland at New Hartley. Further examination of the mid 20th century maps revealed a "half drift" mine just inland from Hastings Pit and the similar Avenue mine just south west of Seaton Delaval Hall. Very little information was found to be published about these sites.


None of these smaller pits were shown on any of the major colliery maps of the time. A small set of ruins is all that remains at the Avenue site. A local man has published a collection of photographs on the Flickr sharing website. Two that are featured are of Avenue mine and comments accompanied the postings. The comments mention that the pit was opened in 1932 and was possibly the re-opening of an earlier shaft. The ruinous buildings were once the explosives store. A drift mine nearby was the escape tunnel and an underground roadway joined this colliery to the main Seaton Delaval collieries. A pit canteen existed on the site. No photographs were found, however, of the colliery in operational days.


The Seaton Delaval Colliery company had a good supply of housing for its workforce at the main site and would not need to construct a village around these smaller mines.

The function of these little pits had not yet been established though. Documentary evidence was proving to be scant. However, they would still have been in existence within living memory of many of the older inhabitants of the area. An appeal was put out for information across the social media sites. So far this has not produced any results.

I started then to develop the theory that Hastings Pit at Seaton Sluice was probably connected underground to the main Hastings Pit at Hartley. It would probably serve as an escape route and ventilation for the main colliery. Could the book by former local miner James Tuck "The Collieries of Northumberland" provide any clues to any other functions? He mentioned that the Seaton Delaval colliery group eventually had eight operational shafts, but gave very little individual information on each one.

However, the Ashington Coal Company operated in a similar manner to Seaton Delaval and Tuck recorded:


In 1924 the first drift, the ConeyGarth, was driven at the mine about a mile to the west and close to the site of the original "Fell 'Em Doon" mine. Later a second drift, the Bothal Barns, was driven approximately two-and-a-half miles south west of the colliery on the outskirts of the village of Bothal. While the Coneygarth drift was a coal-drawing drift, the Bothal Barns was used purely for the purposes of man-riding.

There was a history of pits opening, closing and re-opening for a different purpose and that is perhaps what was happening at Seaton Delaval.

Further reading of the "Collieries of Northumberland and Durham" revealed that my theory that Hastings Pit was indeed a drift mine connected to the Hartley (Hastings Pit). This photo of the entrance to the drift was also discovered: 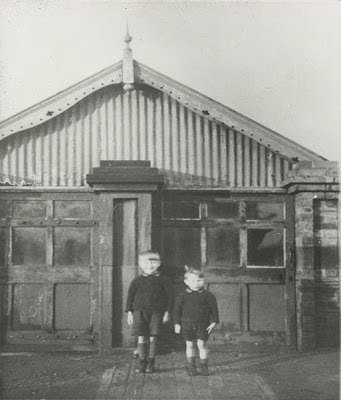