The Witches of... Northumberland

Trawling through the dark recesses of my memory recently I recalled reading some time ago about a witch having been executed at Seaton Sluice. I never did get around to investigating this more fully, so today was the day.

An internet search revealed this from the Wallsend Local History Society website, which in turn is a facsimile of the Monthly Chronicle: North-Country Lore and Legend from April 1888:


We can therefore only give a plain, unvarnished, prosaic account of the affair, as it used to be told, doubtless with much more pith than we can put into it, by that extraordinary humorist and mystery-man, Sir Francis Blake Delaval.
At what definite period the witch adventure took place it is impossible now to tell. Sir Francis died in 1771, and already in his clay it was "once upon a time," and "one of the Lords of Seaton Delaval," without further specification as to when and to whom it occurred. The adventurer, whoever he was, is said to have been returning home from Newcastle after nightfall...

The whole story is quite lengthy, but to summarise, Lord Delaval forced his way into Wallsend Church to find a bunch of "old hags" involved in a ceremony involving a naked young girl lying on a table and some knives. They fled, but Delaval managed to capture one, tie her up and transport her to Seaton Delaval. She was tried and found guilty of witchcraft. Her punishment was to be burned alive on Seaton Sluice beach. But there's more... Standing ready to be burnt at the stake she was granted a last request. To quote again:

...the witch requested to have the use of two new wooden dishes, which were forthwith procured from the neighbouring hamlet of Seaton Sluice. The combustibles were then heaped on the sands, the culprit was placed thereon, the dishes were given to her, and fire was applied to the pile. As the smoke arose in dense columns around her, she placed a foot in each of the utensils, muttered a spell, cleared herself from the fastenings at the stake, and soared away on the sea-breeze like an eagle escaped from the hands of its captors. But when she had risen to a considerable height, one of the dishes which supported her lost its efficacy from having been, by the young person who procured them, dipped unthinkingly in pure fresh water; and so, after making several gyrations, the deluded follower of Satan fell to the ground. Without affording her another chance of escape, the beholders conveyed her back to the pile, where she perished amidst its flames.

Now, in our enlightened times we wouldn't take this tale at face value. But could it, in fact, be based on a real event?

The 1735 Witchcraft Act, which made it illegal to accuse anybody of possessing magical powers is described in a Wikipedia article:


The law was "a heavy-handed piece of Enlightenment rationalism", designed by supporters of the new rationalist theories who believed that, contrary to popular belief at the time, "witchcraft and magic were illusory", and the law was therefore designed to "wean" the public out of a belief in them.

The peak of the witch hunts in Europe was between 1580 and the 1630s. There was "widespread hysteria that malevolent Satanic witches were operating as an organized threat to Christendom."

From the Special Collection of Newcastle University we learn:

Witch-hunters were often employed by a town council or minister when there were suspicions that witchcraft was taking place. Accusations of witchcraft were often based on limited evidence. In 1649, Newcastle upon Tyne employed a famous Scottish witch-hunter who was paid according to the number of witches he caught, meaning that it was in his best interests to find as many examples of black magic as possible. The local magistrates encouraged people to report suspicious behaviour, which provided an excellent opportunity to settle old grudges. In total, thirty women were brought to trial and twenty-seven were found guilty. The methods used to determine whether a woman was a witch were primitive and inconsistent. In the Newcastle trials a Lieutenant-Colonel Hobson expressed his doubts over the methodology used and demonstrated that the evidence was flawed:

…therefore he would try her; and presently in the sight of all the people, laid her body naked to the waist, with her clothes over her head, by which fright and shame, all her blood contracted into one part of her body, and then he ran a pin in her thigh, and then suddenly let her coats fall, and then demanded whether she had nothing of his in her body, but did not bleed, but she being amazed, replied little, then he put her aside as a guilty person, and child of the devil, and fell to try others whom he made guilty.

Lieutenant Colonel Hobson, perceiving the alteration of the foresaid woman, by her blood settling in her right parts, caused that woman to be brought again, and her clothes pulled up to her thigh, and required the Scot to run the pin into the same place, and then it gushed out of blood, and the said Scot cleared her, and said she was not a child of the devil.


"So soon as the witch finder had done in Newcastle, and received his wages, he went into Northumberland, to try women there, where he got of some three pounds a-piece; but Henry Ogle, Esq. laid hold on him, and required bond of him, to answer the sessions, but he got away for Scotland, where he was apprehended and cast into prison, indicted, arraigned, and condemned for such like villainy exercised in Scotland, and upon the gallows he confessed he had been the death of above two hundred and twenty women in England and Scotland, for the gain of twenty shillings a-piece."— Cardiner, p. 116, Newcastle Ed. of 1796.

Gardiner, in his "England's Grievance of the Coal Trade," printed in 1655, also gives a detailed account of this horrid affair. 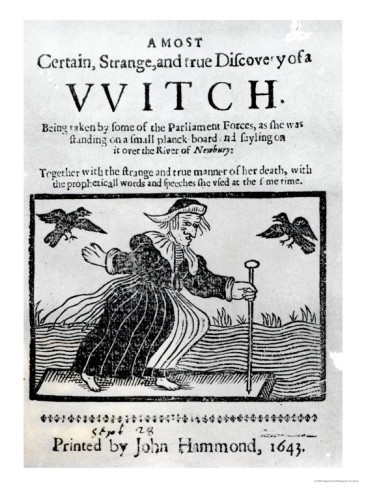 So violent was the popular rage against these supposed wretches, who had sold themselves to the devil, that great numbers were burnt in Scotland; and in a village near Berwick, containing only fourteen houses, fourteen persons were punished by fire!

In 1590, in the Scottish village of North Berwick, the trials of more than one hundred suspected witches were held. One of the accused, Agnes Sampson was taken to Holyrood House and personally tried by the King. Under horrific torture she confessed and was executed. It is estimated from records that 3000-4000 witches were executed in Scotland between 1620 and 1680.

So did it really happen? Prior to 1604 and the passing of a witchcraft act of Parliament witches would have been tried in an ecclesiastical court of the parish church. Summary justice was often overlooked, but after this date witchcraft was tried at the Assizes which were held in Newcastle once per year by travelling judges directly accountable to the monarch. It was also common after this date for witches to be hung rather than burnt to death. A lord Delaval probably did not have the authority to carry out this death sentence unless it was perhaps at an early date. More investigation is needed on this one though...


Very interesting indeed. A few years ago I was told that "witches" were routinely taken onto the beach at Seaton Sluice,  tied  to stakes in the sand & left to drown. Haven't been able to find anything in the history books so would be interested to see any further revelations. I was told that in "olden times" a charnal house was located roughly where Astley Gardens now stands, but again have no evidence.

What more could I find out about justice, punishment and Seaton Sluice in former times?

The Stewartry Museum in Kirkcudbright, Scotland holds a document listing the accounts for the execution of  Elspeth McEwen, who was executed at Silvercraigs, a hillside overlooking Kirkcudbright, on August 24th 1698. A poor and old woman, she was condemned as a witch and sentenced to be burned to death. She was the last witch to be executed in Scotland after having being found guilty at a civil trial.

This was before the Act of the Union however, and England had its own legal system. The Wikipedia article "Witch Trials in the Early Modern Period" states:

The sentence generally was death (as Exodus 22:18 states, "Thou shalt not suffer a witch to live"). Nearly always, a witch's execution involved burning of their body. In England, witches were usually hanged before having their bodies burned and their ashes scattered. In Scotland, the witches were usually strangled at the stake before having their bodies burned—though there are several instances where they were burned alive.

A common perception regarding the execution of a witch, including mine, is of tying to a stake and being burned alive, but it seems this was not the norm. In fact, where this is the case the executions often gain some notoriety as in the case of the Belvoir Witches burned alive at Lincoln in 1617.  Campaigners are still petitioning the Government to have them pardoned. There were many different types of execution traditionally reserved for different types of crimes and different social classes. Pirates were sometimes hung in a gibbet and tied with chains at a place where the rising tide would submerge them. In the Wapping area of London there is a place known as Execution Dock where this practice was carried out. The pirate Captain William Kidd died here by this method in 1701. However, I can't find any mention of a witch being executed by this method.

The historian Ronald Hutton has calculated that between 300-1000 witches were executed in England and Wales. Only 228 were officially recorded.

Special places were traditionally reserved for executions and the Town Moor at Newcastle would appear to be one of these. They were often close to the gaol in which prisoners were held. However, the term gallows and gibbet can be used synonymously. It was sometimes the case where a body, after execution, was taken to a place and hung up on a gibbet. The place was sometimes in site of the crime scene, or a strategic place where the decomposing remains would act as a deterrent to passers-by. There is an example near Elsdon where a replica of Winter's Gibbet still remains as an eerie site on the hilltop. There are also many examples of fields named as Gallow's Hill on estate and tithe maps of the late 18th - early 19th centuries including one at Burradon, six miles north of Newcastle.

The story of the Seaton Sluice witch sounds like a one of mob rule and summary justice. The major landholding aristocracy had been handed powers to use capital punishment through their manorial courts during the Norman period. A huge range of offences were subject to capital punishment but at manorial level it was mostly stealing that carried this sentence. Major crimes were dealt with by justices of the peace or the central justices at the assizes.

From the 14th century until the early 17th century the unruly border area had some of its own separate laws and customs. Wardens were appointed to police and administer the area on behalf of the monarch. They had special powers to authorize capital punishment in certain circumstances. The Delavals, although a powerful family, were not wardens and could not carry out summary justice without fear of being held to account for any such actions.