I have known about this site, lying halfway between Widdrington and Druridge, for some time and have meant to visit and explore more fully, but never got around to it. The guide books indicate that it was once a site of the Knights Hospitallers, a monastic military order, and were they not that mysterious lot featured in the "Da Vinci Code"? 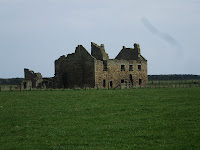 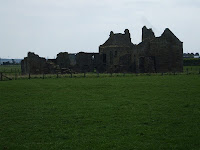 So... a visit was recently made and for long-since abandoned medieval buildings my first impressions were that the ruins were in remarkably good condition. The site is protected by a fence and is not accessible. From a distance of fifty or so metres what is visible is a two-storey house with more ruinous out buildings to the east of this.

To summarise both the The Sites and Monuments record at http://www.keystothepast.info/Pages/pgDetail.aspx?PRN=N11884 and Nikolaus Pevsner in his Buildings of England series:

...a small farm owned by the Knights Hospitallers. The community in 1338 numbered eleven. It was first recorded in 1313, and it was abolished in 1540 and all its lands were taken over at the Dissolution. Today, there are two main buildings to be seen here: the chapel and the house, which form two sides of a courtyard. A moat, approximately 100 metres in diameter, enclosed the site but was destroyed by mining activity  Part of the chapel was used as a pillbox during World War Two (1939-45). The preceptory buildings have undergone a period of repair and restoration by Northumberland County Council. The site is now a Scheduled Monument. The house probably dates to the 1550s when Sir John Widdrington took over the site for a dower house. The only remains of the Preceptory are the ruinous chapel although the house is an interesting building in its own right.

Could I find out more of who exactly were the residents here, what were their daily activities and why did they choose this site?

The Hospitallers arose as a group of individuals who had founded a hospital in Jerusalem around 1023 to provide care for the poor, sick or injured pilgrims to the Holy Land. After the Western Christian conquest of Jerusalem in 1099 during the first crusade the organisation became a religious and military order and it was charged with the care and defence of the Holy Land. It was one of several military orders. The Knights Templar are another such military order and it was this group that is associated with the "Da Vinci Code". This order was disbanded in 1312. On the suppression of the Templars in 1308, efforts were made by the Hospitallers to get themselves declared heirs to the Templar possessions, their claim being supported by the pope. Chibburn Preceptory was, it would appear, an original possession of the Hospitallers, however, as it is not mentioned on a document concerning a land dispute on Widdrington estates from the early 14th century.

The Hospitallers had gained great respect during the 12th century and were granted many parcels of land by which the organisation could support itself. The powerful Widdrington family had obviously granted a parcel of their Widdrington estate. This was not uncommon. Many such farms, although many of them smaller than Chibburn, were also granted to the Hospitallers. The organisation was comprised of combatant and non-combatant bretheren. The non-combatants under the supervision of a Preceptor would generate an income for the organisation through farming, fishing and mineral extraction. They would also deal with the administration and the religious duties of the monastic organisation. the preceptories were also used as training camps. English Heritage gives this information on its website regarding a similarly protected site at Sutton-at-Hone in Kent: http://list.english-heritage.org.uk/resultsingle.aspx?uid=1009021

A preceptory is a monastery of the military orders of Knights Templars and Knights Hospitallers. Preceptories were founded to raise revenues to fund the 12th and 13th century crusades to Jerusalem. [Preceptories] of the Hospitallers provided hospices which offered hospitality to pilgrims and travellers and distributed alms to the poor. Like other monastic sites, the buildings of preceptories included provision for worship and communal living. Their most unusual feature was the round nave of their major churches which was copied from that of the Holy Sepulchre in Jerusalem. Indeed their use of such circular churches was unique in medieval England. Other buildings might include hospital buildings, workshops or agricultural buildings. These were normally arranged around a central open space, and were often enclosed within a moat or bank and ditch. From available documentary sources it can be estimated that the Templars held 57 preceptories in England. At least 14 of these were later taken over by the Hospitallers, who held 76 sites. As a relatively rare monument class, all sites exhibiting good survival of archaeological remains will be identified as nationally important.

This is an interesting site and it was a surprise to me while researching this article that there isn't an easily accessible and simple guide to the site or better access as it is clearly of some importance.
Posted by Alan Fryer at 14:20