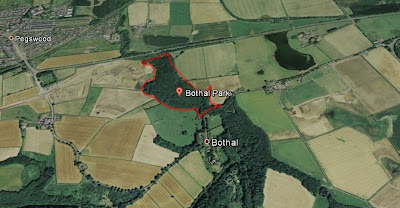 John Speed's 1610 map of Northumberland is cartographically immature as compared to the accuracy of modern-day maps. No roads are displayed and settlements are displayed as symbols. Features that are prominent, however, when looking at the South East Northumberland section of the map, are fenced enclosures around such places as Bothal, Cockle Park and Mitford. These villages had a greater importance in the middle ages than nowadays, being the centre of the estates of important landholders and the location of their castles. The enclosure at Bothal appeared to cover a huge area on Speed's map, possibly even the size of the whole estate. 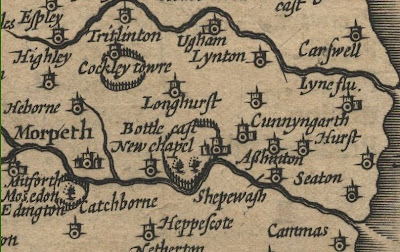 Recalling my history lessons I remembered that the gentry enjoyed hunting and parks were often made for this exact purpose. I suspected they were medieval deer parks. But was this the case? Who commissioned the parks and why? How large were they? How was the land used within it and how did this alter the management of the estate at Bothal if it did cover all of the available farming land? Were they really enclosed by a fence? The term "park" still occurs on some features shown on modern mapping. Surely this was a clue to the former land use?

The main landholders of Bothal during the Middle Ages were the Bertrams. This is from a Wansbeck District Council planning document of 2008:


The Bertrams were Lords of Bothal from the late twelfth century until 1406. It is thought there was a building on the site of the present castle by around 1150, known as a manse or mansum (nothing of which survives) and likely to have been fortified before the Norman Conquest. It was not until 1343 that Robert Bertram IV, high sheriff of Northumberland, was given a licence to crenellate.

According to Richard Lomas in his book "North East England in the Middle Ages" thirty-six of these parks have been identified in Northumberland, and although more research needs to be done in this area, they were created between the beginning of the twelfth and middle of the thirteenth centuries. Most parks were between 100 - 200 acres in size, although Hulne Park, created at Alnwick by the Duke of Northumberland, is larger.

To establish a deer park a Royal licence was required. Because of their cost and exclusivity, deer parks became status symbols. Since deer were almost all kept within exclusive hunting reserves used as aristocratic playgrounds, there was no legitimate market for venison. Thus the ability to eat venison or give it to others was also a status symbol. Consequently, many deer parks were maintained for the supply of venison, rather than hunting the deer.

The landscape within a deer park was manipulated to produce a habitat that was both suitable for the deer and also provided space for hunting. "Tree dotted lawns, tree clumps and compact woods" provided (pasture) over which the deer were hunted and wooded cover for the deer to avoid human contact. The landscape was intended to be visually attractive as well as functional. [Wikipedia]

The park was according to Lomas a securely enclosed area by means of a ditch and bank and stone wall or quickset hedge. Nationally, it would appear that a palisade fence was often used to surround the deer park, but in the North stone walls were the most common method. Speed may have used a common fence symbol in all his mapping of Great Britain for reasons of uniformity. 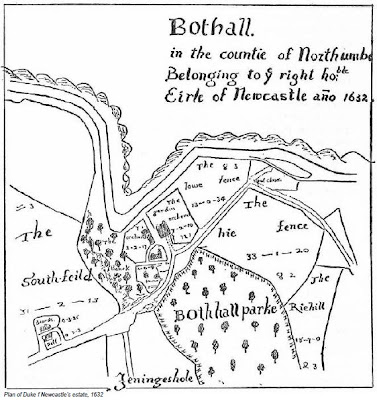 Fortunately the owners of Bothal in 1632 commissioned a survey and had a plan made of the estate. At first glance it looks like most maps of the time: a mere sketch. But overlaying this on to modern satellite photographs it is surprisingly accurate. And, the estate does not appear to have altered greatly over a four-hundred year period. Bothal Park corresponds almost exactly with the modern-day Park Wood. This is only 1.1 miles in circumference and takes only a fraction of the estate leaving plenty of land for arable use. Speed, on his map, had given Bothal Park a greater prominence than it deserved. The woodland still remains today uncultivated and can be enjoyed by walkers.