A mansion house once stood on the site of the recently demolished North Farm at Newsham, very near to the present grounds of Blyth Town FC. In fact, North Farm was a stone-built building and it is possible that the materials from the mansion house were reused in the construction of the new farmstead. 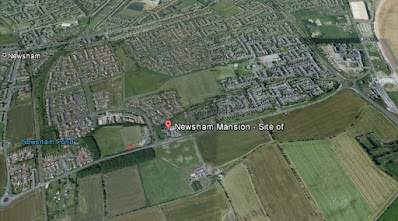 John Wallace writes of it in his “History of Blyth” published in 1863:

“John Ogle occupied the mansion house at Newsham in 1581, and farmed the estate, and indeed the Bebside estate as well, of which he was proprietor. This wealthy gentleman, ...of the house of Ogle, was second son of Sir William Ogle, of Cockle Park…”

“This mansion is still standing, and has long been occupied as a farmhouse by the Wilson family. It presents a fine example of the dwellings of the lesser gentry of 300 years ago. Its massive walls, five feet thick, and stout oaken beams, give evidence that the builder intended it to serve more than one generation of tenants. To see it is well worth a journey to Newsham. It has little outward attraction, but the interior examined with a reference to the Inventory of John Ogle, will amply repay the labour.”

“After the Cramlingtons had finally abandoned their connexion with Newsham, their mansion became a farmhouse upon the Ridley estate. It stood on the site of Newsham North farm, on the north side of the road leading inland from the Link-house and at the east end of the present hamlet of South Newsham. Unhappily it was demolished about the year 1880, and little information can be gathered respecting its architectural features. Warburton, writing about the year 1720, describes it as 'an ancient structure but something ruinous.' So far as can be ascertained, the hall was a plain structure of sixteenth century date. The main building was two stories in height, and was flanked at one end by the pantry, and at the other by the dairy, which communicated with the stables and other farm buildings at the rear of the house.” 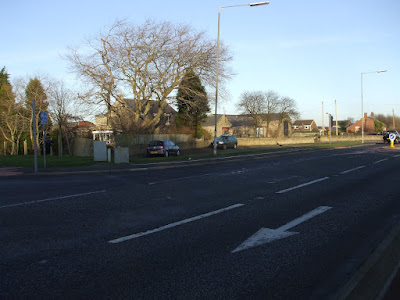 The historic area of Newsham was roughly bounded by Meggies Burn to the South, Plessey Road to the North, the sea to the East and just a little way further than the rail line to the West. The manor, after some legal wrangling in the 13th century, became fully the property of the aristocratic Delaval family of nearby Seaton Delaval.

By 1311 Newsham had been granted to the second son of Lord Delaval. It became a family custom to grant the manor to a younger scion of the family.

The legal dispute involving the Delaval family mentions a manor house and a small hamlet being present at Newsham in 1208, but 19th century historians quoted above believe that the mansion house was built in the 16th century, although it is possible it may have been on the site of the earlier manor house.

In 1461 the junior male Delaval line died out and the estate came by marriage in the female line to the Cramlington family of Cramlington. There was a degree of dispute between the Cramlingtons and more senior Delaval family members as to ownership, each claiming respective title to the estate. The case came to court in 1536. Cramlington won the case and Lord Delaval signed a deed releasing all claims to Newsham.

Landowner, Thomas Cramlington, died in 1573. He was under twenty one years of age. The estate was inherited by another male family member, but his widow, Anne, was by law and custom allowed to retain one third of the manor as a dower for the rest of her life. She remained living for over fifty years at the mansion house which, if the historian’s analysis is correct, was built in the earlier part of that century.

Anne remarried, first to Edward Delaval of Tynemouth and then another junior member of a local gentry family, John Ogle, as mentioned in the quote by Wallace at the beginning of the article.

Ogle died leaving a will. An inventory was also made of his possessions. From the early 16th century to the late 18th century it was the custom of the ecclesiastical courts that proved wills to insist that the executors should appoint two or three local men to make “a true and perfect inventory” of the personal estate of the deceased, so that any dispute over the will could be more easily settled. The inventory was then filed with the will. The appraisers proceeded to list every item of furniture and utensils in the house, often room by room. Then they noted livestock, crops, equipment, tools, clothes, ready money and whatever else was moveable. Ogle’s inventory is a fascinating and lengthy document but it lists the rooms of the mansion house, which were:

Chamber over the parlourBy 1635 Robert Cramlington was the occupier of the house and estate and was titled “squire” on a report filed to the Justices of the Peace when a Spanish Privateer vessel took refuge in Blyth harbour from a pursuing Dutch Man-o-war ship. Cramlington was sent for by the frightened inhabitants of the port and rowed across the river to speak with the captain just as the Dutch ship opened fire bombarding the port with cannonballs.

Because they had fallen on hard times the Cramlington family sold the estate in 1695 to Ralph Brandling of Felling and Nathanial Wyresdale, a draper of London. They did, however, lease half of the premises from the new owners but their final connection with the manor came in 1700 when the estate was sold to the Radcliffe family.

Colonel Radcliffe was also known by the title Earl of Derwentwater. The Radcliffes were a long established aristocratic Catholic family from Dilston Hall in the West of the county of Northumberland. The Colonel died in 1705 and the estate was left to his sister who in a document of 1717 listed the mansion house and land being leased to Margaret Robinson, a widow and the mother of Lady Susanna Delaval, for £36 per year. A certain Madam Errington is stated to have been in occupation of the house previous to then in 1715. The Erringtons were also a well established Catholic landholding family from West Northumberland. The Radcliffes were involved in the rising against the monarch to install a Catholic Stuart on the throne. When this failed their lands were confiscated.

The Ridley family purchased the estate and set about developing the port and town of Blyth. The mansion house was leased as a farmhouse but eventually pulled down and rebuilt. The 1st edition OS map of c1860 shows the buildings as they would have been prior to demolition in 1880. 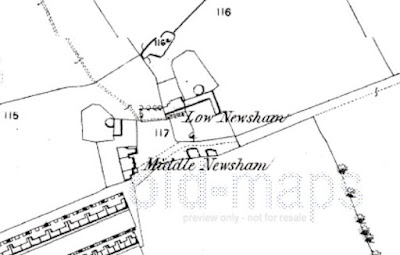