Browsing Armstrong's 1769 map of Northumberland  I noticed a large circular feature marked in the landscape just North of Morpeth. The feature is larger than the town itself, which I first suspected was down to the inaccuracy of the cartographer. It did sufficiently interest me, however, to see if the feature is still visible in the landscape. Satellite imagery confirmed this to be the case and my first thought was that it is probably a racetrack. A hedge and fence mark the line of the feature in the present day.

The feature is 1.15 miles in circumference and is located just north of St George's Hospital and Cottingwood Lane on an area historically known as Cottingwood Common.

Research in the "Keys to the Past" sites and monuments website for Northumberland and Durham revealed:


Although the town was a centre of trade for the surrounding countryside, the citizens of Morpeth enjoyed their leisure hours. In 1730 they built a racecourse for horse racing. It was still in use in the mid-19th century. It only fell out of use when the asylum was built. The area around the two castles became a park in the late 19th century, and the people were able to follow riverside walks along the Wansbeck.

Internet searches aimed at racing websites yielded this from greyhoundderby.com


The earliest recorded racing in... Morpeth was in 1720... and racing certainly took place prior to 1720. The course... [was] approached by a steep but narrow road. This would have meant that carriages would have found it difficult to access the course. Baily’s Racing Register first provided detailed results from races held at Morpeth in 1730, with the meeting being held in September... It is known that the famous poet, Lord Byron, owned horses which ran at the track in the early and mid-1750’s. By 1800 the only Northumbrian meetings to be sufficiently important to be included in Sporting Magazines and Racing Calendars were Morpeth and Newcastle. Racing ceased at the Collingwood course in 1854, and it took a further 17 years to re-establish racing at Morpeth. The new course, just ¾ of a mile from the town centre, was on Morpeth Common and included a grandstand which was opened by Robert Wilkinson, the Mayor of Morpeth, on 10th September 1875.  http://www.greyhoundderby.com/Morpeth%20Racecourse.html [This site lists some memorable races and winners on the track]

Subsequent editions of mapping all the way down to the 1970s and 1980s have shown the site to be reasonably well preserved. It is only in this latter period that buildings begin to be shown on the on the central part of the site and foliage masking the course. The site of the course does not seem to interfere with the asylum (now St George's hospital) so it is a question for further research as to the track's demise and, in fact,   horse racing in general  in 17th-18th century Northumberland.

So... this one tantalisingly posed more questions than it answered. And, quite by chance, some further information on racetracks came my way.

A flyer is featured on the www.communities.northumberland.gov.uk website advertising "The Amble Races" to be held on Monday August 20th 1888. Twenty people are listed as officials for the race meeting. We can therefore presume that it wasn't too small-scale an affair. Searching the OS mapping even from just a few years after 1888 revealed no trace of a racetrack in Amble. An appeal was made to Amble folk on Twitter for any info, most of whom were surprised to hear of a racetrack once existing in the town. A comment was returned from an elderly resident that horse racing and fairs used to be held during feast week at Mark's Bridge, which is now the site of the middle school. Modern satellite photography actually shows a racetrack pattern etched into the school playing field. 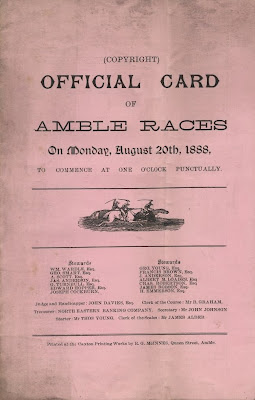 A visit to the small museum of Belford in North Northumberland brought me face to face with another flyer for a now-defunct racetrack. This was from 1803 and titled the "Belford Feast Races". It featured many categories of races including one for ponies.

A colleague emailed me to enquire if there had ever been a racetrack at Allendale. He was staying at a cottage which was rumoured to be on the site of an old racetrack. A look at the 1st edition OS mapping of the 1860s did show a racecourse to be marked at this location. It was not a very clear feature, however, and was not evident on subsequent mapping.

There was also evidence from 19th century mapping of a racetrack having existed on the links at Blyth. It is no longer in existence, but one weekend every summer a horse event is held at this location. This indicates a continuity of the tradition of equestrian activities being held there.

It would appear from this evidence that most towns in Northumberland had a racetrack at sometimes during the 18th-19th centuries and that racing was often held on public holidays. I am making a presumption here that the racetracks served mostly a local population as it would have been impractical and expensive to transport horses to a larger and more central course as happens nowadays at say Gosforth Park.

The racetracks were clearly small-scale affairs. They did not leave much of a trace on the ground and there was no indication of buildings on contemporary mapping. Again, a presumption can be made that temporary structures or tents would have been erected for the race meetings. This continues until this day on some sites, although on a more ad hoc and informal basis.

This is also the case at Morpeth where the racetrack was moved out to Tranwell Woods and point-to-point racing is still held here. Point-to-point is a form of horse racing over fences for hunting horses and amateur riders.

Horse racing is now the second most popular spectator sport in the country. But it didn't really become a mainstream activity until the mid 18th century. Cromwell had the fledgling sport banned, and horses confiscated, during the 1650s. Even in the 1740s Parliament passed an act trying to restrain the increase in horse racing. The law was largely ignored however, and in 1752 the aristocracy, wealthy breeders and racecourse owners formed the Jockey Club and introduced regulations.

The smaller racecourses became no longer viable during the 19th century and the race meetings ceased.
Posted by Alan Fryer at 14:02