In the section about Seaton Delaval Township in the the Northumberland County History series, published in the early 20th century, this paragraph caught my eye:


In all probability Seaton Delaval township contained at one time over three thousand acres; but only a small portion of this can have been cultivable. Barren sandhills and links still line the shore; scrub covers the northern slopes of Holywell dene and, on every other side, a broad belt of moorland once separated Seaton Delaval from the neighbouring townships.
Indeterminate boundaries, such as these, had to be more closely defined. The township limits were carefully marked out by march stones, and were perambulated once or twice yearly by the tenants of Seaton Delaval. Bounders of Seaton Delaval and Whitridsre commons are entered on the court rolls for 1533... 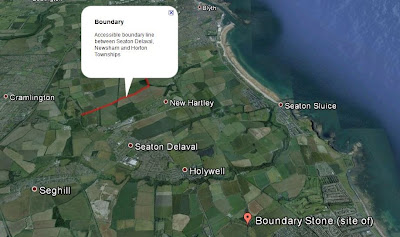 What the writer is saying is that the inhabitants of  Seaton Delaval had a limited amount of good farm land and could not afford to lose any due to encroachment of their neighbours, which in this case would be of Hollywell and Horton townships.

A township in pre-modern times was a division of a parish similar in area, and geographical location, to County Council wards today.

Natural features, such as rivers and streams, were often used (and still are) to determine boundaries. When the passage talks of indeterminate boundaries the writer is referring to an artificial dividing line usually in a straight line across open land where a convenient natural feature did not exist. It would be necessary, of course, to mark this boundary and to keep the line maintained which is what the passage refers to.

The questions which immediately intrigued me were: Where were the boundaries? Do any stones still exist? What size, shape and form did the stones take?


The Northumberland County History volume handily provided the answer to the first question with a map of township boundaries and a written description from the 1533 court roll. I was able to overlay this information on to modern satellite and mapping imagery. A good number of these "indeterminate" boundaries were identifiable, but surprisingly not many were accessible. I had been expecting that they would also be the course of paths, but that is rarely, it seems, the case. The boundary between Horton and Blyth is noticeable by what appears to be quite an ancient hedge, but is not accessible. This can be viewed when entering South Newsham on the Laverock Hall Road to Blyth. However, one line between Lysdon Farm and East Cramlington, via the Keel Row public house just North of New Hartley, seemed a perfect candidate to explore. Braving the snow I went in search of boundary stones, but none were found. It was probably extreme wishful thinking anyway considering the amount of agricultural and mining activity that has occurred in that area for the past 500 years. It was noticeable that the boundary line is on a earthen rampart with a modern hedge growing along its line, which compares to the other side of the path which is not on a rampart.

Then I read from the same Northumberland History book of a stone that was still in existence at Hollywell in the early 20th century:

This is near the site of the Bee Hive Public House and this intrepid explorer, machette in hand and wellies on my feet, set off in search of the "sixteenth century bounder". The search, however, proved to be fruitless.

It could become a lifetime obsession to find one of these stones locally, but scanning the Ordnance Survey mapping I can't find any as yet to still be in existence.

Presumably the stones must have been a reasonably substantial size so as not to be moved easily, and possibly carry some kind of marking relating to what they were.

The famous Scots Dyke border line came to mind as this was made in the sixteenth century separating England and Scotland across the "Debateable Lands". A Wikipedia article had this to say:

They no longer exist, however, and were probably quite substantial, being used to mark a national borderline. Another search on internet sites revealed that many boundary stones still exist in England and Scotland in relatively unspoiled rural areas. They have also been, surprisingly, well preserved in London and its hinterland. They can come in a variety of shapes and sizes from a cube not more than a foot high to a chest-high pillar. Some are elaborately marked. Some may carry a only symbol. Some are unmarked and no attempted has been made at carving the stone into a shape.

Will we ever find out what form our South East Northumberland stones took?

A search in the sites and monuments listings found on the www.keystothepast.info website and on the English Heritage listings of scheduled monuments revealed around 40 surviving stones surrounding the parish of Edlingham. This is a little way west of Alnwick and a short distance north of Rothbury. The stones date from the 18th century and are usually of the form of local sandstone pillars slightly rounded at the top. Initials are carved onto both sides of the stone indicating the name of the landowner for Edlingham parish and its adjacent neighbour, eg S for the Swinburne family or WD for William Davison.

There are also around another 450 examples of boundary stones, or markers, in other rural areas of Northumberland.

It was in the urban area of South-East Northumberland that I was most interested, however. Could any have survived the building and industrial development in the area? No boundary markers appeared to have been listed. But quite by chance I happened to be looking at an estate map of the Bedlington Iron Works from the 1840s. This showed a boundary stone very close to the banks of the River Blyth. It was a long shot that it may have survived, but I set off in search of it hoping that, although it may not be in-situ, it could have been re-used in another structure or fallen into the river. I didn't find it. I did say it was a long shot!